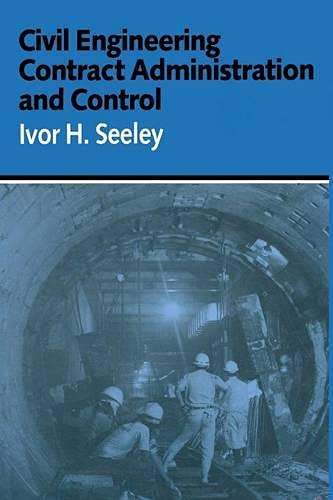 This volume considers the general background to civil engineering works and contracts, including funding, preliminary investigations and the preparation of engineers' reports. The form and purpose of the various contract documents are examined, and the principal requirements of the ICE conditions summarized and explained. The principal tendering arrangements are described and compared, together with the more commonly practised approaches to estimating the cost of civil engineering works. One of the major problems encountered in the operation of civil engineering contracts is a weakness in communication between parties to the contract and site personnel. Vital communication requirements are described and illustrated, including the preparation of site documents and records, and the purpose and conduct of site meetings. The method of measuring and valuing civil engineering works is explored and this encompasses the use of daywork, issue of interim certificates, settlement of final accounts, valuation of variations and financial control of contracts. Finally, the book examines the background to contractors' claims and how they should be presented by the contractor and dealt with by the engineer. It also examines the effect of European Community harmonization arrangements, and discusses the operation of quality assurance in civil engineering.