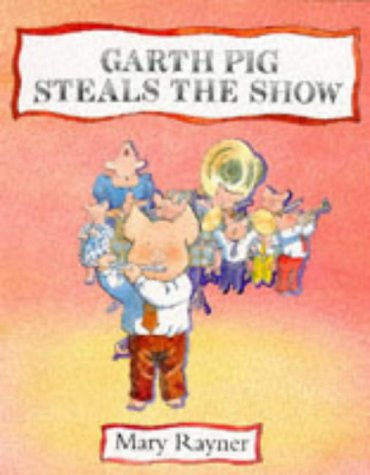 During a musical concert for the mayor, the family Pig Players discover that their newest member, a lady sousaphonist, likes pigs just a little too much

Kindergarten-Grade 3-- Rayner's indomitable pig family is back, this time as musicians who have been invited to do a charity concert at the Town Hall. But the 10 piglets are too small to play big instruments, and Father Pig advertises for someone to provide them with a much-needed booming sound. While Father is too preoccupied with last-minute concert preparations to notice, young readers will immediately recognize that the volunteer who shows up is nothing but a wolf in a sousaphone player's clothing. And with that, they're off on a riotous evening. Father Pig conducts his group with serious dignity, while Mother, a "performer to the tip of her tail," sings her heart out. Only William senses danger and when he notices that Garth's seat is empty, decides, literally, to take the concert into his own hands. Rayner's whimsical watercolors depicting a lip-smacking musician and two trotters sticking suspiciously out of his sousaphone are superbly suited to the humorous text. What fun to be in on the deception all along and to cheer William on to save the day--ah, night. This performance definitely deserves an encore!-- Marianne Saccardi, Whitby School American Montessori Center, Greenwich, CT
Copyright 1993 Reed Business Information, Inc.

The popular porcine family ( Mrs. Pig Gets Cross ; Garth Pig and the Icecream Lady ) forms a band and makes its musical debut. Realizing they need a large animal to play "the big, deep things," the Pigs advertise for a sousaphone player. Readers will become suspicious far sooner than do the musicians when a hairy, long-nosed creature who hides behind her instrument case offers to play for free. During the much-heralded first performance, Garth Pig gets sucked into the bowl of the great instrument and only a sousaphone solo (ingeniously engineered by brother William) can save him. With "a deafening blast," Garth is catapulted across the stage and into stardom (for "the audience thought it was part of the act, and there was a thunder of applause"). Though somewhat wordy for a simple outfox-the-fox (or wolf) tale, the story contains the strong familial elements and gentle humor that fans of the previous Pig stories have come to expect. As a bonus, Rayner's typically cheerful pen-and-wash illustrations include individual depictions of various band instruments. Ages 4-8.
Copyright 1993 Reed Business Information, Inc.

Book Description Paperback. Condition: Good. The book has been read but remains in clean condition. All pages are intact and the cover is intact. Some minor wear to the spine. Seller Inventory # GOR000878398

Shipping: US$ 8.63
From United Kingdom to U.S.A.
Destination, rates & speeds