Items related to The Case of Peter Pan: Or the Impossiblity of Children's...

Rose, Jacqueline The Case of Peter Pan: Or the Impossiblity of Children's Fiction (Language, Discourse, Society)

The Case of Peter Pan: Or the Impossiblity of Children's Fiction (Language, Discourse, Society) 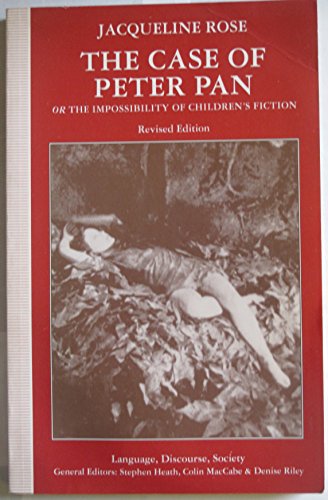 What is the meaning of Peter Pan -- not for J. M. Barrie, but for the thousands who have continued to purchase for children version after version of the story and who have faithfully attended the productions of the play? What does Peter Pan have to say about our conception of childhood, about how we understand the child's and our own relationship to language, sexuality, and death? What can Peter Pan tell us about the theatrical, literary, and educational institutions of which it is a part?

These are some of the questions this book attempts to answer. Shifting attention away from J. M. Barrie, the originator of Peter Pan, it asks instead what is the nature of our own desire or investment in this phenomenon of our culture. In the course of her investigation, Jacqueline Rose identifies behind Peter Pan a fantasy of childhood which she traces back through the history of children's fiction, forward to modern critical commentaries on children's writing, and into some of the most contemporary writers of books for children today.

Originally published in 1984, The Case of Peter Pan is now widely available in the United States for the first time. Peter Pan, Rose contends, forces us to question what it is we are doing in the endless production and dissemination of children's fiction. In a new introductory essay written especially for this edition, Rose considers some of Peter Pan's new guises and their implications. From Spielberg's Hook, to the lesbian production of the play at the London Drill Hall in 1991, to debates in the English House of Lords, to a newly claimed status as the icon of a transvestite culture, Peter Pan continues to demonstrate its bizarre renewability as a cultural fetishof our times.

"Rose's searching arguments are complex and concentrated. This is the book children's literature has needed for some time. It combines scholarly examination of primary sources with historical commentary, the social history of childhood and critical theory derived from psychoanalysis. . . . It is a challenge to critics to examine the whole range of cultural practices attached to stories for children."—London Review of Books

"Everyone interested in the way in which the balance of power between adult and child in our society is expressed in the books offered by the former to the latter should read Rose's study of Peter Pan."—Times Education Supplement

1. The Case of "Peter Pan": Or, the Impossibility of Children's Fiction (Language, Discourse, Society)

2. The Case of "Peter Pan": Or, the Impossibility of Children's Fiction (Language, Discourse, Society)

Shipping: US$ 14.00
From United Kingdom to U.S.A.
Destination, rates & speeds