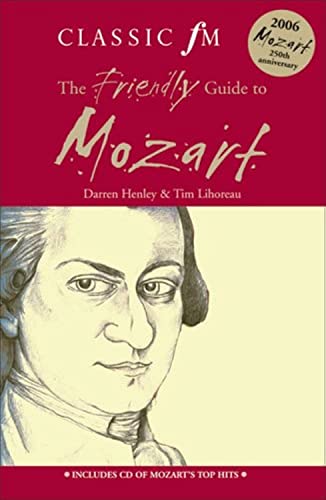 "The Classic FM Friendly Guide to Mozart" will tell you everything you ever wanted to know about this famous composer, who consistently has the most titles in the Classic FM 'Hall of Fame' (a yearly poll of the nation's musical taste: 145,000 listeners took part in 2005). Was he really such a prodigy? Did his father exploit him? Was he murdered by rival Salleri? Why does Mozart's music have 'K' numbers? While giving all the facts about 'The Man' and 'The Music', "The Classic FM Friendly Guide to Mozart" includes lively and light-hearted features, quotes and anecdotes. There are sections about Mozart's "Top 20" hits (with reference to the CD) and about his music in films, and even a Mozart Mood Chart for when you need to raise or lower your blood pressure. Classic FM, the world's largest classical music station (9.5 million listeners per month) have teamed up with Hodder to publish this book, which takes its title from a new 'Friendly Guides' on-air feature. The radio station is marking the 250th anniversary of Mozart's birth in 2006 with many activities on air, on the website and in the Classic FM Magazine.

1. THE CLASSIC FM FRIENDLY GUIDE TO