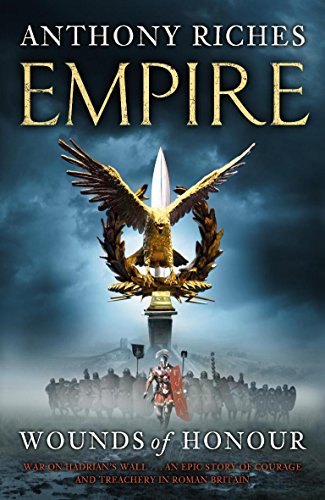 Marcus Valerius Aquila has scarcely landed in Britannia when he has to run for his life - condemned to dishonorable death by power-crazed Emperor Commodus. The plan is to take a new name, serve in an obscure regiment on Hadrian's Wall and lie low until he can hope for justice. Then a rebel army sweeps down from the wastes north of the Wall, and Marcus has to prove he's hard enough to lead a century in the front line of a brutal, violent war.

Anthony Riches began his lifelong interest in war and soldiers when he first heard his father's stories about World War II. This led to a degree in Military Studies at Manchester University. He began writing the story that would become Wounds of Honour after a visit to Housesteads Roman fort in 1996. He lives in Hertfordshire with his wife and three children.

This is fast-paced and gripping "read-through-the-night" fiction, with marvellous characters and occasional moments of dark humour. Some authors are better historians than they are storytellers. Anthony Riches is brilliant at both.―Conn Iggulden

Stands head and shoulders above a crowded field . . . . real, live characters act out their battles on the northern borders with an accuracy of detail and depth of raw emotion that is a rare combination.―Manda Scott

His plots bristle with emotion, realism and electrifying tensions, his multi-layered characters open doors onto the fascinating everyday life of the Roman army and the sense of adventure that underpins the whole series makes each book a fresh source of excitement and enjoyment. Riches knows his stuff and boy does it show . . . While Marcus, his cohorts and the Empire series grow in stature, readers await the next instalment of this challenging and entertaining tour-de-force with a sense of heightened anticipation . . . and armed, of course, with the confidence that once again the 'master of Rome' will not disappoint.―Lancashire Evening Post