Items related to The Regulators 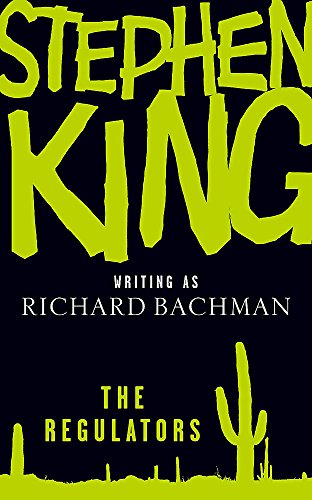 Mystery/SuspenseLarge Print Edition* A New York Times BestsellerCall him Bachman or call him King, the bard of Bangor is going to hit the charts hard and vast with this white-knuckler knockout. starred, Publishers WeeklyThe action is fierce and Bachmans imagination proves boundless. Library JournalEverything is normal on a summer day in Wentworth, Ohio the paperboy is making his rounds, frisbees are flying, barbecues are being contemplated. The only thing that doesnt quite fit is the red van idling up the hill on Poplar Street. Soon it will roll and the killing will begin. And by the time night falls, the survivors of Poplar Street will find themselves in another world. . .

An evil creature called Tak uses the imagination of an autistic boy to shift a residential street in small-town Ohio into a world so bizarre and brutal that only a child could think it up. It's as two-dimensional and gaudy as a kid's comic book, but for this reviewer, The Regulators is a gripping adventure tale about what happens when a mind fixated on TV (especially old Westerns and a cartoon called MotoKops 2200) runs amok. As Michael Collins writes in Necrofile, "[Stephen] King offers his readers a glimpse of the true evil of popular culture ... which has no design or intent, only an empty need to sustain itself. King is, I think, about the canniest observer of what America is, and that he generally writes horror ought to give us pause from time to time."

Book Description Hodder Paperbacks, 2007. Paperback. Condition: Used; Good. **Simply Brit** Shipped with Premium postal service within 24 hours from the UK with impressive delivery time. We have dispatched from our book depository; items of good condition to over ten million satisfied customers worldwide. We are committed to providing you with reliable and efficient service at all times. Seller Inventory # 1085836

Book Description Paperback. Condition: Very Good. The book has been read, but is in excellent condition. Pages are intact and not marred by notes or highlighting. The spine remains undamaged. Seller Inventory # GOR001080066

Book Description Hodder Paperback 2007-06-14, 2007. Paperback. Condition: Good. Item is in good condition. Some moderate creases and wear. This item may not come with CDs or additional parts including access codes for textbooks. Might be an ex-library copy and contain writing/highlighting. Seller Inventory # DS-034095227X-3