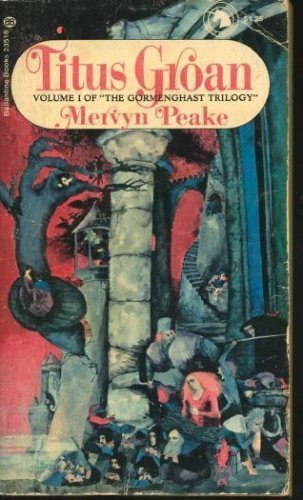 The first volume of the GORMENGHAST trilogy of fantasy novels. Titus Groan is born the heir to Gormenghast castle, and finds himself in a world predetermined by complex rituals that have been made obscure by the passage of time. Along the corridors of the castle, the child encounters some of the dark characters who will shape his life.

Mervyn Peake's gothic masterpiece, the Gormenghast trilogy, begins with the superlative Titus Groan, a darkly humorous, stunningly complex tale of the first two years in the life of the heir to an ancient, rambling castle. The Gormenghast royal family, the castle's decidedly eccentric staff, and the peasant artisans living around the dreary, crumbling structure make up the cast of characters in this engrossing story. Peake's command of language and unique style set the tone and shape of an intricate, slow-moving world of ritual and stasis:

The walls of the vast room which were streaming with calid moisture, were built with gray slabs of stone and were the personal concern of a company of eighteen men known as the 'Grey Scrubbers'.... On every day of the year from three hours before daybreak until about eleven o'clock, when the scaffolding and ladders became a hindrance to the cooks, the Grey Scrubbers fulfilled their hereditary calling.

Peake has been compared to Dickens, Tolkien, and Peacock, but Titus Groan is truly unique. Unforgettable characters with names like Steerpike and Prunesquallor make their way through an architecturally stifling world, with lots of dark corners around to dampen any whimsy that might arise. This true classic is a feast of words unlike anything else in the world of fantasy. Those who explore Gormenghast castle will be richly rewarded. --Therese Littleton About the Author:

Mervyn Laurence Peake (1911-1968) was born and raised in China until the age of eleven. He went on to study at the Royal Academy School in London, where he developed as an artist, designer, and writer. He worked as an artist on the island of Sark for several years and then returned to London to hold several exhibitions. Peake has also published illustrated verse and short stories for children, plays, short stories, and novels.

Audiobook Narrator Bio: Simon Vance is an award-winning actor and an AudioFile Golden Voice with over forty Earphones Awards. He has won thirteen prestigious Audie Awards and was Booklist's very first Voice of Choice in 2008. He has narrated more than eight hundred audiobooks over almost thirty years, beginning when he was a radio newsreader for the BBC in London.