Items related to A Distant Mirror: The Calamitous 14th Century 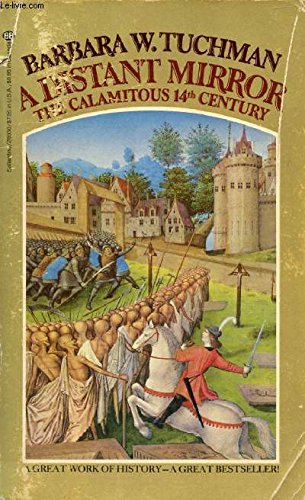 "Wise, witty, and wonderful . . . A great book, in a great historical tradition." Commentary

The 14th century gives us back two contradictory images: a glittering time of crusades and castles, cathedrals and chivalry, and a dark time of ferocity and spiritual agony, a world plunged into a chaos of war, fear and the Plague. Barbara Tuchman anatomizes the century, revealing both the great rhythms of history and the grain and texture of domestic life as it was lived.

In this sweeping historical narrative, Barbara Tuchman writes of the cataclysmic 14th century, when the energies of medieval Europe were devoted to fighting internecine wars and warding off the plague. Some medieval thinkers viewed these disasters as divine punishment for mortal wrongs; others, more practically, viewed them as opportunities to accumulate wealth and power. One of the latter, whose life informs much of Tuchman's book, was the French nobleman Enguerrand de Coucy, who enjoyed the opulence and elegance of the courtly tradition while ruthlessly exploiting the peasants under his thrall. Tuchman looks into such events as the Hundred Years War, the collapse of the medieval church, and the rise of various heresies, pogroms, and other events that caused medieval Europeans to wonder what they had done to deserve such horrors.

Anyone who has read THE GUNS OF AUGUST or STILWELL AND THE AMERICAN EXPERIENCE IN CHINA, knows that Barbara Tuchman was one of the most gifted American writers of this century. Her subject was history, but her profiles of great men and great events are drawn with such power that reading Tuchman becomes a riveting experience

In A DISTANT MIRROR, Barbara Tuchman illuminates the Dark Ages. Her description of medieval daily life, the role of the church, the influence of the Great Plagues, and the social and political conventions that make this period of history so engrossing, are carefully woven into an integrated narrative that sweeps the reader along.

I am a particular devotee of medieval and pre Renaissance music, so Barbara Tuchman's brilliant analysis of this period has special meaning for me - and I hope for many others.