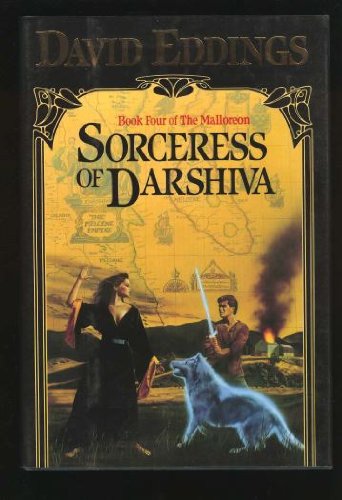 Troubles and delays continued to mount as Garion, Belgarath, Polgara, and the company pursued Zandramas across the known world. Possessed by the Dark Destiny, she had stolen Garion's infant son to use in a ritual that would destroy all that was fair and good.

Always the quest led onward, across and beyond the continent of Mallorea, where the Evil God Torak had once been supreme until Garion slew him. And always Zandramas was one step ahead of them. The armies she had raised, led by a Demon Lord, threatened to cut them off on one side: on the other, the forces of the Emperor Zakath were seeking to capture them.

Zandramas was taunting them and spying on them, flying over in the form of the great dragon, while the Dark Destiny changed her and etched away the last of her touches of humanity.

Somehow, as the Seeress of Kell had warned them, they had to be at the Place Which Is No More for the ritual at the same time as Zandramas, if they were to have a chance to defeat her evil schemes.

But where that might be they still had no clue.

About the Author:
David Eddings (1931-2009) published his first novel, High Hunt, in 1973, before turning to the field of fantasy with The Belgariad, soon followed by The Malloreon. Born in Spokane, Washington, and raised in the Puget Sound area north of Seattle, he received his Bachelor of Arts degree from Reed College in Portland, Oregon, in 1954, and a master of arts degree from the University of Washington in 1961. He served in the US Army, worked as a buyer for the Boeing Company, and was both a grocery clerk and a college English teacher. He lived in Nevada until his death, at the age of 77.
From Publishers Weekly:
In the battle between good and evil in the land of Mallorea begun in Guardians of the West , the wizard and shape-changer Belgarion continues his quest with 10 companions. They include his wife, Queen Ce'Nedra, his grandfather, Belgarath, and other members of his shape-changing wizard family, and the wily merchant Prince Kheldar, also known as Silk. The sorceress Zandramas, now Child of the Dark after the death of the god Torak at the hands of Belgarion (who is the Child of the Light) has stolen Belgarion's young son to use in a ritual prophesied to assure the dominance of the forces of the Dark. They find an original copy of the Ashabine Oracles, written long before Belgarion's birth, which contains a message to him from Torak that directs them to the ancient city of Kell. As they race other interested parties across battle-blasted landscapes, the group encounters warring troops of men and demons, and the Emperor of Mallorea, who joins the party on the orders of a blind seeress. Eddings depicts a complex, believable and colorful society filled with nobles, rogues and common people, the latter characters ringing particularly true, as does the world of the wolves into which Belgarion and his relatives change.
Copyright 1989 Reed Business Information, Inc.

Book Description Hardcover. Condition: New. Dust Jacket Condition: Near Fine. 1st Edition. FIRST EDITION/FIRST PRINTING with a complete number line beginning in 1. NEW & UNREAD - DUST JACKET HAS A TOUCH OF SHELF WEAR - - Hardcover in Dust Jacket as issued. DUST JACKET IN PROTECTIVE BRODART COVER - A VERY COLLECTIBLE COPY OF THIS BOOK - PHOTOS OF THE ACTUAL BOOK SENT UPON REQUEST. THIS IS AN INTRODUCTORY PRICE FOR OUR GRAND RE-OPENING. ALL PRICES WILL BE ADJUSTED IN LATER TO REFLECT MARKET PRICES. ALL BOOKS HAVE BEEN BOXED IN CLIMATE CONTROLLED STORAGE AND HAVE NOT BEEN TOUCHED BY ANY OTHER HUMAN THAN ME FOR AT LEAST THE LAST 10 YEARS - ALL BOOKS ARE SEALED AND BUBBLE WRAPPED AND SHIPPED IN BOXES - YOU CAN BUY HERE WITH CONFIDENCE KNOWING THAT A BUNCH OF STRANGERS HAVE NOT HANDLED YOUR BOOK -. Seller Inventory # 007357