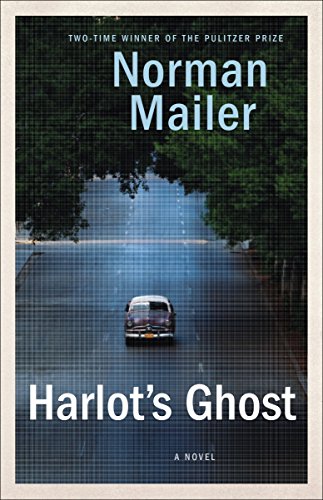 With unprecedented scope and consummate skill, Norman Mailer unfolds a rich and riveting epic of an American spy. Harry Hubbard is the son and godson of CIA legends. His journey to learn the secrets of his society—and his own past—takes him through the Bay of Pigs, the Cuban Missile Crisis, and the “momentous catastrophe” of the Kennedy assassination. All the while, Hubbard is haunted by women who were loved by both his godfather and President Kennedy. Featuring a tapestry of unforgettable characters both real and imagined, Harlot’s Ghost is a panoramic achievement in the tradition of Tolstoy, Melville, and Balzac, a triumph of Mailer’s literary prowess.

“[Norman Mailer is] the right man to exalt the history of the CIA into something better than history.”—Anthony Burgess, The Washington Post Book World

“Elegantly written and filled with almost electric tension . . . When I returned from the world of Harlot’s Ghost to the present I wished to be enveloped again by Mailer’s imagination.”—Robert Wilson, USA Today

“Immense, fascinating, and in large part brilliant.”—Salman Rushdie, The Independent on Sunday

“A towering creation . . . a fiction as real and as possible as actual history.”—The New York Times

“[Norman Mailer] loomed over American letters longer and larger than any other writer of his generation.”—The New York Times

“A writer of the greatest and most reckless talent.”—The New Yorker

“Mailer is fierce, courageous, and reckless and nearly everything he writes has sections of headlong brilliance.”—The New York Review of Books

“The largest mind and imagination [in modern] American literature . . . Unlike just about every American writer since Henry James, Mailer has managed to grow and become richer in wisdom with each new book.”—Chicago Tribune

“Mailer is a master of his craft. His language carries you through the story like a leaf on a stream.”—The Cincinnati Post

"The most daring, ambitious and by far the best written of the several very long, daring and ambitious books Norman Mailer has so far produced....Unlike just about every American writer since Henry James, Mailer has managed to grow and become richer in wisdom with each new book....There can no longer be any doubt that he possesses the largest mind and imagination at work in American literature today."
CHICAGO TRIBUNE
Narrated by Harry Hubbard, a second-generation CIA man, HARLOT'S GHOST looks into the depths of the American soul and the soul of Hugh Tremont Montague, code name Harlot, a CIA man obsessed. And Harry is about to discover how far the madness will go and what it means to the Agency and the country....
A Main Selection of the Book-of-the-Month Club

Born in 1923 in Long Branch, New Jersey, and raised in Brooklyn, New York, Norman Mailer was one of the most influential writers of the second half of the twentieth century and a leading public intellectual for nearly sixty years. He is the author of more than thirty books. The Castle in the Forest, his last novel, was his eleventh New York Times bestseller. His first novel, The Naked and the Dead, has never gone out of print. His 1968 nonfiction narrative, The Armies of the Night, won the Pulitzer Prize and the National Book Award. He won a second Pulitzer for The Executioner’s Song and is the only person to have won Pulitzers in both fiction and nonfiction. Five of his books were nominated for National Book Awards, and he won a lifetime achievement award from the National Book Foundation in 2005. Mr. Mailer died in 2007 in New York City.