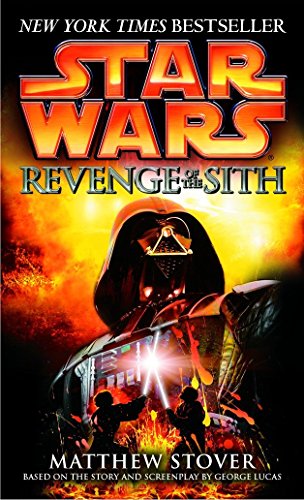 The turning point for the entire Star Wars saga is at hand. . . .

As combat escalates across the galaxy, the stage is set for an explosive endgame: Obi-Wan undertakes a perilous mission to destroy the dreaded Separatist military leader, General Grievous. Supreme Chancellor Palpatine continues to strip away constitutional liberties in the name of security while influencing public opinion to turn against the Jedi. And a conflicted Anakin fears that his secret love, Senator Padmé Amidala, will die. Tormented by unspeakable visions, Anakin edges closer to the brink of a galaxy-shaping decision. It remains only for Darth Sidious to strike the final staggering blow against the Republic–and to ordain a fearsome new Sith Lord: Darth Vader.

Based on the screenplay of the final film in George Lucas’s epic saga, bestselling Star Wars author Matthew Stover’s novel crackles with action, captures the iconic characters in all their complexity, and brings a space opera masterpiece full circle in stunning style.

About the Author:
Matthew Stover is the New York Times bestselling author of five previous novels, including Star Wars: Shatterpoint; Star Wars: The New Jedi Order: Traitor; Heroes Die; and The Blade of Tyshalle. He is an expert in several martial arts. Stover lives outside Chicago.
Excerpt. © Reprinted by permission. All rights reserved.:
Revenge of the Sith Novel Excerpt

It is already over. Nothing can be done to change it.

It is a story of love and loss, brotherhood and betrayal, courage and sacrifice and the death of dreams. It is a story of the blurred line between our best and our worst.

It is the story of the end of an age.

A strange thing about stories --

Though this all happened so long ago and so far away that words cannot describe the time or the distance, it is also happening right now. Right here.

It is happening as you read these words.

This is how twenty-five millennia come to a close. Corruption and treachery have crushed a thousand years of peace. This is not just the end of a republic; night is falling on civilization itself.

This is the twilight of the Jedi.

INTRODUCTION: The Age of Heroes

The skies of Coruscant blaze with war.

The artificial daylight spread by the capital's orbital mirrors is sliced by intersecting flames of ion drives and punctuated by starburst explosions; contrails of debris raining into the atmosphere become tangled ribbons of cloud. The nightside sky is an infinite lattice of shining hairlines that interlock planetoids and track erratic spirals of glowing gnats. Beings watching from rooftops of Coruscant's endless cityscape can find it beautiful.

From the inside, it's different.

The gnats are drive-glows of starfighters. The shining hairlines are light-scatter from turbolaser bolts powerful enough to vaporize a small town. The planetoids are capital ships.

The battle from the inside is a storm of confusion and panic, of galvened particle beams flashing past your starfighter so close that your cockpit rings like a broken annunciator, of the bootsole shock of concussion missiles that blast into your cruiser, killing beings you have trained with and eaten with and played and laughed and bickered with. From the inside, the battle is desperation and terror and the stomach-churning certainty that the whole galaxy is trying to kill you.

A strike at the very heart of the Republic?
An invasion of Coruscant itself?
How can this happen?
It's a nightmare, and no one can wake up.

Live via HoloNet, beings watch the Separatist droid army flood the government district. The coverage is filled with images of overmatched clone troopers cut down by remorselessly powerful destroyer droids in the halls of the Galactic Senate itself.

A gasp of relief: the troopers seem to beat back the attack. There are hugs and even some quiet cheers in living rooms across the galaxy as the Separatist forces retreat to their landers and streak for orbit --

We won! beings tell each other. We held them off!

But then new reports trickle in -- only rumors at first -- that the attack wasn't an invasion at all. That the Separatists weren't trying to take the planet. That this was a lightning raid on the Senate itself.

The nightmare gets worse: the Supreme Chancellor is missing.

Palpatine of Naboo, the most admired man in the galaxy, whose unmatched political skills have held the Republic together. Whose personal integrity and courage prove that the Separatist propaganda of corruption in the Senate is nothing but lies. Whose charismatic leadership gives the whole Republic the will to fight on.

Palpatine is more than respected. He is loved.

Even the rumor of his disappearance strikes a dagger to the heart of every friend of the Republic. Every one of them knows it in her heart, in his gut, in its very bones --

Without Palpatine, the Republic will fall.

And now confirmation comes through, and the news is worse than anyone could have imagined. Supreme Chancellor Palpatine has been captured by the Separatists -- and not just the Separatists.

He's in the hands of General Grievous.

Grievous is not like other leaders of the Separatists. Nute Gunray is treacherous and venal, but he's Neimoidian: venality and treachery are expected, and in the Viceroy of the Trade Federation they're even virtues. Poggle the Lesser is Archduke of the weapon masters of Geonosis, where the war began: he is analytical and pitiless, but also pragmatic. Reasonable. The political heart of the Separatist Confederacy, Count Dooku, is known for his integrity, his principled stand against what he sees as corruption in the Senate. Though they believe he's wrong, many respect him for the courage of his mistaken convictions.

These are hard beings. Dangerous beings. Ruthless and aggressive.

Grievous is a monster.

The Separatist Supreme Commander is an abomination of nature, a fusion of flesh and droid -- and his droid parts have more compassion than what remains of his alien flesh. This halfliving creature is a slaughterer of billions. Whole planets have burned at his command. He is the evil genius of the Confederacy. The architect of their victories.

The author of their atrocities.

And his durasteel grip has closed upon Palpatine. He confirms the capture personally in a wideband transmission from his command cruiser in the midst of the orbital battle. Beings across the galaxy watch, and shudder, and pray that they might wake up from this awful dream.

Because they know that what they're watching, live on the HoloNet, is the death of the Republic.

Many among these beings break into tears; many more reach out to comfort their husbands or wives, their crčche-mates or kin-triads, and their younglings of all descriptions, from children to cubs to spawn-fry.

But here is a strange thing: few of the younglings need comfort. It is instead the younglings who offer comfort to their elders. Across the Republic--in words or pheromones, in magnetic pulses, tentacle-braids, or mental telepathy -- the message from the younglings is the same: Don't worry. It'll be all right.

Anakin and Obi-Wan will be there any minute.

They say this as though these names can conjure miracles.

Anakin and Obi-Wan. Kenobi and Skywalker. From the beginning of the Clone Wars, the phrase Kenobi and Skywalker has become a single word. They are everywhere. HoloNet features of their operations against the Separatist enemy have made them the most famous Jedi in the galaxy.

Younglings across the galaxy know their names, know everything about them, follow their exploits as though they are sports heroes instead of warriors in a desperate battle to save civilization. Even grown-ups are not immune; it's not uncommon for an exasperated parent to ask, when faced with offspring who have just tried to pull off one of the spectacularly dangerous bits of foolishness that are the stock-in-trade of high-spirited younglings everywhere, So which were you supposed to be, Kenobi or Skywalker?

Kenobi would rather talk than fight, but when there is fighting to be done, few can match him. Skywalker is the master of audacity; his intensity, boldness, and sheer jaw-dropping luck are the perfect complement to Kenobi's deliberate, balanced steadiness. Together, they are a Jedi hammer that has crushed Separatist infestations on scores of worlds.

All the younglings watching the battle in Coruscant's sky know it: when Anakin and Obi-Wan get there, those dirty Seppers are going to wish they'd stayed in bed today.

The adults know better, of course. That's part of what being a grown-up is: understanding that heroes are created by the HoloNet, and that the real-life Kenobi and Skywalker are only human beings, after all.

Even if they really are everything the legends say they are, who's to say they'll show up in time? Who knows where they are right now? They might be trapped on some Separatist backwater. They might be captured, or wounded. Even dead.

Some of the adults even whisper to themselves, They might have fallen.

Because the stories are out there. Not on the HoloNet, of course -- the HoloNet news is under the control of the Office of the Supreme Chancellor, and not even Palpatine's renowned candor would allow tales like these to be told--but people hear whispers. Whispers of names that the Jedi would like to pretend never existed.

Sora Bulq. Depa Billaba. Jedi who have fallen to the dark. Who have joined the Separatists, or worse: who have massacred civilians, or even murdered their comrades. The adults have a sickening suspicion that Jedi cannot be trusted. Not anymore. That even the greatest of them can suddenly just . . . snap.

The adults know that legendary heroes are merely legends, and not heroes at all.

And so it is that these adults across the galaxy watch the HoloNet with ashes where their hearts should be.

Two is enough because the adults are wrong, and their younglings are right.

Though this is the end of the age of heroes, it has saved its best for last.

Star Wars Revenge Of The Sith

Revenge of the Sith (Paperback or Softback)

Book Description Paperback. Condition: New. Reprint. Language: English. Brand new Book. The turning point for the entire Star Wars saga is at hand. . . .As combat escalates across the galaxy, the stage is set for an explosive endgame: Obi-Wan undertakes a perilous mission to destroy the dreaded Separatist military leader, General Grievous. Supreme Chancellor Palpatine continues to strip away constitutional liberties in the name of security while influencing public opinion to turn against the Jedi. And a conflicted Anakin fears that his secret love, Senator Padmé Amidala, will die. Tormented by unspeakable visions, Anakin edges closer to the brink of a galaxy-shaping decision. It remains only for Darth Sidious to strike the final staggering blow against the Republic-and to ordain a fearsome new Sith Lord: Darth Vader. Based on the screenplay of the final film in George Lucas's epic saga, bestselling Star Wars author Matthew Stover's novel crackles with action, captures the iconic characters in all their complexity, and brings a space opera masterpiece full circle in stunning style. Seller Inventory # ABZ9780345428844