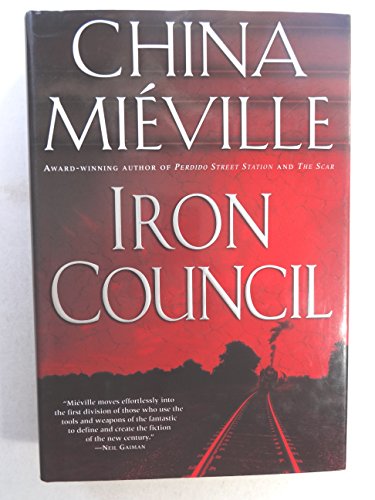 Following Perdido Street Station and The Scar, acclaimed author China Miéville returns with his hugely anticipated Del Rey hardcover debut. With a fresh and fantastical band of characters, he carries us back to the decadent squalor of New Crobuzon—this time, decades later.

It is a time of wars and revolutions, conflict and intrigue. New Crobuzon is being ripped apart from without and within. War with the shadowy city-state of Tesh and rioting on the streets at home are pushing the teeming city to the brink. A mysterious masked figure spurs strange rebellion, while treachery and violence incubate in unexpected places.
In desperation, a small group of renegades escapes from the city and crosses strange and alien continents in the search for a lost hope.
In the blood and violence of New Crobuzon’s most dangerous hour, there are whispers. It is the time of the iron council. . . .

The bold originality that broke Miéville out as a new force of the genre is here once more in Iron Council: the voluminous, lyrical novel that is destined to seal his reputation as perhaps the edgiest mythmaker of the day.

China Miéville's novel Iron Council is the tumultuous story of the "Perpetual Train." Born from monopolists' greed and dispatched to tame the western lands beyond New Crobuzon, the train is itself the beginnings of an Iron Council formed in the fire of frontier revolt against the railroad's masters. From the wilderness, the legend of Iron Council becomes the spark uniting the oppressed and brings barricades to the streets of faraway New Crobuzon. The sprawling tale is told through the past-and-present eyes of three characters. The first is Cutter, a heartsick subversive who follows his lover, the messianic Judah Low, on a quest to return to the Iron Council hidden in the western wilds. The second is Judah himself, an erstwhile railroad scout who has become the iconic golem-wielding hero of Iron Council's uprising at the end of the tracks. And the third is Ori, a young revolutionary on the streets of New Crobuzon, whose anger leads him into a militant wing of the underground, plotting anarchy and mayhem.

Miéville (The Scar, Perdido Street Station) weaves his epic out of familiar and heavily political themes--imperialism, fascism, conquest, and Marxism--all seen through a darkly cast funhouse mirror wherein even language is distorted and made beautifully grotesque. Improbably evoking Jack London and Victor Hugo, Iron Council is a twisted frontier fable cleverly combined with a powerful parable of Marxist revolution that continues Miéville's macabre remaking of the fantasy genre. --Jeremy Pugh