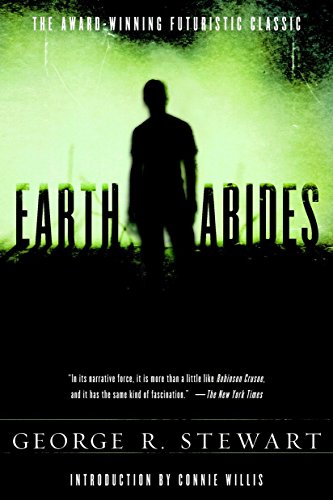 An instant classic upon its original publication in 1949 and winner of the first International Fantasy Award, Earth Abides ranks with On the Beach and Riddley Walker as one of our most provocative and finely wrought post-apocalyptic works of literature. Its impact is still fresh, its lessons timeless.

With an introduction by Connie Willis

When a plague of unprecedented virulence sweeps the globe, the human race is all but wiped out. In the aftermath, as the great machine of civilization slowly and inexorably breaks down, only a few shattered survivors remain to struggle against the slide into barbarism . . . or extinction.

This is the story of one such survivor, Isherwood “Ish” Williams, an intellectual loner who embraces the grim duty of bearing witness to what may be humanity’s final days. But then he finds Em, a wise and courageous woman who coaxes his stunned heart back to life and teaches him to hope again. Together, they will face unimaginable challenges as they sow the seeds of a new beginning.

“One of the finest of all post-holocaust novels.”—The Encyclopedia of Science Fiction

“The book has more thought-challenging elements than a shelf full of ordinary novels.”—The Christian Science Monitor

A disease of unparalleled destructive force has sprung up almost simultaneously in every corner of the globe, all but destroying the human race. One survivor, strangely immune to the effects of the epidemic, ventures forward to experience a world without man. What he ultimately discovers will prove far more astonishing than anything he'd either dreaded or hoped for.

George Rippey Stewart (May 31, 1895 – August 22, 1980) was an American toponymist, a novelist, and a professor of English at the University of California, Berkeley. He is best known for his only science fiction novel Earth Abides (1949), a post-apocalyptic novel, for which he won the first International Fantasy Award in 1951. It was dramatized on radio's Escape and inspired Stephen King's The Stand.