Items related to The Scramble for Africa

Pakenham, Thomas The Scramble for Africa 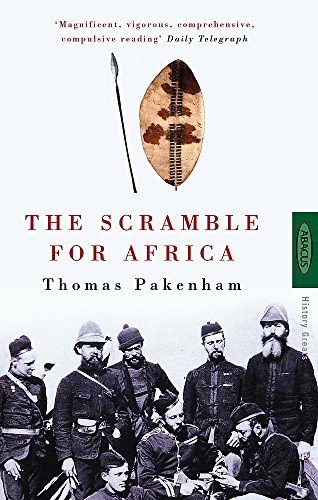 In 1880 the continent of Africa was largely unexplored by Europeans. Less than thirty years later, only Liberia and Ethiopia remained unconquered by them. The rest - 10 million square miles with 110 million bewildered new subjects - had been carved up by five European powers (and one extraordinary individual) in the name of Commerce, Christianity, 'Civilization' and Conquest. The Scramble for Africa is the first full-scale study of that extraordinary episode in history.

Thomas Pakenham is the author of THE MOUNTAINS OF RASSELAS, THE YEAR OF LIBERTY and THE BOER WAR. He divides his time between a terraced house I nnNorth Kensington, London and a crumbling castle in Ireland. He is married to the writer Valerie Pakenham and they have four children.

'The current is with us.'

Leopold II, King of the Belgians, at the Geographical
Conference in Brussels, 12 September 1876

'He [King Leopold) first explained his views to me
when I was his guest in Brussels some years ago . . .
his designs are most philanthropic and are amongst
the few schemes of the kind . . . free from any selfish
commercial or political object.'
-- Sir Bartle Frere, 1883


The Times was delivered at the palace of Laeken on 7 January 1876, as usual, in time for His Majesty's breakfast. Leopold II had been up since five. Normally he took a walk through the palace gardens, a tall bearded figure, tramping along the gravelled paths with a barely noticeable limp, or, if it was wet, inspecting the hothouses. He read The Times each day. It was the early edition, the one that caught the night mails to the Continent. His own copy was packed in a special cylindrical container, hurried by the South-Eastern Railway from Blackfriars to Dover, then by the steam ferry to Ostend, then thrown from the guard's van as the Brussels express clanged past the royal palace at Laeken where a footman was waiting to retrieve it. Leopold read the paper with the same earnestness he displayed when performing other royal tasks, brushing the front of his blue tunic with his right hand when something caught his eye.

That morning, 7 January, tucked away at the bottom of page six, was a brief note from The Times's correspondent in Loanda, capital of the half-derelict Portuguese colony of Angola, dated nearly seven weeks earlier. Lieutenant Cameron, the British explorer, had reached the west coast after a three-year journey across Africa. He was too ill (half-dead from scurvy) to return to England before the spring. Meanwhile, he was sending some notes from his travels to be read at a meeting of the Royal Geographical Society on Monday next.

Four days later, under the heading 'African Exploration', The Times splashed Monday's meeting of the RGS across the first three columns of the home news page. The President, Sir Henry Rawlinson, called Cameron's journey 'one ofthe most arduous and successful journeys which have ever been performed intothe interior of the African continent'. That seemed no exaggeration to thosewho read Cameron's own letters, given to the public at the meeting. Of courseCameron was the first to point out there might be 'diplomatic difficulties' ahead, although no European power yet claimed the land either as a colony or a protectorate. This was because of the huge wealth at stake.


The interior is mostly a magnificent and healthy country of unspeakable richness. I have a small specimen of good coal; other minerals such as gold, copper, iron and silver are abundant, and I am confident that with a wise and liberal (not lavish) expenditure of capital, one of the greatest systems of inland navigation in the world might be utilized, and from 30 months to 36 months begin to repay any enterprising capitalist that might take the matter in hand . . . 1


A country of 'unspeakable richness' waiting for an 'enterprising capitalist'. What were Leopold's own views about young Cameron and his sensational discoveries? Cameron's story certainly caught his eye. Within a few days he had promised the RGS that he would pay, if needed, the princely sum of I00,000 francs (Ł4000) to cover the expenses Cameron had incurred on the journey.

In public, however, Leopold showed no flicker of interest. In the Senate he would stand like a Roman emperor, tall, bearded, his nose like the prow of a trireme. In his slow booming voice, he spoke the required generalities. He had learnt the craft of monarchy in a hard school. His father, Leopold I, was the son of an impoverished German princeling, the Duke of Saxe-Coburg-Gotha. He had had his eye on the good solid throne of England where he would have been consort, through his marriage to Princess Charlotte, George IV's heir presumptive. Charlotte had died in childbirth in 1817. In 1831 Leopold I had picked up a throne in Belgium--but a throne perched on a tightrope. Inside Belgium were two warring peoples, Flemish and Walloon, and two warring sects, Liberals and Catholics. Outside Belgium, hemming it in, were two warring Powers, France and Germany. The King of the Belgians was thus doubly vulnerable. His own survival depended on the goodwill of a bitterly divided people. Belgium's survival depended on the goodwill of two greedy neighbours. To preserve both throne and nation, the King must remain aloof from controversy. Aloofness seemed to come naturally to Leopold II. He seemed to have a natural coolness of heart--or at any rate a temperament chilled by the rebuffs of fortune. His father, Queen Victoria's 'dearest uncle', had shown scant affection for any of his three children. He found Leo gauche and self-willed. Leopold's gentle mother Louise, daughter of Louis-Philippe of France, was devoted to her children, though it was clear Leopold was not her favourite. She had died when Leopold was twelve. And his own son, on whom he doted, died tragically young, leaving Leopold without a direct male heir. At the funeral the King had, for once, lost control. To the alarm of onlookers, he broke down and sobbed aloud by the coffin.

Still, since his accession in 1865, he had hardly put a foot wrong in public. If he was known at all in the world outside Belgium it was as a model, if somewhat pedestrian, ruler. He was admirably free from those delusions of grandeur that so often seemed to fill the crowned heads of petty states.

To his own staff and the handful of politicians who dealt with him regularly, Leopold presented a more complicated character . . .

The Scramble For Africa (Paperback)

Book Description Paperback. Condition: New. Repr. Language: English. Brand new Book. In 1880 the continent of Africa was largely unexplored by Europeans. Less than thirty years later, only Liberia and Ethiopia remained unconquered by them. The rest - 10 million square miles with 110 million bewildered new subjects - had been carved up by five European powers (and one extraordinary individual) in the name of Commerce, Christianity, 'Civilization' and Conquest. The Scramble for Africa is the first full-scale study of that extraordinary episode in history. Seller Inventory # HUK9780349104492

The Scramble For Africa

Shipping: US$ 14.45
From United Kingdom to U.S.A.
Destination, rates & speeds

The Scramble For Africa (Paperback)

Book Description Paperback. Condition: new. Paperback. The scramble for Africa astonished everyone. In 1880 most of the continent was still ruled by Africans and barely explored. By 1902, five European Powers had grabbed almost the whole continent, giving themselves 30 new colonies and protectorates and 10 million square miles of land. The inspiration came from the heroic death in 1873 of the missionary-explorer, David Linvingstone. He had exposed the horrors of the slave trade still in progress. His call for Africa to be redeemed by the three "C"s - commerce, Christianity and civilisation - was aimed at the conscience of the civilized world. The response came from rival colonial enthusiasts in Europe. There were journalist-explorers like Henry Stanley, sailor-explorers like Pierre de Brazza (who gave his name to Brazzaville and its beach) and gold and diamond tycoons like Cecil Rhodes. As the race gathered momentum, a fourth "C" - Conquest - became dominant. The Maxim gun, not trade or the cross, became the symbol of the age. In many colonies atrocities were commonplace. This is the history of this episode. The author also wrote "The Boer War". This book is the winner of the W.H. Smith Literary Award. The extraordinary race for African territory that began in the 1880's and swept the political masters of Europe off their feet. Shipping may be from multiple locations in the US or from the UK, depending on stock availability. Seller Inventory # 9780349104492

Shipping: US$ 12.03
From United Kingdom to U.S.A.
Destination, rates & speeds

The Scramble For Africa

Shipping: US$ 11.98
From United Kingdom to U.S.A.
Destination, rates & speeds

Shipping: US$ 10.83
From United Kingdom to U.S.A.
Destination, rates & speeds