Items related to Golf in the Kingdom (Abacus Books)

Golf in the Kingdom (Abacus Books) 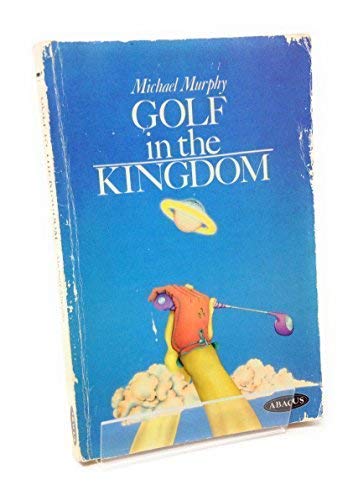 Since its first publication, Golf in the Kingdom has been recognized as a classic work on the deeper mysteries of golf—a gospel of those who suspect, or know, that golf is more than a mere pastime.A young man en route to India stops in Scotland to play at the legendary Burningbush golf club and in twenty-four hours, his life is transformed. Paired with a mysterious teacher named Shivas Irons, he is led through a round of phenomenal golf, swept into a world where extraordinary powers are unleashed in a a backswing governed by true gravity. A night of adventure and revelation follow, and lead to a glimpse of Seamus MacDuff, the holy man who haunts a ravine off Burningbush's thirteenth fairway—one they call Lucifer's Rug.Murphy's account reveals the possibilities for transcendence that resides in the human soul, and through mystic-philosopher Shivas Irons, the reader, like Murphy, becomes drawn into new worlds by this ancient and haunting game.

Esalen Institute founder Michael Murphy's divine meditation on the royal and ancient game defied categorization when it was first published in 1972, and it still does. Instantly hailed as a classic, Golf in the Kingdom is an altogether unique confluence of fiction, philosophy, myth, mysticism, enchantment, and golf instruction. The central character is a wily Scotsman named Shivas Irons, a golf professional by vocation and a shaman by design, whom Murphy, as participant in his own novel, meets in 1956 on the links of Burningbush, in Fife. The story of their round of golf together culminates in a wild night of whiskey and wisdom where, as Shivas demonstrates how the swing reflects the soul, their golf quite literally takes on a metaphysical glow. The events alter not only Murphy's game, but they also radically alter his mind and inner vision; it's truly unforgettable. For a golfer, Murphy's masterpiece is as essential as a set of clubs.

A classic tale of sport and mysticism, here in a brand new audio production.

"Michael Murphy was on his way from California to India when he met Shivas Irons on a golfing links he calls Burningbush, in Scotland. They played 18 holes together and had a second go at the devilish 13th hole in the middle of a wild whiskey night--a mythic round that profoundly altered Murphy's game and his vision. . . Murphy's book is going to alter many visions. He's written a mystical tale capable of winning a constituency. I totally believed it and loved it."
--Nancy Weber, The New York Times Book Review

"Golf in the Kingdom is a fascination...[Murphy has] put a lot of fine thoughts together here, most gracefully, and the book should have a long and prosperous life."
--Joseph Campbell

"Golf a mere game? A mirror of life? Something metaphysical and/or mystical? All of the above? Shivas Irons, a magical Scottish golf professional, puts those questions to all of us. Superb."
--C. Grant Spaeth, President, United States Golf Association

1. Golf in the Kingdom

Book Description Sphere, 1976. Paperback. Condition: Good. Paperback in average to good condition. Cover has some creasing and pages yellowed. Michael Murphy was on his way from California to Inda when he met Shivas Irons on a golfing links he calls Burningbush, in Scotland. They played 18 holes together and had a second go at the devilish 13th hols in the middle of a wild whisky night 0 a mythic round that profoundly altered Murphy's game and his vision. Murphy's book is going to alter many visions. he's written a mystical tale . I totally believed and loved it. The new York Times Book Review. Seller Inventory # 21826

2. Golf in the Kingdom (Abacus Books)

3. Golf in the Kingdom (Abacus Books)

Book Description Sphere, 1976. Paperback. Condition: Very Good. Very Good unused condition. This book is in stock now, in our UK premises. Photos of most of our books are available - please ask, as dustjacket and cover illustrations vary, and unless the accompanying image is marked 'Bookseller Image', it is an Abebooks Stock Image, NOT our own. Overseas buyers also note that shipping rates apply to packets of 750g and under, and should the packed weight of an item exceed this we reserve the right to ship via 'Economy', or request extra postage prior to fulfilling the order, or cancel. Seller Inventory # mon0000103001

4. GOLF IN THE KINGDOM

5. Golf in the Kingdom