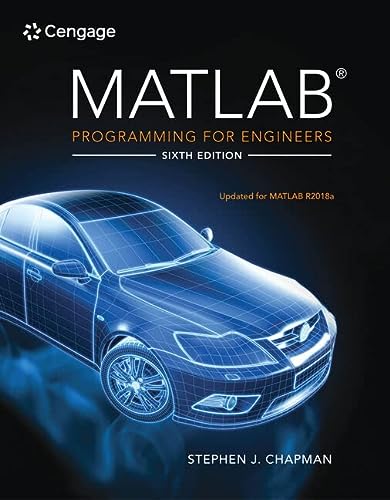 Master today's MATLAB technical programming language while strengthening problem-solving skills with the help of Chapman's successful MATLAB PROGRAMMING FOR ENGINEERS, 6th Edition. You learn how to write clean, efficient and well-documented programs as you simultaneously gain an understanding of the many practical functions of MATLAB. You study the latest version of MATLAB R2018a and work with new MATLAB GUI (Graphical User Interface) Apps. The first nine chapters provide a basic introduction to programming and problem solving, while the remaining chapters address more advanced topics, such as I/O, object-oriented programming, and Graphical User Interfaces. With this comprehensive coverage, MATLAB PROGRAMMING FOR ENGINEERS, 6th Edition serves as a trusted reference tool throughout your studies and into your professional career as you work with MATLAB.

Stephen J. Chapman received a B.S. in Electrical Engineering from Louisiana State University and an M.S.E. in Electrical Engineering from the University of Central Florida. He pursued further graduate studies at Rice University. Mr. Chapman has served as an officer in the U.S. Navy, assigned to teach Electrical Engineering at the U.S. Naval Nuclear Power School in Orlando, Florida. He was also affiliated with the University of Houston, where he ran the power systems program in the College of Technology. In addition, he has served as a member of the technical staff of the Massachusetts Institute of Technology's Lincoln Laboratory, both at the main facility in Lexington, Massachusetts, and at the field site on Kwajalein Atoll in the Republic of the Marshall Islands. While there, he did research in radar signal processing systems. He ultimately became the leader of four large operational range instrumentation radars at the Kwajalein field site (TRADEX, ALTAIR, ALCOR, and MMW). Mr. Chapman also served as a research engineer at Shell Development Company in Houston, Texas, where he conducted seismic signal processing research. In addition, he was affiliated with the University of Houston, where he continued to teach on a part-time basis. Mr. Chapman is currently Manager of Systems Modeling and Operational Analysis for BAE Systems Australia in Melbourne, Australia. He is the subject matter expert of a team that has developed a model of how naval ships defend themselves. This model contains more than 400,000 lines of MATLAB code written over more than a decade. Mr. Chapman is a Senior Member of the Institute of Electrical and Electronic Engineers (and several of its component societies). He is also a member of the Institution of Engineers (Australia).

Book Description Condition: New. Brand new book. This is an international edition textbook with identical content as the US version. We ship all our orders from CA/IL, USA (depending on your address) and NOT from Asia! Buy with confidence from a 5-star US based seller. Choose expedited shipping for superfast delivery with tracking. Seller Inventory # 9780357030394

Book Description Condition: New. Brand New Original US Edition.We Ship to PO BOX Address also. EXPEDITED shipping option also available for faster delivery.This item may ship fro the US or other locations in India depending on your location and availability. Seller Inventory # AUDECC-102175