Items related to At Any Cost (Love Inspired Suspense)

At Any Cost (Love Inspired Suspense) 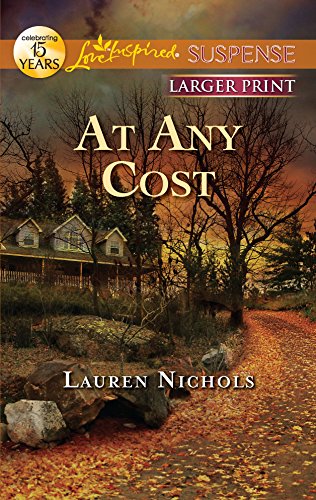 Hiding from the past, jumping at shadows... Welcome to Jenna Harper's life ever since her ex decided murder was the way to punish her for moving on. Yet Jenna survived—and continuous survival means eluding her attacker: no unnecessary risks, no credit cards and definitely no men. But despite her cautiousness, Jenna can't deny her attraction to Beau Travis, the rugged carpenter fixing up her B and B. Neither can she ignore the recent mishaps that could blow her cover. Are the two connected? A troublemaker in high school, Beau was never the dependable type. Is he a suitor or a suspect?

The answer could mean her life.

Once upon a time, Lauren Nichols wanted to to illustrate children's books. But when one publisher finally gave her a chance to submit her sketches--if she wrote an accompanying story--Lauren fell in love with fiction writing. She now writes mystery, romance and science fiction short stories for national magazines, and romantic suspense novels for Harlequin. Lauren loves creating emotional romances with mystery and suspense elements that keep readers guessing until the very end.

At 10:30 a.m., Beau Travis drove up the slight incline to the small blacktopped parking lot beside the Blackberry Hill Bed and Breakfast and parked his truck. Wind-whipped snow flurries rode the crisp morning air. He wasn't a fan of snow, but in Pennsylvania's Allegheny Mountains, from mid-October on, it was only a matter of time until it showed up—and it was November now. Leaving his jacket on the seat, he swung out of his charcoal-gray Ford F-250, slammed the door and grabbed his heavy toolbox from the truck's bed. Wind tunneled down the neck of his navy sweatshirt as he hurried up the walk to the sprawling gingerbread-trimmed, pink-shingled Victorian's white porch. He preferred to get an earlier start on his jobs, but Jenna didn't like having her late-sleeping guests rousted from their dreams by power tools.

As always—particularly for the past two weeks since he'd been working here—Beau felt an airy anticipation in his gut as he stamped the snow from his boots, rang the bell and waited for someone to buzz him inside. The door latch clicked, and he entered. No way was he in the market for a relationship. But he was a thirty-six-year-old red-blooded American man, and he still enjoyed looking at a beautiful woman. Jenna Harper was that and a whole lot more.

He closed the glossy oak door with the side lights and etched glass inset behind him, then paused in the foyer where the registration desk took center stage. The aroma of freshly baked pastries filled the air. Jenna was on the phone, and in the second it took before he noted the anxiety in her eyes, his mind absorbed everything about her. Everything from the pretty sun streaks in her shoulder-length ash-blond hair, to the soft pinkish-lavender sweater she wore with cream-colored wool pants. Her tone and the nervous way she fingered the gold cross at her scooped neckline spiked his awareness.

"No. No, the charges aren't mine," she said. "I haven't used that credit card in two years. Are you certain this wasn't an accident? Someone could have juxtaposed the numbers when they—" Her voice rose shakily. "I see. How many charges were there?"

Beau took his time wiping his boots on the mat. This was none of his business, but he hesitated just the same. Generally, he kept his nose to the grindstone and his eyes straight ahead—didn't get involved in other people's concerns and kept his own little dramas to himself. But she was different. She intrigued him—had since she'd been an underclassman at their high school. She was incredibly beautiful, but didn't date. She was friendly, yet there was a wariness about her that she couldn't hide. She shared bits of her life, but quickly changed the subject when his questions approached anything close to personal. And now that he thought about it, he rarely saw her out and about except for Sunday services at St. John's.

When she spoke again, her voice trembled. "There were flowers delivered to three different funeral homes?" She pressed her free hand to her stomach. "No. No, I don't have family members in those cities."

Nodding to her and receiving her tense nod in return, Beau followed the carpet runner past the formal parlor toward the dining room. Okay, she'd been the victim of identity theft. It was a growing crime, but most credit card companies didn't hold cardholders responsible for some hacker's criminal bent. But unless his radar was all messed up—or unless he was linking her reaction to her lifestyle—she was afraid. That made him afraid for her, and an unexpected jolt of protectiveness hit him squarely in the chest.

With a nod to Jenna's great-aunt Molly who was fussing with table settings beyond the dining room's French doors, Beau turned right, stepped through a doorway, and tried to focus on the sitting room he'd be restoring. He'd finished the bedroom upstairs. Today he needed to remove the molding and aging wallpaper in here, then size the walls. He scanned the room. The drapes were down, and snow blew past the long window that had been exposed. The sill would have to be replaced. He'd stored small pieces of furniture in the attic yesterday, then ripped up the carpeting and moved the larger furniture to the middle of the room. Jenna had draped them in plastic: two rose-colored camel-back settees, a highboy and a couple of small tables. He set his toolbox on the floor next to his Shop-Vac, then unable to shake his concern, glanced back through the doorway and the trouble he'd sensed at the front desk.

Tiny, feisty Molly Jennings strode inside, a pixie grin in place, her feathery cap cut as white as the flurries outside. "Late for breakfast again," she teased, shaking a bony finger. "What am I going to do with you?"

Beau chuckled. "I told you. I don't eat breakfast. I had a cup of coffee at the Quick Stop before I came over."

"A cup of coffee is no way for a big, strapping young man to start his day," she insisted, then linked her arm through his. "There are a few cranberry muffins left, and they'll just go to waste if you don't help me out." She continued before he could refuse again. "Besides, we still have an expectant mama upstairs who might like to sleep a little longer. She won't be able to do that once you start banging around in here."

Grinning, Beau let her drag him into the Victorian's dining room. Molly Jennings—who'd been "Aunt Molly" to him since she'd bailed him out of a mess during his teenage years—was singing the same song she sang every day when he walked in. Today he'd accept because he wanted to ask about Jenna. "Okay. I'll have a muffin if you do, too. Then I have to get to work."

Aunt Molly parked him at a table that was already set with cups, saucers and condiments, then scooted over to a courtesy table that held beverages for the Blackberry's guests, and grabbed a carafe. She plucked two muffins from the warming basket and put them on fancy china dishes.

Beau smiled, watching her add knives and pats of butter to the plates. She was still a pint-sized dynamo at eighty-something, and looked perfectly at home in a room outfitted with silk flowers, antique dolls and cream-and-roses wallpaper. As always, she wore period clothing and high-button shoes. Today's outfit was a floor-length dark green skirt and a high-necked, white blouse that puffed at the shoulder, then molded her matchstick arms down to the wrist. It was well known that from the time she'd opened the Blackberry Hill Bed and Breakfast fifty years ago, Molly Jennings had delighted in creating a slice of history for her guests. That hadn't changed after she'd sold the B and B to Jenna two years ago.

"Here you go." She handed him a plate, set hers down, then returned for the carafe. She carried it back to the table. "Now grab a chair and tell me what's on your mind."

With a curious tilt of his head, Beau pulled out her chair, waited for her to sit, then took the seat beside her. At six foot two, he was a giant sitting next to her four foot ten—a giant in a room too feminine and fussy for a man of his proportions. "Why do you think something's on my mind?"

"Because for the past two weeks, I've been trying to get you in here for breakfast, and until today, you've refused."

He grinned. "Maybe you just wore me down."

"And maybe I'm sweet sixteen and waiting for my prom date. Now, out with it."

He was trying to come up with a subtle way to ask why Jenna was so guarded about her past when she came inside. The agitated look in her wide blue eyes hadn't changed since that phone call.

"Good morning," she said, seeing him and quickly calling up a smile.

"I see Aunt Molly finally nagged you into accepting some breakfast."

Molly headed back to the china cabinet, her reply drifting airily. "I don't nag, dear, I simply suggest. Who was on the phone?"

Beau watched Jenna take an unsuccessful stab at nonchalance. "My credit card company. Apparently, someone has my account number, and they've been having a lot of fun at my expense. Literally."

There was no point in acting surprised. She knew he'd overheard part of her conversation. "I imagine the card company's investigating," he said.

"Yes. That's why they called. I guess when charges are made out of state on an account that's been dormant for two years, it raises a red flag."

There was a rattle of china as Molly fumbled with a cup and saucer, then smiling a little too brightly, she carried them to their table. "You cancelled the card, of course."

Jenna nodded soberly. "Yes, but I should've done it a long time ago. The woman who called said there could be charges that haven't posted yet, but they'll refuse payment. I'm not liable for them. As of now, my fraudulent friend's fun is over."

But Jenna was more upset than she should be, all things considered, and Molly seemed to be feeling a bit of that, too. Picking up his muffin, Beau wrapped it in a napkin and hid his concern behind a smile. It was time for him to leave. Jenna obviously needed to speak to her aunt alone. "That's good news. Glad things worked out." He nodded toward the open doors. "Now I need to get busy. You're not paying me to socialize."

Jenna hurried to put him at ease. "No, please stay and enjoy your breakfast. Don't let me chase you away."

"You're not," he said, forcing a chuckle. "The fear that I'll be pulled into a girl-talk session is." He shifted his attention to Aunt Molly. "I'll keep the noise down. Scout's honor. No power tools until noon."

But there was no feisty comeback from his tiny boss, only a smile and a nod—and his concern grew.

Jenna watched him go, then rose to close the French doo...