Items related to The One That Got Away

Sobrato, Jamie The One That Got Away

The One That Got Away 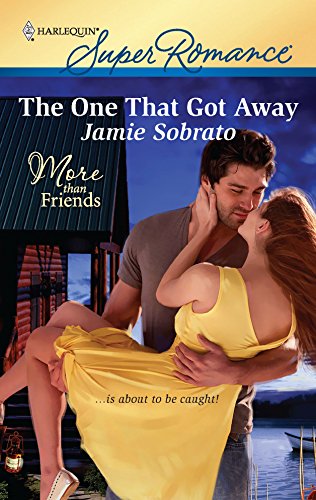 Good friends are hard to find. In fact, they're priceless. And it's only after almost losing her that Marcus Kastanos really appreciates his bud Ginger Townsend. She's even offered her house as a place for him to stay while he gets his life on track. Could he have a better friend?

Which makes the wild attraction he feels for her so inappropriate. It's true that she's become a stunning woman since college, but that's no reason to let his libido run amok. The longer he's in her home, the harder it is for him not to act on these urges. Just when he thinks he's got everything under control, Ginger drops a little confession that changes everything!

Marcus Kastanos sat on the set of the British news talk show London Daily, sweating a little under the glare of stage lights as hundreds of eyes from the studio audience stared at him.

He didn't consider promotion fun under the best of circumstances—and these were anything but ideal—but he knew his book was good. The story he'd told was an important one that people needed to hear, and for that reason, he'd do everything he could to make sure it got the exposure it deserved. The critical acclaim he'd received was nice, but it meant little if readers didn't know about the book and buy it.

Of course, the death threats were just about the best book promotion money couldn't buy.

If anyone had told him five years ago that he'd be living with a death sentence hanging over his head, he'd have laughed.

He still had trouble believing it.

But checking the street before he stepped outside, triple locking his doors, keeping his curtains drawn at night and traveling with a bodyguard had all become second nature for him the past year, ever since he'd first received the threats.

This wasn't his first time appearing on TV to talk about the political fallout from his novel, but today he felt more uneasy than he usually did, and he couldn't say why. He'd looked out his hotel room window that morning at the gray London sky and felt a bleak mood settle over him along with a more familiar restlessness. Probably the black mood and the edginess were inherited from his father.

The terrorist attacks in London in the past year only added to the anxiety that niggled constantly at the back of his mind.

But no matter. He was here, and he had his book to promote. Seven Grains of Sand had just come out in trade paperback a year after its hardcover release, and he wasn't going to cower in fear. The story had to be told.

"Today we're here with American expatriate author Marcus Kastanos, talking about his controversial novel Seven Grains of Sand, and the death threats issued against him as a result of the book's publication."

The host, a man named Liam Parkinson, paused as the live audience applauded. Then he turned to Marcus.

"Thank you for joining us, Marcus."

"As I read your book, I found myself wondering what led you to write a story about a Muslim woman struggling to shed her family's traditions. I'm guessing the book wasn't inspired by personal experience."

Marcus forced himself to grin at the question he'd already answered a million times. "In a sense, it was personal experience that led me to tell this story. I was involved in my twenties with a woman whose life wasn't unlike the heroine's in my novel. Her story always haunted me, and I've never been able to shake the anger I felt on her behalf when I listened to her describe what she'd gone through as a child growing up with the painful effects of female circumcision."

"Ah, yes. One of the more graphic parts of the novel—your description of that brutal procedure. Did you do any firsthand research?"

"Most of my research came from my former lover, who encouraged me to write the book, and medical and journalistic articles. I also had several people more familiar with the process than I am read the book for accuracy."

"And what about the now famous death threats? How has your life changed since you first received them?"

Another predictable question, but one Marcus couldn't really answer without putting himself in further danger.

"I'm a bit limited in where I go and what I do these days. I've also scratched all plans to travel to certain Middle Eastern or African countries."

Uneasy laughter from the audience.

"And how do you feel about—" The host's question was interrupted by the sounds of a scuffle in the audience and raised voices.

Marcus peered in that direction and caught the glint of light off metal. This couldn't be happening. Before he could react, the first shot exploded. Then another, and another.

Searing pain in his chest registered only after he was thrown backward against the chair.

In the uproar that followed, his sense of reality became a series of fractured images.

The overhead lights were too bright.

Hey. He was lying down? Why?

Shouting. People all around him were shouting. He had to get up. See what the noise was about.

His chest, wet and warm. And so painful.

Had he been shot?

He closed his eyes. Yeah. That was better. The noise and pain faded.

He was a kid. Playing. But where? Right. The commune. Oregon. That was chill, man.

No. Not Oregon. Amsterdam. High school. He was so mad. Just so pissed off at the world and his useless father. Didn't get out of bed for days. Depressed. Whatever.

Bed. Bed... Nice. All those hot girls. Berkeley. Good times. Classes. Lit. All those beautiful words. Pulling him in. Inspiring him...

Pounding out that stupid novel. Hours at the freaking computer. Hated it. Every painful second. But he had to do it... even if it hurt.

No. His chest hurt.

And why was it so cold? So freaking cold, and the lights...

He closed his eyes.

The woman's voice was unfamiliar. A British accent. A cool hand on his arm.

Marcus opened his eyes to see a nurse staring down at him. "Mr. Kastanos, can you hear me?"

He tried to say yes, but only a faint croak emerged from his throat. He struggled to work his head up and down in some semblance of a nod.

"Good. You're at Queen's Hospital. You've received a gunshot wound, but you're going to be okay."

She made it sound as if he'd been given an award for good behavior.

"Marcus, thank God you're okay," said a voice from behind the nurse.

A familiar face hovered over her shoulder.

Who was that guy? He searched for a name to attach to the face.

Yeah, that was right. Graham something. The publicist his publisher had hired.

Was he okay? Marcus wondered, struggling to sit up.

It was hardly the word he would have chosen for the way he felt.

"Mr. Kastanos," the nurse said, pressing gently on his shoulder. "I'll send the doctor in to speak with you in a bit. For now, please keep yourself supine and try to rest."

She exited the room, leaving Graham to stare down at him. After waking up in a hospital bed, Marcus really felt that someone he loved should have been hovering over him with a worried look. Not his publicist, a man with a bulbous nose and the ugliest tie Marcus had ever seen. He'd only met the guy a week ago.

Maybe if he pretended to be asleep again, the publicist would go away. He wanted someone else here.

But who would he even call? Who would come?

Where was Annika? He tried to remember. As a foreign correspondent, she traveled a lot.

Oh, now he remembered. She was in Beirut.

Not likely she'd drop everything and come rushing to his bedside, especially if he was, as the nurse had said, going to be okay.

"That was aright close one, old boy. But the doctor says the bullet went straight through you, missed all the messy bits and came out the other side."

"The bullet?" he tried to say, but his voice was a croaky whisper.

"What bullet?" This time his voice was slightly more audible.

"You do remember being shot, don't you?"

No. Well, maybe... The flurry of fragmented images in his mind started to make sense.

"Do you remember being on the set of London Daily?"

"And do you recall anything that happened—"

"Yeah." He closed his eyes as the memories came hurtling back at him, bringing with them a wave of nausea.

"They caught the bugger, you'll be glad to hear. He's in police custody."

Marcus struggled to formulate the question. "How'd he get a gun... inside... with all the security?"

"Unfortunately, the station's security weren't using metal detectors, so it wouldn't have been difficult to conceal a gun."

With his public appearance and the death threats issued against him?

"Sorry, old boy. Salman Rushdie was here just last year without incident and has a fatwa on his head. I suppose that made everyone a bit lackadaisical."

Graham pulled up a chair close to the bed and sat down, then made a loud snorting sound and cleared his throat.

"Say, do you want me to call anyone?" he offered. "Family? Friends? Let them know what's happened?"

Marcus closed his eyes. He didn't want to lie here staring at Graham, but he didn't want to be alone right now, either. Yet he had no family, no wife, no girlfriend unless he counted Annika, and he wasn't sure she wanted to be counted. How could he have never realized before that their relationship was pretty much a long-distance sex-buddy arrangement?

He couldn't think of anyone who'd want to jump on a plane and hurry to his side. Sure, he had friends, but...

The reality was, none of his friends were close enough to stay by his bedside.

And he knew why.

He left people behind. It was what he did, what he'd always done. It protected him from ever getting too close to anyone.

And now he had exactly what he'd always thought he wanted—no one. No emotional ties.

He'd succeeded at keeping everyone who ever might have gotten close at an impossible distance.

For the first time in years, he wished he hadn't.

"It'll be on the news," he finally said. "Anyone who cares can see it there."

But who would care, when there wasn't a person in the world who would beckon him to rush to his or her side in a crisis? He supposed he should feel lucky he had his paid publicist to keep him company now. Graham was better than no one.

1. The One That Got Away

Book Description Harlequin Enterprises, Limited. Mass Market Paperback. Condition: Good. A copy that has been read, but remains in clean condition. All pages are intact, and the cover is intact. The spine may show signs of wear. Pages can include limited notes and highlighting, and the copy can include previous owner inscriptions. At ThriftBooks, our motto is: Read More, Spend Less. Seller Inventory # G0373716419I3N00