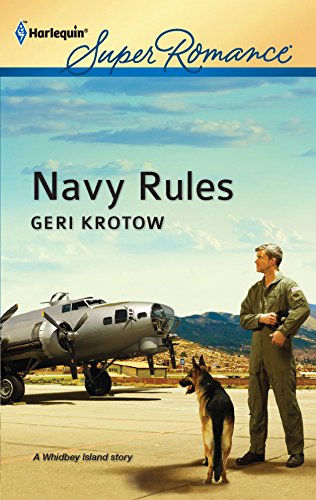 Wounded during a military rescue, Commander Max Ford returns to a naval base on Whidbey Island to recover. And part of his treatment involves working with a therapy dog. Max is surprised to learn that the dog's owner is Winnie Armstrong, widow of his closest friend. She and Max were close in those months following her husband's death. But they drifted apart, until that one night two years ago. The night friendship turned to passion...

Now he's even more shocked to learn that Winnie has been keeping a secret from him. A baby girl. His daughter. It's even more important he heal so he can be a part of his child's life—and Winnie's. Because all the attraction that pulled them together that one night is still there...only stronger.

About the Author:
Geri Krotow is a Naval Academy graduate and Navy veteran. She has traveled to and lived in many places abroad, including South America, Italy and Russia. Her family has finally settled down in Central Pennsylvannia but Geri still writes about all the places she's been. An award-winning author, Geri writes the Silver Valley PD for Harlequin Romantic Suspense www.gerikrotow.com
Excerpt. © Reprinted by permission. All rights reserved.:
Winnie Perrin Armstrong stared at her computer screen while she stroked her dog's belly with her foot. Sam, a medium-size shepherd mix, lay under the desk in her bedroom while she indulged in her morning luxury of reading the news before the girls woke up.

The only light in the room came from the glow of the screen. Winnie read the national news highlights, then switched to the local news. She kept an eye on the time—the girls would wake up in the next ten minutes or so.

The headline didn't surprise her. But the accompanying photo and its caption, Commander Max Ford Plans to Coach Youth Soccer, made her sit up straight and grasp her desk.

Commander Max Ford, USN, brought his EA-6B Prowler Squadron back from war. He saved dozens of the sailors from a suicide bomber attack just weeks before the squadron was due to depart from Afghanistan. Ford returned to Whidbey last month after a lengthy stint of rehabilitation at the Walter Reed National Military Medical Center in Washington, D.C. He has signed up to coach community youth soccer. With so many of our children's parents deployed, the soccer teams are in need of dedicated coaches. Ford leads the way for returning vets to fill the gap and help our young soccer players.

Good thing she planned to tell Max about Maeve—the result of their night together after the Air Show two summers ago...

Winnie looked back at the article and bit her lip. It didn't mention Max's wounds, no doubt out of respect for his privacy. She knew about his injuries because she and Sam were going to pay Max a visit today.

You should've done it ages ago.

Sam wagged his long, silky tail and she caught a glimpse of the blond fur beneath the black. It matched the fur that grew horizontally out of his pointed ears and in swirls on his belly.

"Good boy, Sam. You've got a big day ahead of you." The first Monday in March. Time to finally come clean with Max. And after she met with him, she'd have to talk to her parents.

So he was going to coach community soccer. Was that going to be another complication? What if he coached Krista's team?

Sam licked her hand as if he wanted her to know he understood. Of course he didn't; he was a dog and while his gifts of compassion and companionship were priceless, he wasn't the human partner Winnie had once had.

She let a happy memory of them walking on the sand in Penn Cove wrap around her heart. It'd been more than five years since he died and she still missed him more than she'd ever told her family. Because they lived so close, less than an hour away in Anacortes, they saw her and the girls regularly. They saw how bereft she still was, yet they never pressed her about finding a new man. Even after Maeve was born last year. Winnie loved them for that.

"Mom!" Krista barged into her room, all arms and legs at thirteen. "Maeve's up and you forgot to dry my jeans again."

"I'll get her. Throw them in the dryer. They'll be done in time for the bus." Winnie got up and headed for the baby's room.

Krista let out a long-suffering sigh as she followed her into the hallway.

"Yes, I did, but, Mom, you've got to remember to dry things right away or they'll be wrinkled."

"Good morning, sunshine." Winnie ignored Krista's adolescent rant and took in every second of Maeve's tiny-toothed grin. The eighteen-month-old clung to the side of her crib and looked up at Winnie as though she were seeing a deity.

"Hi, baby sis." Even Krista was under Maeve's spell, talking to the baby while Winnie changed the soggy diaper.

Winnie put on Maeve's pants, picked up the baby and turned to Krista. "Let's go get breakfast before you start in on me about the laundry, okay?"

This was like the beginning of any other day in the Armstrong household. Except that today Maeve's father was going to find out he had a daughter.

Winnie was going to tell him.

"Sorry, Mom." Krista was immediately apologetic and her sincerity made Winnie want to pull her close and squeeze hard. Krista had been through so much, not the least of which was accepting that her mother was having a baby two years ago. A baby by a man Winnie had told her "once meant a lot to our family, but can't be with us right now."

A few moments later, as Winnie prepared Maeve's breakfast, Krista suddenly asked, "Mom, are you ever going to tell me who Maeve's father is?"

"Whoops! Thank goodness the baby's in her high chair!" Her voice was high and brittle as she struggled with an honest answer for Krista.

"I heard you, Krista. As a matter of fact, Maeve's dad is back in town. And I plan to tell him about her soon. I'll fill you in after I do, okay? I can't thank you enough for being such a loving sister to Maeve through all of this, Krista."

Krista shrugged as she ate her toasted muffin.

Winnie sighed. They'd both had hard times when Tom died. But that was more than five years ago. And then the unexpected pregnancy—by a man with whom she'd shared an unexpected attraction. That was something she could beat herself up about, but what was the point? She had a beautiful baby daughter and Krista had a baby sister. They were a family.

Still, living by her motto of being open with her children, unlike the way her mother had been with her, was growing more difficult as Krista matured. She'd already been wise beyond her years, but the addition of Maeve to their family had catapulted Krista from preteen to teenage older sister.

"Honey, life isn't all hard times. We've had more than our share, I admit, but there are people with problems so much bigger than ours. You do understand that, don't you?"

"Not many kids I know lost their dad in a Navy plane crash, Mom."

"No, but trust me, there are a lot of kids your age who have lost a parent to war."

"I know that, Mom." Krista drank down the rest of her milk. "I can't miss the bus and I still need to get my jeans on."

Winnie smiled. "You mean, you don't want to go to school wearing your airplane pajamas?"

Krista flashed her a grin before she disappeared into the laundry room. She was open with Winnie about her lifelong love of airplanes and flying, but at her sensitive middle-school age, she wasn't so quick to share all her dreams with her friends.

A few minutes later, Krista allowed Winnie to kiss the top of her head before she bent down to pick up her overstuffed backpack.

"Bye, bye!" She wiggled her fingers at Maeve, who was in the step-down living room in full view of the kitchen, playing with her soft blocks. Sam sat near her, as if babysitting.

"Ba ba, sisseee!" Maeve was just like Krista had been at the same age. A busy chatterbox.

The front door closed behind Krista and Winnie looked at Maeve, who'd decided to return to the kitchen.

"Let's get you moving, too, girlfriend. Mommy's got a lot of work to do today."

The refrain of "My Girl" came from her cell phone and she smiled when saw her sister's ID.

"Hey, wait a minute, Winn. Brendan, put the hammer down right now!" Robyn said in her stern "Mommy" voice. Ten years older than Winnie, Robyn and her husband had undergone in vitro fertilization, which had produced the two-year-old who ruled his parents' lives.

"How did he get the hammer?"

"Doug and Brendan made a birdhouse yesterday and the tools are still on the workbench." Robyn's voice reflected impatience—at Winnie's constant nagging to be more mindful of safety or at Brendan's morning antics, Winnie couldn't be sure.

"So how did he get into the garage?" Winnie loved her sister but they raised their kids very differently. Winnie had been an organized parent from the start; it had seemed like a prerequisite for a Navy wife. Not to mention her sanity, which relied on tidiness. Even as a child Winnie liked to have all her toys and books organized.

"He's figured out how to open the doors."

"ouch. Time for some sliding bolts, up high." Robyn sighed.

"Yeah, I think I'm headed to Home Depot with the little guy today. What are you up to?"

"The usual. I don't have any orders going out until next week," she said, referring to her fiber orders. Sales would pick up over the next several weeks, as retailers were beginning to order for the following season. She'd started the business from scratch four years ago when she'd discovered, by accident, that there were a number of private farms on the island that raised fiber-producing animals, including sheep, alpaca and llamas.

Winnie's lifelong love of knitting had led her to the few knitting and crochet groups in the area, where she met the farm-owners and listened to their wistful dreams of being able to market their own fiber. Winnie had dreamed with them until Tom's death—and the realization that she needed a means to provide for her and Krista. The insurance they'd received was more than generous, but Winnie never looked at it as anything other than a means to pay for Krista's future education.

Winnie had founded Whidbey Fibers with only three sheep farmers. Today she had almost two dozen clients not just on Whidbey but on a few of the outlying islands like San Juan and Orcas, too. Her fibers included merino, alpaca, llama and angora.

"You always say you don't have a lot going on, Winn, but you've got tons to do every day or...