Items related to Before Sunrise 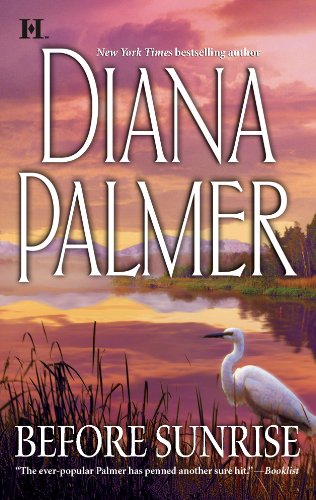 Jeremiah Cortez thought he'd left the past behind him —  especially the part of his past concerning Phoebe Keller. Once she had stirred his world-weary soul. Now, years later, seeing the blond beauty again sparks dormant desires. But he has to push his emotions aside — he has new ties that can't be broken.
Phoebe thought her feelings for Cortez were buried as deep as the artifacts she studies in her museum. An expert in Native American culture, she has her doubts when an anthropologist claims to have discovered a Neanderthal skeleton on a nearby reservation. But before Phoebe can pursue the matter, the professor in question turns up dead — and the FBI sends Cortez to investigate.
Now, as the two delve further into the murder, they find themselves entangled in a world of conspiracy, deception...and a love more powerful than anything they've ever known.

The prolific author of more than one hundred books, Diana Palmer got her start as a newspaper reporter. A New York Times bestselling author and voted one of the top ten romance writers in America, she has a gift for telling the most sensual tales with charm and humor. Diana lives with her family in Cornelia, Georgia.

THE CROWD WAS DENSE, but he stood out. He was taller than most of the other spectators and looked elegant in his expensive, tailored gray-vested suit. He had a lean, dark face, faintly scarred, with large, almond-shaped black eyes and short eyelashes. His mouth was wide and thin-lipped, his chin stubbornly jutted. His thick, jet-black hair was gathered into a neat ponytail that fell almost to his waist in back. Several other men in the stands wore their hair that way. But they were white. Cortez was Comanche. He had the background to wear the unconventional hairstyle. On him, it looked sensual and wild and even a little dangerous.

Another ponytailed man, a redhead with a receding hairline and thick glasses, grinned and gave him the victory sign. Cortez shrugged, unimpressed, and turned his attention toward the graduation ceremonies. He was here against his will and the last thing he felt like was being friendly. If he'd followed his instincts, he'd still be in Washington going over a backlog of federal cases he was due to prosecute in court.

The dean of the university was announcing the names of the graduates. He'd reached the Ks, and on the program, Phoebe Margaret Keller was the second name under that heading.

It was a beautiful spring day at the University of Tennessee at Knoxville, so the commencement ceremony was being held outside. Phoebe was recognizable by the long platinum blond braid trailing the back of her dark gown as she accepted her diploma with one hand and shook hands with the dean with the other. She moved past the podium and switched her tassel to the other side of her cap. Cortez could see the grin from where he was standing.

He'd met Phoebe a year earlier, while he was investigating some environmental sabotage in Charleston, South Carolina. Phoebe, an anthropology major, had helped him track down a toxic waste site. He'd found her more than attractive, despite her tomboyish appearance, but time and work pressure had been against them. He'd promised to come and see her graduate, and here he was. But the age difference was still pretty formidable, because he was thirty-six and she was twenty-three. He did know Phoebe's aunt Derrie, from having worked with her during the Kane Lombard pollution case. If he needed a reason for showing up at the graduation, Phoebe was Derrie's late brother's child and he was almost a friend of the family.

The dean's voice droned on, and graduate after graduate accepted a diploma. In no time at all, the exercises were over and whoops of joy and congratulations rang in the clear Tennessee air.

No longer drawing attention as the exuberant crowd moved toward the graduates, Cortez hung back, watching. His black eyes narrowed as a thought occurred to him. Phoebe wasn't one for crowds. Like himself, she was a loner. If she was going to work her way around the people to find her aunt Derrie, she'd do it away from the crowd. So he started looking for alternate routes from the stadium to the parking lot. Minutes later, he found her, easing around the side of the building, almost losing her balance as she struggled with the too-long gown, muttering to herself about people who couldn't measure people properly for gowns. "Still talking to yourself, I see," he mused, leaning against the wall with his arms folded across his chest.

She looked up and saw him. With no time to prepare, her delight swept over her even features with a radiance that took his breath. Her pale blue eyes sparkled and her mouth, devoid of lipstick, opened on a sharply indrawn breath.

She looked as if she'd run straight into his arms with the least invitation, and he smiled indulgently as he gave it to her. He levered away from the wall and opened his arms.

She went into them without any hesitation whatsoever, nestling close as he enfolded her tightly.

"You came," she murmured happily into his shoulder.

"I said I would," he reminded her. He chuckled at her unbridled enthusiasm. One lean hand tilted up her chin so that he could search her eyes. "Four years of hard work paid off, I see."

"Certifiable," he agreed. His gaze fell to her soft pink mouth and darkened. He wanted to bend those few inches and kiss her, but there were too many reasons why he shouldn't. His hand was on her upper arm and, because he was fighting his instincts so hard, his grip began to tighten.

She tugged against his hold. "You're crushing me," she protested gently. "Sorry." He let her go with an apologetic smile. "That training at Quantico dies hard," he added on a light note, alluding to his service with the FBI.

"No kiss, huh?" she chided with a loud sigh, searching his dark eyes.

One eye narrowed amusedly. "You're an anthropology major. Tell me why I won't kiss you," he challenged.

"Native Americans," she began smugly, "especially Native American men, rarely show their feelings in public. Kissing me in a crowd would be as distasteful to you as undressing in front of it."

His eyes softened as they searched her face. "Whoever taught you anthropology did a very good job."

She sighed. "Too good. What am I going to use it for in Charleston? I'll end up teaching..."

"No, you won't," he corrected. "One of the reasons I came was to tell you about a job opportunity."

Her eyes widened, brightened. "A job?"

"Am I ever!" A movement caught her eye. "Oh, there's Aunt Derrie!" she said, and called to her aunt. "Aunt Derrie! Look, I graduated, I have proof !" She held up her diploma as she ran to hug her aunt and then shake hands with U.S. Senator Clayton Seymour, who'd been her aunt's boss for years before they became engaged. "We're both very happy for you," Derrie said warmly.

"Not directly," Cortez said, but he shook hands anyway. Clayton's firm lips tugged into a smile. "I've heard a lot about you from my brother-in-law, Kane Lombard. He and my sister Nikki wanted to come today, but their twins were sick. He won't forget what he owes you. Kane always pays his debts."

"I was doing my job," Cortez reminded him.

"What happened to Haralson?" Derrie asked curiously, referring to the petty criminal who'd planted toxic waste and in one fell swoop almost cost Clayton Seymour his congressional seat and Kane Lombard his business.

"Haralson got twenty years," he replied, sticking his hands deep in his pockets. He smiled coldly. "Some cases I enjoy prosecuting more than others."

"Prosecuting?" Derrie asked. "But you told me last year in Charleston that you were with the CIA."

"But for the past few years, I've been a federal prosecutor."

"Then how did you wind up tracking down people who plant toxic waste?" she persisted. "Just lucky, I guess," he replied smoothly.

"That means he's through talking about it," Phoebe murmured dryly. "Give up, Aunt Derrie."

Clayton gave Phoebe a curious glance, which she intercepted with a smile. "Cortez and I are friends," she told him. "You can thank his investigative instincts for saving your congressional seat."

"I certainly do," Clayton replied, relaxing. "I almost made a hash of everything," he added, with a warm, tender glance toward Derrie, who beamed up at him. "If you're going to be in town tonight, we'd love to have you join us for supper," he told Cortez. "We're taking Phoebe out for a graduation celebration."

"Of course. Then we'll see you again sometime, in D.C.," Derrie said, puzzled by the strong vibes she sensed between her niece and Cortez.

"I've got something to discuss with Phoebe," he said, turning to Derrie and Clayton. "I need to borrow her for an hour or so."

"Go right ahead," Derrie said. "We'll go back to the hotel and have coffee and pie and rest until about six. Then we'll pick you up for supper, Phoebe."

Phoebe didn't hesitate. "They'll never miss me," she said, and waved as she joined Cortez.

"An honor graduate, too," he mused as they walked back through the crowd toward his rental car. "Why doesn't that surprise me?"

"Anthropology is my life," she said simply, pausing to exchange congratulations with one of her friends on the way. She was so happy that she was walking on air.

"Nice touch, Phoebe," the girl's companion murmured with a dry glance at Cortez as they moved along, "bringing your anthropology homework along to graduation."