Items related to The Perfect Match 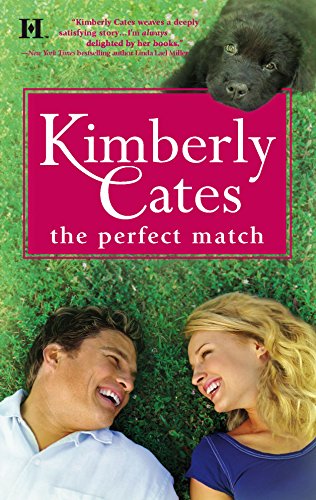 SHE'S GOT A KNACK FOR TROUBLE—AND IMPOSSIBLE DREAMS...

At twenty-seven, free-spirited Rowena Brown has never fit in anywhere—not with her ambitious family, not at veterinary school and certainly not in any relationship she's ever had. But surely the good people of Whitewater, Illinois, will welcome a pet-store owner whose talent is finding the perfect home for "problem" animals, even if they do have names like Destroyer....

When a hundred-pound monstrosity of a dog appears at his door, Whitewater deputy Cash Lawless knows he's in trouble. A single dad with two young daughters, Cash wants more chaos in his life about as much as he wants to find himself drawn to the eccentric Rowena. But if he's not careful, the

unruly hound and his unconventional owner might reignite Cash's hopes along with his heart—and help them all find home at last.

Kimberly Cates lives in Illinois with her family. She is currently working on her next romance for Pocket Books.

The trouble with fairy godmothers was they never hung around long enough to see how their magic turned out, twenty-seven-year-old Rowena Brown thought, racing up the steps to the Whitewater Sheriff's office. Now, Cinderella—she'd gotten the lowdown about the coach turning back into a pumpkin come midnight. And in Sleeping Beauty—even the Disney version—Maleficent blabbed to the whole kingdom about the princess's pricking-her-finger-on-a-spindle clause.

But when great-auntie Maeve MacKinnon from County Meath had predicted Rowena would meet her soul mate in this quaint Illinois town, the ninety-year-old Irishwoman had failed to mention that three weeks after Rowena moved in, her personal bad boy would end up in the slammer for breaking and entering. God knew how much it was going to cost her to bail him out.

Rowena shook wisps of waist-long curls the color of daffodils out of her eyes and hugged her beloved red and gold tapestry bag tight against her in an effort to calm the butterflies rioting in her middle. Her sisters had claimed that Rowena could hide a kindergartener in the purse made out of a salvageable piece of antique Oriental rug she'd gotten at an art fair. Unfortunately at the moment, she was about as likely to find bail money inside the thing as she was a gap-toothed five-year-old.

Every cent Rowena had she'd invested in spiffing up her newshop on Main Street: nailing on a roof that didn't leak, buying bright chrome cages to line the walls and putting in a "get acquainted" room designed to tempt even the most retiring wall-flower to play. But if Clancy had already gotten himself in this much trouble, there was obviously one more accessory she needed to invest in. Stronger locks.

In a swirl of purple peasant skirt and jangling bracelets she shoved open the door to the drab brick building and rushed up to the desk labeled Information. Rowena couldn't help doing a double-take. The officer/receptionist who presided over the gateway to the room beyond looked disturbingly like one of those guys in the shako hats who guarded the Wicked Witch's castle in The Wizard of Oz.

He seemed as taken aback by Rowena's appearance as she was with his. She should be used to it by now. But then, ever since she'd set foot in Whitewater, the whole town had been gaping at her as if she'd just dropped in from another planet. Maybe she had. Chicago, with its bustling streets and delicious diversity, seemed a galaxy away.

"I've come about Clancy Brown," Rowena told the receptionist as she tried to shake the image that kept popping into her mind—the pot-bellied deputy chatting it up with one of those creepy flying monkeys.

"Brown, Brown..." the man mumbled to himself as he scanned the register in front of him. "I'm sorry, ma'am. There's no one here by that name."

Panic buzzed in Rowena's veins. "Clancy has to be here! My neighbor said one of your deputies picked him up about an hour ago."

The deputy grabbed a mug that said Kiss My Bass. "Your neighbor must have been mistaken."

"That's impossible. The deputy gave her this card when he hauled Clancy off in his squad car."

Smith—that was the name on the officer's plastic name tag—slugged down a gulp of coffee as Rowena dug through her purse in search of the cardboard rectangle she'd plucked from Miss Marigold Pettigrew's frantically gesticulating hands twenty minutes ago. The sharp corner of the card jammed under Rowena's thumbnail. Breath hissed between her teeth at the sting, but she dragged the card out, triumphant.

"Here it is," Rowena said, resisting the temptation to pop her thumb in her mouth to cool the pain. Instead she squinted at the embossed lettering. "Deputy Cash Lawless, Whitewater Sheriff's Office."

"Cash? Holy sh—" Smith choked, coffee threatening to spray the papers on his desk. He thumped his chest in an obvious effort to clear his windpipe. He struggled to sober himself, but his eyes were actually watering with the effort it took. "Excuse me, ma'am," he said, clearing his throat. "I didn't realize that Deputy Lawless was the arresting officer in your case. The perpetrator you're looking for—Mr., um, Brown—is currently awaiting transport to—"

"Death row if Cash has anything to say about it," a rangy guy with a nose roughly the size of the Sears Tower called out, the room erupting in laughter.

"Death row?" Rowena's stomach whirled as the Brown family's hamster had the time her younger sister Ariel bounced Nibbles down the basement stairs in one of those clear plastic balls. "You can't mean that!"

"Potter, you're a real comedian." Smith shot a quelling glare into the cluster of desks and uniformed officers. "Can't you see the lady is upset? Hey, Cash?" he bellowed, angling his gaze in another direction. "The lady here needs to see you about that burglary you just busted up." Shuffling, scuffling sounds came from all over the office as everyone craned to see the scene unfolding.

Applause broke out as a man stood up from the desk in the far right corner of the room, his back to Rowena and the chorus of gibes ringing out from his coworkers.

"...deserves a medal for courage under fire..."

But Rowena barely heard the teasing. The business card fluttered, unheeded, from her numb fingers as she focused on the rear view of the dark-haired man who was the focus of the whole room's attention. If Deputy Smith had reminded her of an evil castle guard, this Lawless seemed more like a general about to institute a Scorched Earth campaign and enjoy every minute of it.

Stiff shoulders stretched the back of a khaki shirt with sharp creases still ironed into the sleeves as he hung up the phone he was talking on. Dark hair cropped with almost military precision didn't come close to reaching his collar. His well-tailored pants skimmed an ass a jeans model would envy, muscular legs seeming almost too long to be real.And clean? Her mom could do surgery on that desk of his. Rowena figured there wasn't a speck of lint or dog hair in the world rash enough to cling to the man's clothing. Although women would probably stand in line to take them off.

She smoothed one hand down the crinkled fabric of her peasant skirt, reminding herself she'd rumpled it on purpose as Lawless turned around to face her. Every nerve in Rowena's body flashed an all-points bulletin: Warning—subject armed and dangerous. Do not approach.

The deputy even had warning flares of a sort emblazoned on his broad chest, Rowena gauged, his starched shirtfront splotched with vivid orange and yellow stains.

His features were harder to make out, half obscured as they were by the blue beanbag-shaped thing he clutched to the left side of his face. But she glimpsed a belligerent chin, a hawklike nose and a vein beating a very dangerous rhythm in his right temple.

"Head right on back there, Ms. Brown." Deputy Smith gestured with his coffee cup. "Deputy Lawless will see you now."

Rowena thanked him and started toward the far more intimidating man. Her heart raced. Deputy Lawless looked for all the world as if he was itching to shoot the place up. That is, if someone could shoot up a crowded sheriff's office with only one working eye.

And that was all Deputy Lawless had at the moment, from what Rowena could tell. The thing on his face was an icepack. His other eye, a penetrating whiskey brown, glowered at Rowena as if she'd just ripped off the collection box for the sheriff department's Widows and Orphans Christmas Fund.

Oh, God, Rowena thought as the man lowered the cold pack. His eye was almost swollen shut. This was not good. Clancy had really ticked this guy off. Was it possible that her Clancy had given him that shiner? No way, Rowena reassured herself quickly. Clancy might be completely out of control, but he would never hurt a flea.

Deputy Lawless crossed to a sink by a coffee station and dumped the icepack, then homed in on Rowena, his face un-yielding as stone.

"Deputy Lawless." She started to offer him her hand, then thought better of it, winding her fingers in the strap of her bag instead. "I'm Rowena Brown. I own the new pet shop in town."

The deputy's disapproving gaze swept from the lingerie-inspired camisole clinging to her shoulders by thin spaghetti straps to the scuffed toes of the Frye boots one of her mother's friends had broken in at a protest march in the seventies. "I know who you are."

He didn't say "everybody in town does," but Rowena could hear what he was thinking. You're the crazy lady who claims she can read animals' minds.

Not that she could, exactly. It was more like being a sort of matchmaker. Sensing when a certain person and a certain pet were destined for each other. And once that instinct kicked in, she had no peace until she'd settled them together. Another supposed "gift" from Auntie Maeve, inspired by the old tin-whistle tucked in the desk drawer at the pet shop.

Wouldn't that be big fun to explain to the stone-faced man standing before her? A smear of red on the left side of his corded throat snagged her gaze. Blood? Her lungs squeezed shut. Better to get down to the crisis at hand.

Aware of the direction of Rowena's gaze, Lawless swiped one hand against the spot on his neck, then glanced down at his stained fingers. A muscle in his jaw knotted as he grabbed a tissue and scrubbed the color away. Thank God, Rowena thought. His skin was smooth, tanned—far too luscious looking for anybody as tightly wound as he was.

"Miss Marigold ran over to my shop the instant I got back and told me she'd called you," Rowena continued. "I'm so sorry for the inconvenience. She's flighty as a hummingbird trapped in a mason jar."

Lawless gave the best Medusa impression Rowena had ever seen—the guy should have been able to turn her into stone with a look like that. The last thing Rowena needed was to get this man's back up any more than it already was.

Rowena's hand fluttered as if to sweep her too-colorful description of Marigold Pettigrew away. "What I mean to say is th...