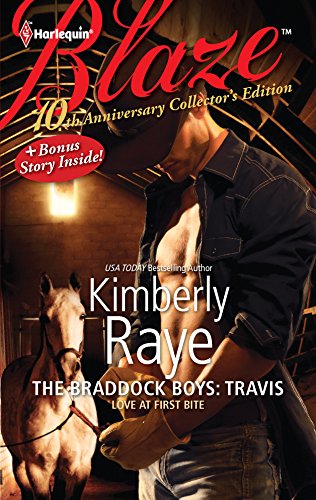 Lean, mean Travis Braddock is not your typical cowboy—he's a brooding vampire searching for the killer who cost him his family, his future, his life. The last thing he needs is a woman he can't resist. Then he met her...

Wedding planner Holly Simms is the perfect girl for a vampire on the move. Especially since she's trying to ditch her "good-girl-lookin'-to-get-hitched" image. So Holly and Travis strike up a bargain—wickedly hot sex...with no strings attached! But nothing prepared Travis for the possibility that there's room for a love life in the afterlife...

USA TODAY bestselling author Kimberly Raye started her first novel in high school and has been writing ever since. To date, she’s published more than fifty-eight novels, two of them prestigious RITA® Award nominees.  Kim lives deep in the heart of the Texas Hill Country with her husband and their young children.  You can visit her online at www.kimberlyraye.com.

There were women everywhere.

That was the first thought that struck as Travis Braddock pulled up at the front gate of the CB Ranch. The lawn in front of the sprawling two–story house had been set up for an outdoor ceremony, complete with a red carpet for the bride, huge flower arrangements and lots of free standing candelabras because it was an evening affair. He'd expected a small shindig, but there were at least a hundred people crowded into the rows of white chairs that flanked either side of the aisle. Mostly females.

A mix of perfume, lush sensuality and raw need wafted through the open window of the Land Rover and teased his nostrils. His groin tightened and he stiffened.

An overabundance of women was usually a good thing.

Particularly for a one hundred and fifty year old vampire who fed off sex as ravenously as he did blood. But Travis wasn't here because of the beast that lived and breathed inside of him.

Tonight was all about revenge.

He'd spent the last one hundred and fifty years blaming his three brothers for the massacre that had killed their family while they'd been off raiding for the Confederacy. He pointed the finger at his youngest brother Cody because he'd run off and joined the army in the first place, forcing the rest of the brothers to leave home just to keep an eye on him. He held Brent responsible because he'd refused to call it quits a week early when the war had been all but lost anyway. And he resented his oldest brother Colton because he'd forced them to detour to Austin to file an official report about their last raid before heading home to discover the carnage.

He'd blamed his brothers. But the real blame lay with his sister–in–law. Rose was the one responsible.

He ignored that tiny niggle that told him he was jumping the gun. That maybe there was some crazy explanation for what had happened. That maybe, just maybe, Rose Braddock hadn't set fire to the Brad–dock spread and fed her own family to the wolves all those years ago.

His nephew had died in that tragic fire. So had his mother. A half dozen ranch hands. And Rose herself, or so they'd all thought. The entire place had been a blazing inferno when Travis and his brothers had ridden in.

They'd been too late to save anyone that fateful night, even themselves. One minute they'd been trotting along, making plans for the future and the next, they'd found themselves smack dab in the middle of a fiery nightmare. Before they'd had a chance to figure out what was going on, much less rescue anyone, Travis and his three brothers had been attacked from behind and left for dead.

They'd died that night. But they'd also been reborn. Thanks to an ancient vampire who'd happened upon the scene and given the Braddock brothers a second chance.

He'd done the same for Rose.

That's the story Cody had recently uncovered when he'd tracked down their maker right here in Skull Creek, Texas. Rose hadn't died in the fire as originally thought. Rather, she'd fled the scene with a man. The pair had been attacked a few miles away by Indians. Garret Sawyer had arrived after the attack and done the only thing he could to help the innocent couple who'd been left for dead by a band of Com–manches. He'd turned them, just as he'd turned the Braddocks.

Like hell. Rose wasn't the loving sister–in–law, the caring mother, the perfect daughter–in–law they'd thought. She'd fooled the entire family. Every damned one of them. But not for long.

Cody had sent a letter explaining the truth about Rose and the all–important fact that he now knew her whereabouts.

The news had chased Travis around a few weeks before finally catching up with him at the Bar T Ranch in Montana. He'd been hired on to break some horses for the owner and was smack dab in the middle of a midnight session when one of the hands had flagged him down with the frayed envelope.

Inside had been a brief description of the incriminating evidence Cody had on Rose, the news that he'd finally found her and—much to Travis's astonishment—a piece of engraved cardstock requesting his presence at tonight's event.

A bonafide wedding invitation. After all the bad blood between them.

He still couldn't believe Cody had invited him. Any more than he could believe his brother was fool enough to think he would ever be satisfied with just one woman. He needed sex as much as he needed the blood. It was a need that was fierce. Intense. All–consuming. The hunger didn't lend itself to monogamy, that was for damn sure. No matter what delusion Cody was operating under, he wasn't the marrying kind. None of them were.

Travis knew that firsthand. He'd tried to settle down with one woman. To pretend he hadn't changed that fateful night, that he didn't yearn for sex the way a man craved his next breath. He'd tried, all right. And he'd failed. And Amelia, his childhood sweetheart, had gone to her grave hating his guts because he'd cheated on her.

He wouldn't do that to another woman. He wouldn't make promises he couldn't keep.

But Travis wasn't here to warn his baby bro about the nature of the beast, and he sure as hell wasn't here as a guest. He was here for information.

The thought struck and he drop–kicked it right back out of his head.

Even if he did regret the fallout with his brothers—which he didn't—there were too many bad feelings between them to make amends now. He'd turned on them and they'd turned their back on him. That was that.

Travis stared through the windshield at the lavish spread. His hyper sensitive sight zoomed in on the rose archway where his youngest brother stood facing a petite blonde. To his left, stood his other brother Brent. That sucker–punched Travis right in the gut for a long moment. Brent was the last person Travis expected to see standing next to Cody. Brent wasn't the stand–up type. He was wild. Free. Selfish.

There was no denying that he was here. Cody's best man. His friend. His brother.

Travis's chest hitched as he watched Brent hand over the ring. The gold band slid into place and Cody sealed the deal with a kiss. And just like that, the ceremony ended.

Which meant Travis was too late once again.

If he'd come to see the exchange of vows, that is, which he sure as hell hadn't. He was here for Rose. To find out her whereabouts.

He swallowed against the tightness in his throat and climbed out of the Land Rover. Walking through the gate, he crossed the massive lawn. It seemed his baby bro had done pretty well for himself riding bulls on the PBR circuit. Travis had kept tabs on him and knew Cody had won a few championships, but he hadn't realized the size of the payouts.

Obviously they had been big. Real big.

He closed the distance to the throng of guests and made his way toward the archway where the bride and groom stood amid a shower of camera flashes.

Just before he reached his target, a group of elderly women pushed in front of him to admire the bride's dress. He tried to slip through, but the women were intent on getting an eyeful.

"That dress must have cost a small fortune."

"I heard her new beau took care of the tab AND bought her this place as a wedding present."

"Can we stop all this lollygagging and go find a seat? My bunions are killing me?"

"Excuse me," Travis said to one blue–haired woman as he tried to make his way past her.

She turned a pair of cataract–clouded gray eyes on him and smiled. "My, my but you're a strapping young man." "You remind me of my dear, sweet, departed Walter before he kicked the bucket."

The last thought echoed loud and clear in Travis's head as he made eye contact with the woman and his chest hitched.

Her name was Gladys Martin and she lived at the local senior's home where the bride worked as the activities coordinator. Miranda had personally invited all of the ladies at the home and had even taken them to Austin on a shopping trip so they could all buy something special to wear on her big day. She'd also promised to take a picture with each and every one of them, which was why Gladys was waiting in line.

Travis tipped his hat and grinned. "I hate to trouble you, ma'am, but I need to scoot by you and have a quick word with the groom if you don't mind."

She looked as if she wanted to protest, but then Travis stared deep into her eyes for a long moment and acceptance sparked. She smiled. "Of course, dear."

She started to move, but then an ancient little man with a bald head and a mean expression stepped in front of her and broke the temporary spell Travis had cast.

"Hold your britches there, sonny." Arbor Crabtree poked Travis in the chest with a bony finger. "We all want our picture taken with Miranda and we're not about to be sideswiped by some young buck who cain't wait his turn. You'll get back to the end of the line lickety–split if you know what's good for you."

While Travis's charm worked with the females, he was out of luck when it came to men. Particularly Arbor. He was a two–time decorated war veteran who'd carved up an enemy sniper with his witling knife in a one–on–one battle back in 1942. He still had the knife to this day, carrying it in his pocket for bragging rights.

He also had a hemorrhoid that was making him even crankier than the fact that he'd lost at checkers to Milton Decker earlier that afternoon.

The point? Arbor was not about to be crossed by man or vampire.

Travis held up his hands in surrender. "I'm not trying to put any one out, sir. I've just come a long way is all."