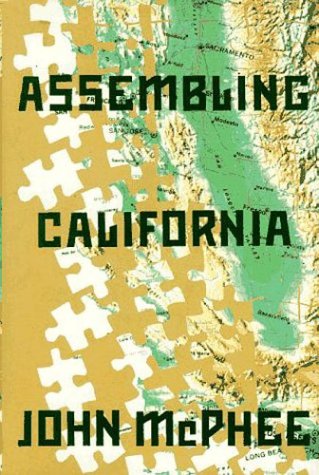 At various times in a span of fifteen years, John McPhee made geological field surveys in the company of Eldridge Moores, a tectonicist at the University of California at Davis. The result of these trips is Assembling California, a cross-section in human and geologic time, from Donner Pass in the Sierra Nevada through the golden foothills of the Mother Lode and across the Great Central Valley to the wine country of the Coast Ranges, the rock of San Francisco, and the San Andreas family of faults. The two disparate time scales occasionally intersect—in the gold disruptions of the nineteenth century no less than in the earthquakes of the twentieth—and always with relevance to a newly understood geologic history in which half a dozen large and separate pieces of country are seen to have drifted in from far and near to coalesce as California. McPhee and Moores also journeyed to remote mountains of Arizona and to Cyprus and northern Greece, where rock of the deep-ocean floor has been transported into continental settings, as it has in California. Global in scope and a delight to read, Assembling California is a sweeping narrative of maps in motion, of evolving and dissolving lands.

As an explainer, John McPhee is a national treasure. The longtime "New Yorker" staff writer has taken us inside the world of art museums, environmental groups, fruit markets, airship factories, basketball courts, and atomic-bomb labs the world over. Here he covers the complex geological history of California, the source of much news today. As Californians daily await the inevitable great earthquake that will send their cities tumbling down like so many matchsticks, McPhee piles fact on luminous fact, wrestling raw data into a beautifully written narrative that gainsays a sedimentologist's warning: "You can't cope with this in an organized way," he told McPhee, "because the rocks aren't organized." As always, McPhee enlarges our understanding of the strange, making it familiar--and endlessly interesting.

John McPhee is the author of twenty-six books, including Annals of the Former World, for which he received the Pulitzer Prize in 1999. He has been a staff writer at The New Yorker since 1965 and lives in Princeton, New Jersey.