Items related to Don Juan: His Own Version

Don Juan: His Own Version 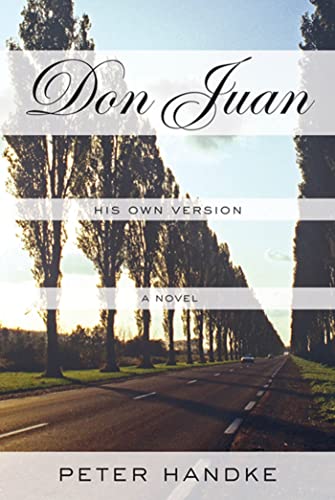 In Don Juan, Peter Handke offers his take on the famous seducer. Don Juan's story―"his own version"―is filtered through the consciousness of an anonymous narrator, a failed innkeeper and chef, into whose solitude Don Juan bursts one day. On each day of the week that follows, Don Juan describes the adventures he experienced on that same day a week earlier. The adventures are erotic, but Handke's Don Juan is more pursued than pursuer. What makes his accounts riveting are the remarkable evocations of places and people, and the nature of his narration. This is, above all, a book about storytelling and its ability to burst the ordinary boundaries of time and space.

In this brief and wry volume, Handke conjures images and depicts the subtleties of human interaction with an unforgettable vividness. Along the way, he offers a sharp commentary on many features of contemporary life.

PETER HANDKE was born in Griffen, Austria, in 1942. His many works include The Goalie's Anxiety at the Penalty Kick, A Sorrow Beyond Dreams, My Year in No-Man's Bay, On a Dark Night I Left My Silent House, and Crossing the Sierra de Gredos, all published by FSG.

1. Don Juan: His Own Version