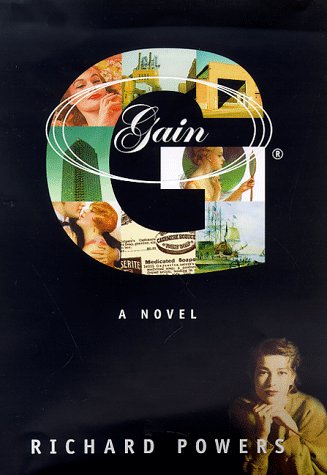 When three Boston merchant brothers coax the secret of fine soapmaking from an Irish immigrant, they set in motion a chain of events that will spin a family cottage soap works into a multinational consumer-goods giant by the millennium's end. Set against this sweeping, 170-year rise of the Clare Soap and Chemical Company is the contemporary story of Laura Bodey, a real-estate broker. Laura, her two teenage children, and her ex-husband all live in Lacewood, Illinois, a place that owes its very existence to the regional Clare factories that have nursed the town from nothing. The Clare Agricultural Division now sponsors every aspect of Lacewood, from the corn boil to the college library. But when a cyst on Laura's ovary turns malignant and the local industry is implicated, the insignificant individual and the corporate behemoth collide, forever changing the shape of American life.

Richard Powers made his debut in 1985 with Three Farmers on Their Way to a Dance, a brilliant and almost unbelievably brainy meditation on what he calls "our tortured century." Since then he has produced four more novels, showcasing his mastery of genetics, art history, computer science, theology, aesthetics, and a host of other pointy-headed fields. The author's range--and the meticulous music of his prose, which suggests a considerably less zany Thomas Pynchon--is mind-boggling. Yet his subject remains fairly constant: the acceleration, and consequent dehumanization, of contemporary life.

In Gain, Powers puts our modernity through the wringer once again. This time, though, he points the finger at one villain in particular: rampant, American-style capitalism, as exemplified by a conglomerate called Clare International. His novel, it should be said, is no piece of agitprop, but an intricate lamination of two separate stories. On one hand, Powers describes the rise (and fall and rise) of the Clare empire, beginning in its mercantile infancy: "That family flocked to commerce like finches to morning. They clung to the watery edge of existence: ports, always ports. They thrived in tidal pools, half salt, half sweet." The author's Clare-eyed narrative amounts to a pocket history of corporate America, and a marvelously entertaining one. Lest we get too enamored of this success story, though, Powers introduces a second, countervailing tale, in which a 42-year-old resident of Lacewood, Illinois, is stricken with ovarian cancer. Lacewood happens to be the headquarters of Clare's North American Agricultural Products Division, and lo and behold, it seems that chemical wastes from the plant may be the source of Laura Bodey's illness. The analogy between corporate and cancerous proliferation is pointed--too pointed, perhaps. But no other recent novelist has written so knowingly, and with such splendid indignation, about capitalism and its discontents.

"Erudite, penetrating and splendidly written...There is no gainsaying the remarkable artistry and authority with which Powers, in this dazzling book, continues to impart his singular vision of our life and times." --Bruce Bawer, The New York Times Book Review

"Powers is a writer of blistering intellect; he has only to think about a subject and the paint curls off. He is a novelist of ideas and a novelist of witness, and in both respects he has few American peers." --Richard Eder, Los Angeles Times Book Review

"Gain consists equally of horizon-busting breadth of knowledge and excruciating depth of vulnerability...Powers hovers impossibly between extremes with a tightrope walker's perfect balance. He may be at once the smartest and the most warm-hearted novelist in America today." --Melvin Jules Bukiet, The Chicago Tribune

"Richard Powers has proven himself a visionary writer...Throughout Gain there are dreamy, uncannily accurate little paragraphs on the Promethean messianism of corporate America." --Greil Marcus, The San Francisco Examiner & Chronicle

Book Description Farrar, Straus & Giroux, LLC, New York, NY, U.S.A., 1998. Hardcover. Condition: New. Dust Jacket Condition: Fine. First Edition. Signed by author on his personal, laid-in (not affixed) bookplate in black fountain ink. (Author famously does not sign the books themselves.) Richard Powers other novels include THREE FARMERS ON THEIR WAY TO A DANCE, PRISONER'S DILEMMA, THE GOLD BUG VARIATIONS, PLOWING THE DARK, and OPERATION WANDERING SOUL (a nominated finalist for the 1993 National Book Award for Fiction) and ORFEO. GALATEA 2.2 was nominated for the National Book Critics Circle award. His novel, THE ECHO MAKER, won the 2006 National Book Award for Fiction and was a finalist for the Pulitzer Prize. AS new, first edition first printing in fine, mylar-protected dust jacket. {Not emainder-marked or price-clipped} L112. Signed by Author(s). Seller Inventory # 2808