Items related to The Heart: A Novel

The Heart: A Novel 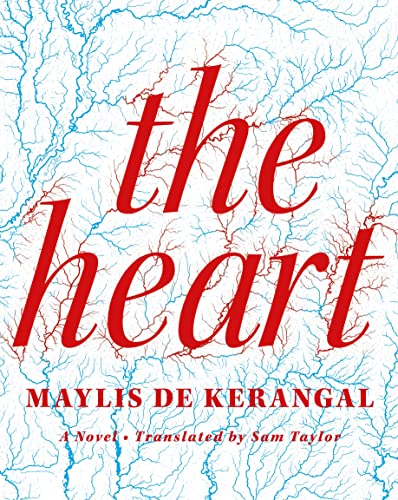 Just before dawn on a Sunday morning, three teenage boys go surfing. Returning home, exhausted, the driver lets the car drift off the road into a tree. Two of the boys are wearing seat belts; one is sent through the windshield. He is declared brain-dead shortly after arriving at the hospital. His heart is still beating.

The Heart takes place over the twenty-four hours surrounding a fatal accident and a resulting heart transplant as life is taken from a young man and given to a woman close to death. In gorgeous, ruminative prose it examines the deepest feelings of everyone involved--grieving parents, hardworking doctors and nurses--as they navigate decisions of life and death. As stylistically audacious as it is emotionally explosive, Maylis de Kerangal's The Heart has mesmerized readers in France, where it has been hailed as the breakthrough work of a new literary star.

Maylis de Kerangal is the author of several novels in French, including Je marche sous un ciel de traîne (2000), La vie voyageuse (2003), Corniche Kennedy (2008), and Naissance d'un pont (published in English as Birth of a Bridge, winner of the Prix Franz Hessel and Prix Médicis in 2010). She has also published a collection of short stories, Ni fleurs ni couronnes (2006), and a novella, Tangente vers l'est (winner of the 2012 Prix Landerneau). In addition, she has published a fiction tribute to Kate Bush and Blondie titled Dans les rapides (2007). In 2014, her fifth novel, Réparer les vivants (The Heart), was published to wide acclaim, and won the Grand Prix RTL-Lire and the Student Choice Novel of the Year from France culture and Télérama. She lives in Paris, France.

"[The Heart] is an unusual and often-ravishing novel . . . Ms. de Kerangal’s long, rolling sentences pulse along in systolic thumps, each beat punctuated by a comma; they’re packed with emotional intensity and florid imagery, and they’ve been superbly translated by Sam Taylor." ―Jennifer Senior, The New York Times

"From its first, hurtling, paragraph-long sentence, this novel vividly dramatizes each step in the organ-donation process . . . It’s the kind of science writing that’s too uncommon, inspiring wonder not by insisting on it but by chronicling every detail." ―The New Yorker

“[A] layered, meditative novel. . .These characters feel less like fictional creations and more like ordinary people, briefly illuminated in rich language, beautifully translated by Sam Taylor, that veers from the medical to the philosophical . . . . . . This novel is an exploration not only of death but of life, of humanity and fragility, 'because the heart is more than the heart.'" ―Priya Parmar, New York Times Book Review

"[A] faceted gem of a book . . . Ms. de Kerangal excels at stamping her dramatis personae with big, emphatic personalities, in keeping with the miraculous nature of their undertaking. . . . the writing in The Heart has a hurtling, onrushing quality that makes you think of blood roaring through the vascular system . . . Sam Taylor has bravely taken on the task of recapturing Ms. de Kerangal’s rhapsodic rhythms in English . . . His translation throbs with beauty, sorrow and an undimmed astonishment at the life of the body. At one point Ms. de Kerangal gives us a bird’s-eye view of nighttime Paris rising up 'under a dome of corpuscular light.' Her novel is suffused with the same human glow." ―Sam Sacks, Wall Street Journal

"I’ve seldom read a more moving book . . . De Kerangal is a master of momentum, to the extent that when the book ends, the reader feels bereft. She shows that narratives around illness and pain can energize the nobler angels of our nature and make for profoundly lovely art. One longs for more." ―Lydia Kiesling, The Guardian

"You may just take up French after you're done with The Heart, just so you can read this book in its original form―it's that beautiful, even in translation. This unlike-anything-you've-ever-read novel takes place over 24 hours, following the trajectory of a heart transplant. With its incredibly precise and exacting language as well as its dedication to challenging form, The Heart shimmers and sears at the same time." ―Meredith Turtis, ELLE

"An exquisite valentine to that engine on which every breath depends . . . Transcendent." ―More Magazine

"Sometimes it’s the simplest stories that pack the biggest punch. The Heart, the latest novel from French author Maylis de Kerangal, packs a wallop . . . A work so moving, so richly layered it strikes you less like an object and more like something divine ― like the heart itself . . . De Kerangal has written a masterpiece, a stunning feat on par with modern medicine, the love of a parent, a second chance at life." ―Laura Farmer, The Gazette

"Not only does Kerangal spellbindingly express her characters’ inner voices, but she also uses them as vehicles for richly faceted inquiries into the history and procedures of transplants, profound questions about the body and the soul, the art of surfing, the engine of lust, and the joy and anguish of love. Everything is alive and scintillating, from a rowdy soccer game to a trip to Algiers, where endangered goldfinches are captured for their exquisite songs. Kerangal infuses each beautifully rendered element with multiple dimensions of meaning and emotion to create a sensuous and propulsive novel of tragedy and hope." ―Donna Seaman, Booklist (starred review)

“I read The Heart in a single sitting. It is a gripping, deceptively simple tale―a death, a life resurrected―in which you follow along as everyone touched by the events is made to reveal what matters most to them in their lives. I was completely absorbed.” ―Atul Gawande, author of Being Mortal

“If function dictates form, Maylis de Kerangal’s The Heart is a perfect novel―its writing as measured and precise as a scalpel in the hands of a gifted surgeon. The pure beauty of these short, sharp cuts has produced a devastating and brilliant work.” ―Anita Shreve, author of Stella Bain

"[The Heart] is a splendid title and a splendid book . . . A heart transplant must be performed in the 24 hours following death, or not at all. This novel is about what happens during these 24 hours. Between the moment when a 20-year-old dies and the moment his heart finds a home in the body of a 50-year-old woman. Maylis de Kerangal describes with frantic energy and wonderful tenderness all the people, all the individual stories, all the griefs and hopes that are involved in this process . . . Before this fifth novel, [de Kerangal] was considered one of the most promising French novelists. [The Heart] is more than a promise; in France it was an immediate bestseller, and has remained so from the beginning to the end of 2014 and reconciled the most demanding literary critics with the largest audience." ―Emmanuel Carrére, author of Limonov, Publisher Weekly's Top Authors Pick Their Favorite Books of 2014