Items related to The Topeka School: A Novel 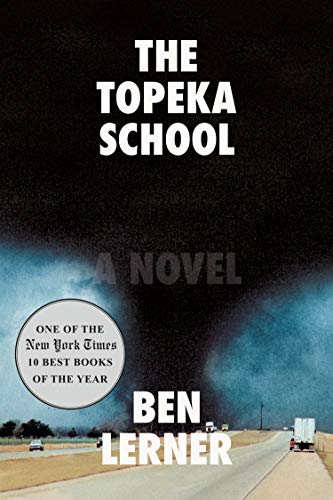 From the award-winning author of 10:04 and Leaving the Atocha Station, a tender and expansive family drama set in the American Midwest at the turn of the century: a tale of adolescence, transgression, and the conditions that have given rise to the trolls and tyrants of the New Right

Adam Gordon is a senior at Topeka High School, class of ’97. His mother, Jane, is a famous feminist author; his father, Jonathan, is an expert at getting “lost boys” to open up. They both work at a psychiatric clinic that has attracted staff and patients from around the world. Adam is a renowned debater, expected to win a national championship before he heads to college. He is one of the cool kids, ready to fight or, better, freestyle about fighting if it keeps his peers from thinking of him as weak. Adam is also one of the seniors who bring the loner Darren Eberheart―who is, unbeknownst to Adam, his father’s patient―into the social scene, to disastrous effect.

Deftly shifting perspectives and time periods, The Topeka School is the story of a family, its struggles and its strengths: Jane’s reckoning with the legacy of an abusive father, Jonathan’s marital transgressions, the challenge of raising a good son in a culture of toxic masculinity. It is also a riveting prehistory of the present: the collapse of public speech, the trolls and tyrants of the New Right, and the ongoing crisis of identity among white men.

An Amazon Best Book of October 2019: A high school debate champion growing up in Topeka, Kansas sounds like a fairly conventional character for a novel. But this is not a conventional novel—it builds through shifting points of view, and it is a book concerned with language and cultural expectation, and how one conveys the other. By the end, you begin to realize that it is a story about how we reached the national state of consciousness we inhabit today. The Topeka School is also autofiction: Lerner’s book tells the story of teenager Adam, the debate champion (as Ben Lerner was himself), and Adam’s parents, both psychologists (as were Lerner’s parents) living in Topeka (where Lerner lived). The entire family struggles at one point or another with success and privilege, something that opens up contradictions within each one of them, and the book itself is a bit of a contradiction—mixing the warmth of 90s nostalgia with the existential anxiousness we recognize so well today. There is a lot going on here, but the read is often mysteriously calming—due to Lerner’s deep relationship with language and subject matter—at the same time that he gives us a great deal to think about. Readers looking for a literary romp should probably search elsewhere. But if you’re looking to go deep, this is your guy. --Chris Schluep, Amazon Book Review

Ben Lerner was born in Topeka, Kansas, in 1979. He has received fellowships from the Fulbright, Guggenheim, and MacArthur Foundations, and is the author of the internationally acclaimed novels Leaving the Atocha Station and 10:04, and an essay, The Hatred of Poetry. His poetry collections include The Lichtenberg Figures, Angle of Yaw, and Mean Free Path. Lerner is a professor of English at Brooklyn College.

The Topeka School: A Novel Hardcover