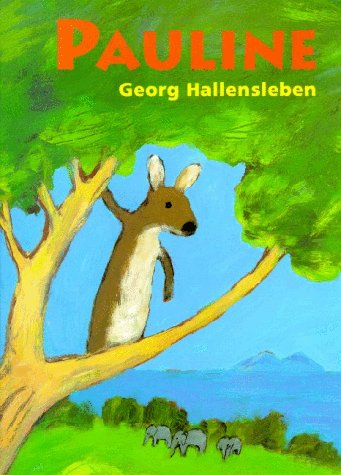 Pauline can't leave the nest until she grows big enough, but when kidnappers take her best friend Rabusius the elephant, Pauline knows she must try to save him. 10,000 first printing.

Georg Hallensleben was born in Germany, spent twenty years in Rome, and now lives in Paris, France. He is the illustrator of several books by Kate Banks, including And If the Moon Could Talk, which won the Boston Globe--Horn Book Award for Picture Books.

Illustrator Hallensleben (And If the Moon Could Talk) makes his first solo outing in this gorgeous but problematic jungle book. The title character is a "fuzzy-eared weasel" living in a tree in Africa, but with her cocoa-brown back, cream-colored stomach and black nose, Pauline resembles a kangaroo. One day, she meets a young elephant named Rabusius, and they remain playmates until hunters come along. When the men capture Rabusius and put him on a truck, Pauline saves him by dressing up as a monster in "feathers, paints, and a white mask" and frightening the men. Her minor size is no handicap so long as she wears her shocking chalk-white and blood-red disguise, which looks like tribal ritual garb and violently clashes with the ripe avocado greens and earthy browns of her habitat. Hallensleben provides a triumph of the meek over the powerful, but to do so he must break the conventions that govern people and anthropomorphic animal characters. The four-legged heroine uses strictly two-legged tactics to rescue her friend, and her behavior is inconsistent with the lush figurative paintings of African wilderness. The result is a discomfiting blend of zoology and fantasy, with talking animals vanquishing very real-looking poachers and then throwing "an enormous party" to celebrate. Ages 3-6. (Oct.)
Copyright 1999 Reed Business Information, Inc.