Items related to Kissing the Bee 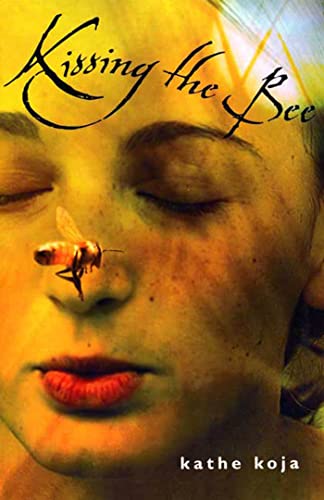 Senior year is flying by, the prom is approaching, and Dana, her best friend, Avra, and Avra's boyfriend, Emil, are about to encounter the pains and pleasures of that intricate beehive called adult life. While Dana plans on college, Avra plots escape once school is over―and plans to take Emil along for the ride. What does Emil want? He's not saying. Dana studies bees for a biology project, fascinated by their habits and their mythological imagery – but in real life, emotions can sting, and while two's company, these three may just become a crowd. As Dana reminds us, in every hive there is only one queen bee.

With remarkably textured language and a distinctive heroine, Kissing the Bee is a novel of rare depth and stark honesty that will draw readers in from the very first page.

Kissing the Bee is a 2008 Bank Street - Best Children's Book of the Year.

KATHE KOJA is the author of several notable books for young adults, including The Blue Mirror and Buddha Boy, both ALA Best Books for Young Adults, and, most recently, Going Under. She lives near Detroit, Michigan.

From Kissing the Bee

I wanted Emil. I wanted him from the very beginning, before Avra even saw him. No one knew this, even though Avra would occasionally make these odd little jokes, when we were all together: driving somewhere, the radio on and the windows down; or sitting on the patio, under the acacias; or drinking gunpowder tea in our favorite booth at the Green Bowl: If anything ever happens to me, she's say, piling my hand and Emil's together on the lacquered green table, his long fingers, the scarred silver-spoon ring she gave him, you two have to carry on in my name.
Carry what on? I would say, sliding my hand back, my skin electric where it had touched his, a living tingle.
It's the lest we could do, Emil would say. And roll his gray eyes, and smile.

His smile is so sweet. Always with his lips closed--there's this little gap between his front teeth, extremely cute but he is very self-conscious about it--long narrow lips the exact shade of Dark Peach lip balm; his hair is the color of champagne. He is just as tall as Avra but only just. My head barely comes up to his chin. . . . Once he slept with his head on my shoulder, in the backseat of Avra's car. We had gotten bored at this stupid keg party--neither one of us is much of a drinker--so we went out to the car to wait for Avra, waiting and yawning and talking and then not-talking, until Emil finally just gave up and fell asleep. His hair--it was longer then--mashed up tickling against my skin, his arm was warm and still and heavy on mine. I took little breaths, tiny little breaths, to breathe in his smell, to not break the spell and wake him up. The street-light shone sideways through the back window, that faint underwater green, and I pretended we were on the ocean somewhere, on a sea journey, a nonstop honeymoon cruise. I leaned my head sideways, craned it sideways, so my hair would brush his. Finally I fell asleep, too.