Items related to The Collected Poems: A Bilingual Edition (Revised) 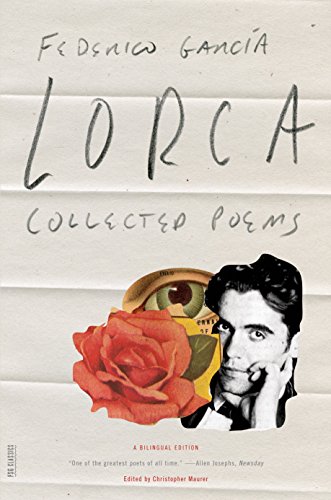 A revised edition of this major writer's complete poetical work

And I who was walking
with the earth at my waist,
saw two snowy eagles
and a naked girl.
The one was the other
and the girl was neither.
-from "Qasida of the Dark Doves"

Federico García Lorca was the most beloved poet of twentieth-century Spain and one of the world's most influential modernist writers. His work has long been admired for its passionate urgency and haunting evocation of sorrow and loss. Perhaps more persistently than any writer of his time, he sought to understand and accommodate the numinous sources of his inspiration. Though he died at age thirty-eight, he left behind a generous body of poetry, drama, musical arrangements, and drawings, which continue to surprise and inspire.

Christopher Maurer, a leading García Lorca scholar and editor, has brought together new and substantially revised translations by twelve poets and translators, placed side by side with the Spanish originals. The seminal volume Poet in New York is also included here in its entirety.

This is the most comprehensive collection in English of a poet who―as Maurer writes in his illuminating introduction―"spoke unforgettably of all that most interests us: the otherness of nature, the demons of personal identity and artistic creation, sex, childhood, and death."

Long regarded as one of the premier Spanish modernists, Federico García Lorca's newly revised Collected Poems is a welcome contribution to this outstanding poet's prolific body of work. This bilingual edition includes many recently discovered poems and revised translations, updating the completeness of the verse produced by Lorca during his short life (he died at 38). Lorca's poetry is quirky, playful, not only filled with orange groves and olive trees, but a strange, physical world where a river has "garnet whiskers" or there exists a "recumbent sky" or "mummified ocean." Lorca wrote love poems, though we can never be sure what exactly is desired. His poetry isn't abstract, but the images are sometimes a bit out of reach--if anything, he tried to give the abstract a physical presence. For example, a lovers' exchange is given dimension in "The Poet Tells the Truth": "Let the skein never end / of I love you you love me, ever burnt / with decrepit sun and old moon." What Lorca wrote of a friend gored by a bull in "Lament for Ignacio Sánchez Mejías" seems applicable to his poetry generally: "I sing of his elegance in words that moan / and I remember a sad breeze in the olive grove." Collected Poems is an important addition to any poetry collection, especially for those unfamiliar with Lorca or those who wish to read the poems in their original Spanish. --Michael Ferch

Federico García Lorca, one of Spain's greatest poets and dramatists, was born in a village near Granada in 1898 and was murdered in 1936, at the beginning of the Spanish Civil War. FSG Classics presents his finest work in Collected Poems, Poet in New York, Selected Verse, and Three Plays: Blood Wedding; Yerma; The House of Bernarda Alba.