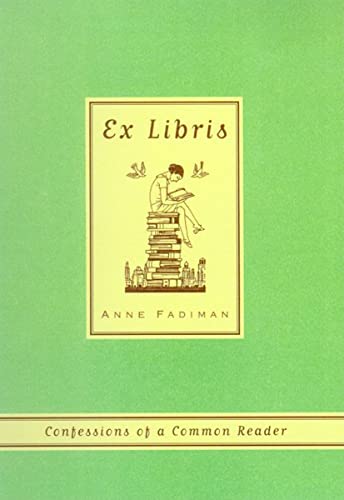 Anne Fadiman is--by her own admission--the sort of person who learned about sex from her father's copy of Fanny Hill, whose husband buys her 19 pounds of dusty books for her birthday, and who once found herself poring over her roommate's 1974 Toyota Corolla manual because it was the only written material in the apartment that she had not read at least twice.

This witty collection of essays recounts a lifelong love affair with books and language. For Fadiman, as for many passionate readers, the books she loves have become chapters in her own life story. Writing with remarkable grace, she revives the tradition of the well-crafted personal essay, moving easily from anecdotes about Coleridge and Orwell to tales of her own pathologically literary family. As someone who played at blocks with her father's 22-volume set of Trollope ("My Ancestral Castles") and who only really considered herself married when she and her husband had merged collections ("Marrying Libraries"), she is exquisitely well equipped to expand upon the art of inscriptions, the perverse pleasures of compulsive proof-reading, the allure of long words, and the satisfactions of reading out loud. There is even a foray into pure literary gluttony--Charles Lamb liked buttered muffin crumbs between the leaves, and Fadiman knows of more than one reader who literally consumes page corners. Perfectly balanced between humor and erudition, Ex Libris establishes Fadiman as one of our finest contemporary essayists.

The subtitle of Anne Fadiman's slim collection of essays is Confessions of a Common Reader, but if there is one thing Fadiman is not, it's common. In her previous work of nonfiction, The Spirit Catches You and You Fall Down, she brought both skill and empathy to her balanced exploration of clashing cultures and medical tragedy. The subject matter here is lighter, but imbued with the same fine prose and big heart. Ex Libris is an extended love letter to language and to the wonders it performs. Fadiman is a woman who loves words; in "The Joy of Sesquipedalians" (very long words), she describes an entire family besotted with them: "When I was growing up, not only did my family walk around spouting sesquipedalians, but we viewed all forms of intellectual competition as a sacrament, a kind of holy water as it were, to be slathered on at every opportunity." From very long words it's just a short jump to literature, and Fadiman speaks joyfully of books, book collecting, and book ownership ("In my view, nineteen pounds of old books are at least nineteen times as delicious as one pound of fresh caviar"). In "Marrying Libraries" Fadiman describes the emotionally fraught task of merging her collection with her husband's: "After five years of marriage and a child, George and I finally resolved that we were ready for the more profound intimacy of library consolidation. It was unclear, however, how we were to find a meeting point between his English-garden approach and my French-garden one." Perhaps some marriages could not have stood the strain of such an ordeal, but for this one, the merging of books becomes a metaphor for the solidity of their relationship.

Over the course of 18 charming essays Fadiman ranges from the "odd shelf" ("a small, mysterious corpus of volumes whose subject matter is completely unrelated to the rest of the library, yet which, upon closer inspection reveals a good deal about its owner") to plagiarism ("the more I've read about plagiarism, the more I've come to think that literature is one big recycling bin") to the pleasures of reading aloud ("When you read silently, only the writer performs. When you read aloud, the performance is collaborative"). Fadiman delivers these essays with the expectation that her readers will love and appreciate good books and the power of language as much as she does. Indeed, reading Ex Libris is likely to bring up warm memories of old favorites and a powerful urge to revisit one's own "odd shelf" pronto. --Alix Wilber

Anne Fadiman is the author of The Spirit Catches You and You Fall Down, winner of a National Book Critics Circle Award, an L.A. Times Book Prize, and a Salon Book Award. She is also the author of the essay collection At Large and At Small and the editor of Rereadings: Seventeen Writers Revisit Books They Love. Her essays and articles have appeared in Harper's, The New Yorker, and The New York Times, among other publications. She is the Francis Writer-in-Residence at Yale.