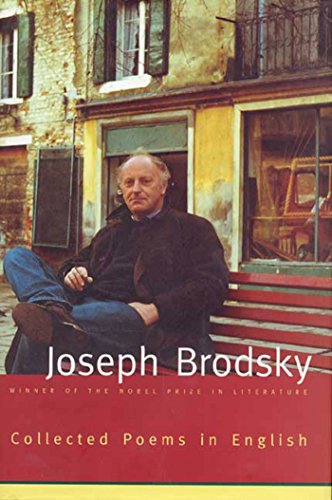 The poems of the legendary Nobel Laureate, in one volume at last

One of the greatest and grandest advocates of the literary vocation, Joseph Brodsky truly lived his life as a poet, and for it earned eighteen months in an Arctic labor camp, expulsion from his native country, and the Nobel Prize in Literature. Such were one man's wages. Here, collected for the first time, are all the poems he published in English, from his earliest collaborations with Derek Walcott, Richard Wilbur, Howard Moss, and Anthony Hecht to the moving farewell poems he wrote near the end of his life. With nearly two hundred poems, several of them never before published in book form, this will be the essential volume of Brodsky's work.

In his brilliant, mercurial prose, the late Joseph Brodsky insisted tirelessly on the superiority of poetry. It's ironic, then, that his own poems--at least in their English incarnations--tend to trail his own essays by a country mile. Ordinarily you might pin the blame on the usual suspects: the translators. But Derek Walcott, Richard Wilbur, Howard Moss, and Anthony Hecht are hardly hacks for hire, and neither were the other hardy souls who helped Brodsky to ease his Russian verse over the linguistic hurdles. No, the problem has more to do with the poet's stubborn attachment to formalism. Determined to echo his native rhyme schemes and rapid-fire cadences--and to accommodate his marvelous, maddening proliferation of metaphors--Brodsky wrenched his English poetry into one peculiar shape after another. Even when he's half-apologizing (in "A Song to No Music") for his verbal curlicues, he manages to leave most readers scratching their heads: "Scholastics? Almost. Just as well. / God knows. Take any for a spastic / consent. For after all, pray tell, / what in this world is not scholastic?"

All this would be irrelevant if Brodsky were not in fact a writer of dizzying talents. The worst poems here still bear the faint impress of impacted genius, and bring to mind Randall Jarrell's famous line about Walt Whitman--that "only a man with the most extraordinary feel for language, or none whatsoever, could have cooked up [his] worst messes." And when Brodsky manages to tame his Russian accent and his addiction to Euclidean props, he's capable of enormous power. His "Elegy: For Robert Lowell" is a perfect (and very Lowell-like) example: "In the autumnal blue / of your church-hooded New / England, the porcupine / sharpens its golden needles / against Bostonian bricks / to a point of needless / blinding shine." He's also a superb observer of the natural landscape, which forces his high-velocity imagination to proceed in leisurely, lyrical increments. Hence the opening of "In England":

And so you are returning, livid flesh of early dusk. The chalk
Sussex rocks fling seaward the smell of dry grass and
a long shadow, like some black useless thing. The rippling
sea hurls landward the roar of the incoming surge and
scraps of ultramarine. From the coupling of the splash of
needless water and needless dark arise, sharply
etched against the sky, spires of churches...


A caveat worth repeating: in his native Russian, Brodsky may well be one of the century's great poets. But his English-speaking audience would have benefited from a slimmed-down selection of his verse rather than the kitchen-sink approach of Collected Poems. And in the meantime, the essays and chalk talks collected in Less Than One and On Grief and Reason offer the best introduction to this sui generis figure, persuading even his most skeptical listeners that "truth depends on art," and not the other way around. --James Marcus About the Author: