Items related to Other Minds: The Octopus, the Sea, and the Deep Origins...

Godfrey-Smith, Peter Other Minds: The Octopus, the Sea, and the Deep Origins of Consciousness 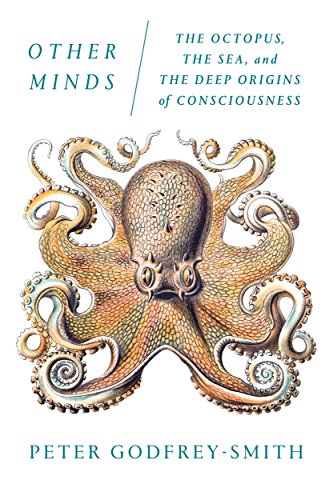 Although mammals and birds are widely regarded as the smartest creatures on earth, it has lately become clear that a very distant branch of the tree of life has also sprouted higher intelligence: the cephalopods, consisting of the squid, the cuttlefish, and above all the octopus. In captivity, octopuses have been known to identify individual human keepers, raid neighboring tanks for food, turn off lightbulbs by spouting jets of water, plug drains, and make daring escapes. How is it that a creature with such gifts evolved through an evolutionary lineage so radically distant from our own? What does it mean that evolution built minds not once but at least twice? The octopus is the closest we will come to meeting an intelligent alien. What can we learn from the encounter?

In Other Minds, Peter Godfrey-Smith, a distinguished philosopher of science and a skilled scuba diver, tells a bold new story of how subjective experience crept into being―how nature became aware of itself. As Godfrey-Smith stresses, it is a story that largely occurs in the ocean, where animals first appeared. Tracking the mind’s fitful development, Godfrey-Smith shows how unruly clumps of seaborne cells began living together and became capable of sensing, acting, and signaling. As these primitive organisms became more entangled with others, they grew more complicated. The first nervous systems evolved, probably in ancient relatives of jellyfish; later on, the cephalopods, which began as inconspicuous mollusks, abandoned their shells and rose above the ocean floor, searching for prey and acquiring the greater intelligence needed to do so. Taking an independent route, mammals and birds later began their own evolutionary journeys.

But what kind of intelligence do cephalopods possess? Drawing on the latest scientific research and his own scuba-diving adventures, Godfrey-Smith probes the many mysteries that surround the lineage. How did the octopus, a solitary creature with little social life, become so smart? What is it like to have eight tentacles that are so packed with neurons that they virtually “think for themselves”? What happens when some octopuses abandon their hermit-like ways and congregate, as they do in a unique location off the coast of Australia?

By tracing the question of inner life back to its roots and comparing human beings with our most remarkable animal relatives, Godfrey-Smith casts crucial new light on the octopus mind―and on our own.

Peter Godfrey-Smith is a distinguished professor of philosophy at the Graduate Center, City University of New York, and a professor of the history and philosophy of science at the University of Sydney. He is the author of several books, including Theory and Reality: An Introduction to the Philosophy of Science and Darwinian Populations and Natural Selection, which won the 2010 Lakatos Award. His underwater videos of octopuses have been featured in National Geographic and New Scientist, and he has discussed them on National Public Radio and many cable TV channels.

One of the Most Anticipated Books of Fall 2016 and a Top Ten Science Book of Fall 2016, Publishers Weekly

"If this is philosophy, it works, because Godfrey-Smith is a rare philosopher who searches the world for clues. Knowledgeable and curious, he examines, he admires. His explorations are good-natured. He is never dogmatic, yet startlingly incisive." ―Carl Safina, The New York Times Book Review

"Entrancing and profound . . . Godfrey-Smith takes us on a philosophical journey of a quite unique kind, for its backdrop is the sea. We accompany the author, an avid diver and admirable writer, as he explores the lives of the cephalopods and the origins of consciousness . . . As is clear from the title of Godfrey-Smith's book―as well as his enchanting descriptions of encounters with octopods―he believes these creatures have minds." ―Stephen Cave, Financial Times

"A philosopher of science and experienced deep-sea diver, Godfrey-Smith has rolled his obsessions into one book, weaving biology and philosophy into a dazzling pattern that looks a lot like the best of pop science. He peppers his latest book with vivid anecdotes from his cephalopod encounters . . . [and] relates dramatic stories of mischief made by captive octopuses . . . [but] his project is no less ambitious than to work out the evolutionary origins of subjective experience . . . The result is an incredibly insightful and enjoyable book." ―Meehan Crist, Los Angeles Times

"[Other Minds is] a terrific mix of Cousteau-esque encounters with [cephalopods] in the wild . . . wide-ranging scientific discussion, and philosophical analysis. Beautifully written, thought-provoking, and bold, this book is the latest, and most closely argued, salvo in the debate over whether octopuses and other cephalopods are intelligent, sentient beings." ―Olivia Judson, The Atlantic

"A smoothly written and captivating account of the octopus and its brethren . . . [Godfrey-Smith] stresses their dissimilarity to us and other mammals, but he also wants us to appreciate what we have in common . . . Mr. Godfrey-Smith mixes the scientific with the personal, giving us lively descriptions of his dives to 'Octopolis,' a site off the east coast of Australia at which octopuses gather." ―Colin McGinn, The Wall Street Journal

"To investigate these astonishing animals with such empathy and rigor is achievement enough. To do so while casting light on the birth and nature of consciousness, as Godfrey-Smith does here, is captivating." ―China Miéville, author of The City & The City and Kraken

"Brilliant . . . The beauty of Godfrey-Smith’s book lies in the clarity of his writing; his empathy, if you will . . . He proves that, like all aliens, these strange, beautiful creatures are more like us than our hubris allows." ―Philip Hoare, The Guardian

"Peter Godfrey-Smith's Other Minds sells us on the sentient cephalopod and the history of our own consciousness, one tentacle at a time." ―Sloane Crosley, Vanity Fair

"Fascinating . . . After reading this book, to paraphrase Byron, you will 'love not man the less, but cephalopods more.'" ―Callum Roberts, The Washington Post

"[Other Minds's] subject is so amazing, it’s hard not to be drawn along, just as Godfrey-Smith was when he extended a hand to an octopus and it reached out to return his touch, echoing his interest." ―Irene Wanner, The Seattle Times

"Godfrey-Smith skillfully links the details of evolutionary history and biology to broader philosophical debates about the nature and function of consciousness . . . [Other Minds] is a valuable contribution to some of the most basic questions about the origins of conscious life." ―Nick Romeo, Chicago Tribune

"Delightful . . . Godfrey-Smith explores the issue from many angles, beginning with a succinct and thoughtful discussion of the evolution of animals, and extending to a look at the octopus' remarkable neurological systems . . . Throughout, Godfrey-Smith intertwines his own keen work observing and filming these animals at a remarkable site off of the coast of Australia he calls 'Octopolis.'" ―Adam Gaffney, The New Republic

"Such wondrous creatures deserve a remarkable chronicler. They’ve found one in Godfrey-Smith . . . Other Minds is a superb, coruscating book. It’s exciting to see bottom-up philosophy―philosophy that starts on the reef and in the sand and then crawls slowly up towards abstraction. That’s how all philosophy should be done." ―Charles Foster, Literary Review

"Fascinating and often delightful . . . This book ingeniously blends philosophy and science to trace the epic journey from single-celled organisms of 3.8 billion years ago to the awakening and development of cephalopod consciousness." ―Damian Whitworth, The Times (London)

"Peter Godfrey-Smith, a philosopher, skilfully combines science, philosophy and his experiences of swimming among these tentacled beasts to illuminate the origin and nature of consciousness." ―The Economist

"Godfrey-Smith has set himself a double challenge with this book: (i) putting together what is known about octopi behavior and cognition and (ii) showing why this information challenges our philosophical and scientific conceptions of the mind. The result is most convincing." ―Ophelia Deroy, Science

"Deftly blending philosophy and evolutionary biology . . . Godfrey-Smith couples his philosophical and scientific approach with ample and fascinating anecdotes as well as striking photography from his numerous scuba dives off the Australian coast. He makes the case that cephalopods demonstrate a type of intelligence that is largely 'alien' to our understanding of the concept but is no less worthy of wonder . . . [Other Minds is] thoroughly enjoyable and informative." ―Publishers Weekly

"An engrossing blend of avidly described underwater adventures . . . and a fluid inquiry into the brain-body connection . . . Godfrey-Smith performs an exceptionally revealing deep dive into the evolutionary progression from sensing to acting to remembering to the coalescence of the inner voice, thus tracking the spectrum between sentience and consciousness." ―Donna Seaman, Booklist

"I love this book, its masterful blend of natural history, philosophy, and wonder. Other Minds takes us on an extraordinary deep dive, not only beneath the waves, for a revelatory and intimate view of the mysterious and highly intelligent octopus, but also through the eons, to look at the nature of the mind and how it came about. It’s a captivating story, and Godfrey-Smith brings it alive in vivid, elegant prose. His ardent and humane passion for the octopus is present on every page. A must-read for anyone interested in what it’s like to be an octopus or in the evolution of the mind―ours and the very other, but equally sentient, minds of the cephalopods." ―Jennifer Ackerman, author of The Genius of Birds

"One of the greatest puzzles of organic life is how and why certain animals became aware of themselves. Peter Godfrey-Smith uses the octopus as a portal to enter nonhuman consciousness, doing so with great sensitivity and first-hand knowledge." ―Frans de Waal, author of Are We Smart Enough to Know How Smart Animals Are?

"Exciting, dramatic, vivid, revelatory, this book is full of jaw-dropping ideas and thrilling possibilities. In beautiful, clear, evocative writing, diver-philosopher Peter Godfrey-Smith will transform your understanding of the nature of life, the course of evolution, and the development of the mind―ours and others'. Other Minds will delight and challenge every naturalist, every diver, every person who has ever wondered about the nature of other creatures' experience. In other words, everyone should read this book―and come away with a more complex and compassionate relationship to the other animals with whom we share both Earth and sea." ―Sy Montgomery, author of The Soul of an Octopus, a National Book Award finalist

"Godfrey-Smith delivers a revealing exploration of one―no, two!―of evolution's most critical turns, and one remarkable creature's trail-blazing, eight-armed foray into a mental life." ―Jonathan Balcombe, author of What a Fish Knows

"One of our species's worst qualities is our insistence on an exclusive pathway to consciousness. Fortunately Peter Godfrey-Smith has given us a roadmap to a whole new territory of thinking. Other Minds is a gracious and generous exploration of this different land, one that will make you rethink the entire notion of sentience." ―Paul Greenberg, New York Times bestselling author of Four Fish and American Catch

Other Minds : The Octopus, the Sea, and the Deep Origins of Consciousness

Other Minds: The Octopus, the Sea, and the Deep Origins of Consciousness Paperback

Other Minds: The Octopus And The Evolution Of Intelligent Life

Other Minds: The Octopus, the Sea, and the Deep Origins of Consciousness (Paperback or Softback)

Book Description Paperback or Softback. Condition: New. Other Minds: The Octopus, the Sea, and the Deep Origins of Consciousness. Book. Seller Inventory # BBS-9780374537197