Items related to Draft No. 4: On the Writing Process

McPhee, John Draft No. 4: On the Writing Process

Draft No. 4: On the Writing Process 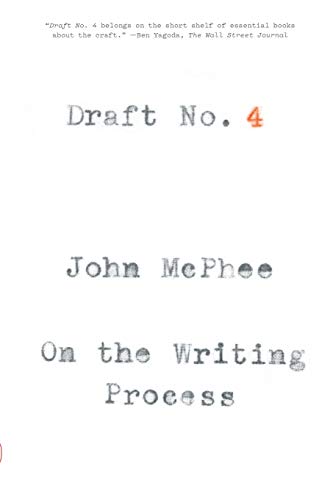 Draft No. 4 is a master class on the writer’s craft. In a series of playful, expertly wrought essays, John McPhee shares insights he has gathered over his career and has refined while teaching at Princeton University, where he has nurtured some of the most esteemed writers of recent decades. McPhee offers definitive guidance in the decisions regarding arrangement, diction, and tone that shape nonfiction pieces, and he presents extracts from his work, subjecting them to wry scrutiny. In one essay, he considers the delicate art of getting sources to tell you what they might not otherwise reveal. In another, he discusses how to use flashback to place a bear encounter in a travel narrative while observing that “readers are not supposed to notice the structure. It is meant to be about as visible as someone’s bones.” The result is a vivid depiction of the writing process, from reporting to drafting to revising―and revising, and revising.

Draft No. 4 is enriched by multiple diagrams and by personal anecdotes and charming reflections on the life of a writer. McPhee describes his enduring relationships with The New Yorker and Farrar, Straus and Giroux, and recalls his early years at Time magazine. Throughout, Draft No. 4 is enlivened by his keen sense of writing as a way of being in the world.

An Amazon Best Book of September 2017: One of the great joys of being a book nerd is the rare offer from an accomplished writer to peer inside their head, to probe the process that makes their work, well, work. The best examples (Stephen King’s On Writing, Anne Lamott’s Bird by Bird, etc.) go beyond the nuts and bolts of prose – how to tell a story in three acts, e.g. – to talk about how they view their craft, however idiosyncratic or replicable. Draft No. 4 falls squarely into this category. With this collection of eight essays, McPhee – the author of Coming into the Country, Encounters with the Archdruid, and countless other celebrated works of longform nonfiction – shares his experiences as a working writer, recalling the methods, tools (mental and otherwise), and relationships that helped him produce some of his most memorable books and articles. It’s less of a how-to than a this-is-how-I-did-it approach, offering plenty of astonishment and inspiration for aspiring writers (and just plain readers), if not easy solutions. An deft blend of art and memoir, Draft No. 4 might seem like the entertaining, amiable reminiscences of a favorite uncle, if it wasn’t also so informative and insightful. --Jon Foro, Amazon Book Review

John McPhee was born in Princeton, New Jersey, and was educated at Princeton University and Cambridge University. His writing career began at Time magazine and led to his long association with The New Yorker, where he has been a staff writer since 1965. Also in 1965, he published his first book, A Sense of Where You Are, and in the years since, he has written over 30 books, including Oranges, Coming into the Country, The Control of Nature, The Founding Fish, Uncommon Carriers, and Silk Parachute. Encounters with the Archdruid and The Curve of Binding Energy were nominated for National Book Awards in the category of science. McPhee received the Award in Literature from the Academy of Arts and Letters in 1977. In 1999, he was awarded the Pulitzer Prize for Annals of the Former World. McPhee lives in Princeton, New Jersey.

8. Draft No. 4: On the Writing Process (Paperback or Softback)