Items related to Within Reason: Rationality and Human Behavior

Within Reason: Rationality and Human Behavior 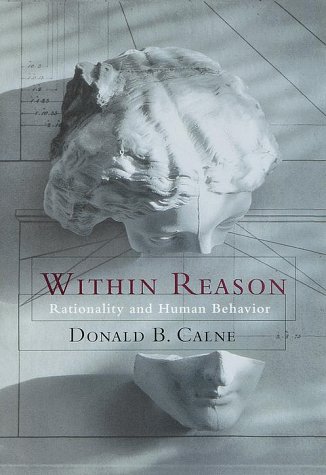 Recent breakthroughs in neuroscience have revolutionized our understanding of the human mind and human cognition. But what implications do these new findings have for the place of reason--long considered the crowning human faculty that ensured transcendent purpose--in human life? This is the profoundly important question Donald Calne, a leading neurologist and clinician, addresses in Within Reason.

His conclusions are startling, disturbing, and of immense potential usefulness. Offering both a general explanation of the way the mind works and a compelling humanistic defense of the value of science and rationality, Calne shows that reason has no direct links to the brain's pathways of pleasure and satisfaction that motivate our behavior. Reason is simply a powerful tool put into the service of goals it cannot determine or change. Within Reason brilliantly and succinctly delineates how reason--through its deployment in all domains of human endeavor, from science to religion, from ethics, commerce, and government to art and music--has enabled mankind to achieve dominance over all other forms of life without providing any specifiable content, beyond survival, to the meaning of existence.  Echoing the great religious and philosophical traditions but written from the perspective of neuroscience, Within Reason offers a new and fascinating picture of the role of rationality in both evolution and daily consciousness.

Neurology researcher and clinician Donald Calne compares defining reason to assembling an incomplete jigsaw puzzle: we don't have all the pieces, and the pieces we do have don't always fit together well. But that doesn't stop him from setting out on the ambitious task of surveying our current understanding of reason and the historical role it has played for our species.

Within Reason begins with a simple--and in some ways counterintuitive--definition of reason, calling it a mere tool, not a motivator of humanity but an enabler. A powerful and versatile tool to be sure, but one whose purpose is specific to helping us get what we want, not revealing why it is that we want it. With this supposition, Calne methodically dissects reason's role in such spheres as ethics, government, language, and religion, supporting each assertion with historical anecdotes and the writing and research of others.

If Within Reason is any indication, Donald Calne would be charming dinner company. While you might not agree with every point he makes, you'd never be disappointed by the conversation. --Paul Hughes

"Donald Calne is a renowned neurologist with a deep knowledge of brain and mind who has thought long and passionately on why we are as we are. Now, in Within Reason, he has brought together all his varied knowledge into a profound essay on the human condition. Reason emerges not as a sovereign power but as a strategy evolved of our species with no moral absolute of its own--a strategy that can be used, equally, for the noblest enterprises or the basest. In a sense, this is what philosophers from Aristotle to Kant have said, but here the thesis is grounded in Dr. Calne's deep knowledge of the human nervous system and its evolution."
--Oliver Sacks, author of Anthropologist on Mars and The Island of the Colorblind

"Calne traces the evolutionary, neuroethologic, genetic, linguistic, and cultural development of human reasoning with clarity and focus. He shows our humanness has emerged from rational thought and that our precariousness as a species will depend on a yet unperceived consilience to contain and bias reason for choosing good. Calne is in league with Steven Pinker, Antonio Damasio, and E. O. Wilson among other current important neuroscientists and Within Reason provides compelling new insights into the workings of the human brain."
--Roger N. Rosenberg, M.D., Zale Distinguished Chair in Neurology, University of Texas Southwestern Medical Center at Dallas; Chief Editor, Archives of Neurology

1. Within Reason: Rationality and Human Behavior

2. Within Reason: Rationality and Human Behavior

Book Description Pantheon. Hardcover. Condition: New. 0375403515 Has stickers on cover. Otherwise in new condition. Over 1,000,000 satisfied customers since 1997! We ship daily M-F. Choose expedited shipping (if available) for much faster delivery. Delivery confirmation on all US orders. Seller Inventory # Z0375403515ZN

3. Within Reason: Rationality and Human Behavior

4. WITHIN REASON: RATIONALITY AND H