Items related to Jimmy Corrigan: The Smartest Kid on Earth 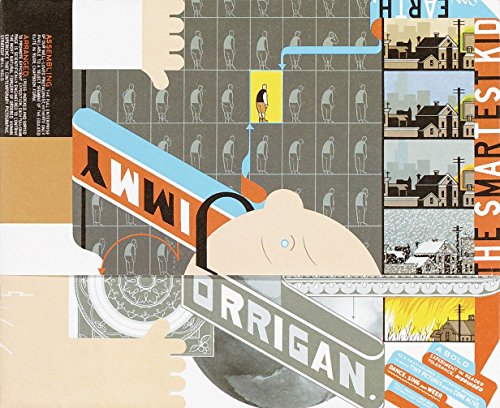 This first book from Chicago author Chris Ware is a pleasantly-decorated view at a lonely and emotionally-impaired "everyman" (Jimmy Corrigan: The Smartest Kid on Earth), who is provided, at age 36, the opportunity to meet his father for the first time. An improvisatory romance which gingerly deports itself between 1890's Chicago and 1980's small town Michigan, the reader is helped along by thousands of colored illustrations and diagrams, which, when read rapidly in sequence, provide a convincing illusion of life and movement. The bulk of the work is supported by fold-out instructions, an index, paper cut-outs, and a brief apology, all of which concrete to form a rich portrait of a man stunted by a paralyzing fear of being disliked.

About the Author:
CHRIS WARE is widely acknowledged as the most gifted and beloved cartoonist of his generation by both his mother and seven-year-old daughter. Building Stories, released in 2012, received 4 Eisner Awards, including Best Graphic Album, in 2013. His Jimmy Corrigan: The Smartest Kid on Earth won the Guardian First Book Award and was listed as one of the "100 Best Books of the Decade" by The Times (London) in 2009. An irregular contributor to This American Life and The New Yorker (where some of the pages of this book first appeared) his original drawings have been exhibited in the Whitney Biennial, the Museum of Contemporary Art in Chicago and in piles behind his work table in Oak Park, Illinois.
From Booklist:
Ware's hero is a doughy, middle-aged loser who retreats into fantasies that he is "The Smartest Kid on Earth." The minimal plot involves Jimmy's tragicomic reunion with the father who abandoned him in childhood. In abruptly juxtaposed flashbacks, Ware depicts previous generations of Corrigan males, revealing how their similar histories of rejection and abandonment culminated in Jimmy's hapless state. What makes the slight story remarkable is Ware's command of the comics medium. His crisp, painstaking draftsmanship, which sets cartoonish figures in meticulously detailed architectural settings, is matched by his formal brilliance. Ware effectively uses tiny, repetitive panels to convey Jimmy's limited existence, then suddenly bursts a page open with expansive, breathtaking vistas. His complex, postmodern approach incorporates such antiquated influences as Windsor McCay's pioneering Little Nemo strips and turn-of-the-century advertising, transforming them into something new, evocative, and affecting. His daunting skill transforms a simple tale into a pocket epic and makes Jimmy's melancholy story the stuff of cartoon tragedy. Gordon Flagg
Copyright © American Library Association. All rights reserved