Items related to Property and Freedom 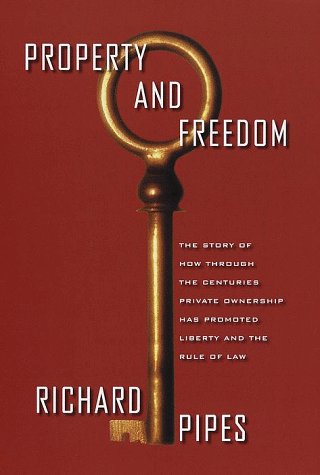 Property, asserts Richard Pipes, is an indispensable ingredient not only of economic progress but also of liberty and the rule of law. In his new book, the Harvard scholar demonstrates how, throughout history, private ownership has served as a barrier to the power of the state, enabling the Western world to evolve enduring democratic institutions. He traces the development of private property, beginning with ancient Greece and Rome, where property rights in the modern sense first made their appearance. He explains how notions of ownership matured in late medieval times with the great expansion of commerce and the growth of cities. He shows how England, as the first country to treat land as a commodity and to develop a robust defense of property rights, also became the first to institute a parliamentary government capable of restraining the powers of royalty. In pre-nineteenth-century Russia, on the other hand, the absence of private land ownership deprived its citizens of the leverage to limit the authority of their tsars.

Pipes describes the attitudes toward property of twentieth-century totalitarian states and points out that in the United States the protection of private property, rooted in the principles of the Founding Fathers, has been a major contributor to the commonweal. However, he warns that contemporary trends in the treatment of property--in a century that, he suggests, has been unfavorable to the institution--threaten to undermine the rights of citizens. And he makes clear why he believes that excessive interference by government, even when intended to promote the "common good," could lead to a diminution of freedom.

Richard Pipes offers a vigorous defense of a fundamental freedom--private property--in this engaging mix of history, economics, and political theory. Western historians "take property for granted," complains the acclaimed scholar of Russian history (and author of the masterful The Russian Revolution). Pipes argues that a greater appreciation for this institution is necessary if liberty is to survive in the 21st century. "While property in some form is possible without liberty, the contrary is inconceivable," he says. Property rights give rise to the political and legal institutions that secure freedom. Their absence practically invites atrocity. The sinister regimes of Communist Russia and Nazi Germany were fiercely opposed to private property. Those regimes' "simultaneous violation of property rights and destruction of human lives," he emphasizes, "were not mere coincidences."

While the bulk of the book compares England and Russia, showing how varying attitudes toward private property led these two nations in totally different directions, the final section examines the broad theme of property rights in the late 20th century--a period when they have come under assault, and have been made increasingly conditional, by the growing strength of the welfare state. Pipes concludes with a broadside against New Deal and Great Society programs. Although liberal readers may bristle, none can deny that Property and Freedom is the product of a great mind tackling a big theme with great enthusiasm. --John J. Miller

"A most stimulating and original book. . . . One of the most valuable volumes on property yet." --The American Spectator

"[Property and Freedom] is his most ambitious [book] ever. It is always compelling, often insightful and robust in argument." --Literary Review

"A superb book about a topic that should be front and center in the American political debate. . . . Splendid because it retains the perspective and sweep of great historical scholarship." --National Review

"        Pipes slowly builds up a strong historical case for the necessity of property rights as a prerequisite for freedoms in general." --The Washington Times