Items related to The Popes Against the Jews: The Vatican's Role...

Kertzer, David I. The Popes Against the Jews: The Vatican's Role in the Rise of Modern Anti-Semitism

The Popes Against the Jews: The Vatican's Role in the Rise of Modern Anti-Semitism 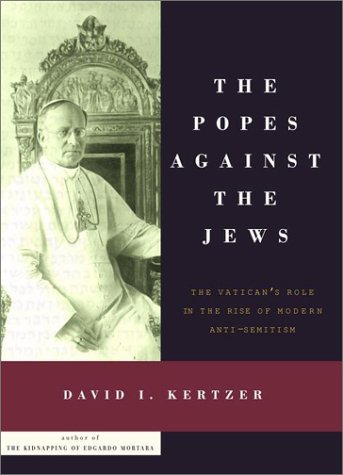 A groundbreaking historical study based on documents previously locked in the Vatican’s secret archives: The Popes Against the Jews graphically shows how the Catholic Church helped make the Holocaust possible.

Pope John Paul II, as part of his effort to improve Catholic-Jewish relations, has himself called for a clear-eyed historical investigation into any possible link be-tween the Church and the Holocaust. An important sign of his commitment was the recent decision to allow the distinguished historian David I. Kertzer, a specialist in Italian history, to be one of the first scholars given access to long-sealed Vatican archives.

The result is a book filled with shocking revelations. It traces the Vatican’s role in the development of modern anti-Semitism from the nineteenth century up to the outbreak of the Second World War. Kertzer shows why all the recent attention given to Pope Pius XII’s failure to publicly protest the slaughter of Europe’s Jews in the war misses a far more important point. What made the Holocaust possible was groundwork laid over a period of decades. In this campaign of demonization of the Jews—identifying them as traitors to their countries, enemies of all that was good, relentlessly pursuing world domination—the Vatican itself played a key role, as is shown here for the first time.

Despite its focus, this is not an anti-Catholic book. It seeks a balanced judgment and an understanding of the historical forces that led the Church along the path it took.

Inevitably controversial, written with devastating clarity and dispassionate authority, The Popes Against
the Jews is a book of the greatest importance.

The Vatican's 1998 report "We Remember: A Reflection on the Shoah" purportedly exonerated the Church of complicity in the Holocaust. In The Popes Against the Jews, David I. Kertzer argues that the report is "not the product of a Church that wants to confront its history." Kertzer's book refutes the Church's thesis that the Holocaust grew out of "an anti-Judaism that was essentially more sociological and political than religious." In fact, Kertzer asserts, those dimensions of European anti-Semitism developed "in no small part due to the efforts of the Roman Catholic Church itself." The racial laws of fascist Italy and the Nuremberg Laws of 1930s Germany, for example, were directly modeled on the Church's own rules governing treatment of Jews: until the collapse of the Papal States in the late 19th century, Jews living in these territories were forced to wear yellow badges and live in ghettos. Kertzer's arguments make for compelling reading because they're presented in story form, based on the actions of the popes themselves. Access to long-sealed Church archives allowed Kertzer to reconstruct some of the most shocking, secret conversations that occurred in the Vatican in the decades leading up to World War II. --Michael Joseph Gross

"Without sanctimony or melodrama but with meticulous documentation, David I. Kertzer tells a sickening story. THE POPES AGAINST THE JEWS is at once the calm, patient lesson of a born history teacher and an iron to burn scars in the mind." --Jack Miles, author of GOD: A BIOGRAPHY

"David Kertzer's provocative new book challenges the widely accepted distinction between Catholic anti-Judaism and modern anti-Semitism. He moves beyond recent attacks on the Vatican's record during WWII, indicting not just Pius XII but the entire tradition out of which he emerged. Many will disagree with Kertzer's conclusions, but no one will be able to ignore this disturbing history of the Papacy and the Jews in the modern era." --Brian Porter, Associate Professor of History at the University of Michigan and author of When Nationalism Began to Hate

"This is a fascinating study of an important and controversial subject. As well as being both polemical and highly readable it is scholarly and contains a great deal of unfamiliar information from the recently opened Vatican archives." --Denis Mack Smith

"Once again Kertzer has produced impressive evidence of the part played by the papacy in the growth of anti-Semitism in the twentieth century. Painful as his historical narrative may be for Catholics, it is a necessary prelude to a true reconciliation between the Catholic Church and Judaism." --John Cornwell, author of Hitler's Pope: The Secret History of Pius XII

"This is a powerful and incisive analysis of the ways in which the Vatican and the Catholic Church helped to nurture and shape the emergence of modern anti-Semitic movements that made the Holocaust possible. With the help of solid documentation and clear exposition, Kertzer sweeps away the apologetic myths that have sought to disculpate the church from direct complicity in the tragic fate of European Jewry."

1. The Popes Against the Jews: The Vatican's Role in the Rise of Modern Anti-Semitism

2. The Popes Against the Jews: The Vatican's Role in the Rise of Modern Anti-Semitism

3. The Popes Against the Jews: The Vatican's Role in the Rise of Modern Anti-Semitism