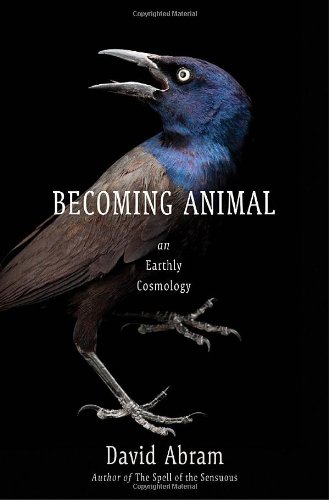 David Abram’s first book, The Spell of the Sensuous—hailed as “revolutionary” by the Los Angeles Times, as “daring and truly original” by Science—has become a classic of environmental literature. Now Abram returns with a startling exploration of our human entanglement with the rest of nature.

As the climate veers toward catastrophe, the innumerable losses cascading through the biosphere make vividly evident the need for a metamorphosis in our relation to the living land. For too long we’ve inured ourselves to the wild intelligence of our muscled flesh, taking our primary truths from technologies that hold the living world at a distance. This book subverts that distance, drawing readers ever deeper into their animal senses in order to explore, from within, the elemental kinship between the body and the breathing Earth.

With the audacity of its vision and the luminosity of its prose, Becoming Animal sets a new benchmark for the human appraisal of our place in the whole.

Richard Louv is the author of seven books, including Last Child in the Woods. He is the chairman of the Children & Nature Network, and has served as adviser to the Ford Foundation's Leadership for a Changing World award program and the National Scientific Council on the Developing Child. Read his review of Becoming Animal:

David Abram is unique among interpreters of the wild voice within us. His first book, The Spell of the Sensuous, has become a touchstone for a needed shift in our thinking about the place of humans in the world. As the poet Gary Snyder remarked, that book helped map us back into the world. In his new book, Becoming Animal, Abram offers a startling new exploration of our entanglement with the rest of nature. This time, his focus is the intimate but sadly forgotten relationship between our bodies and the earth. By excavating the most ordinary and familiar of our experiences--the perception of shadow, the recognition of depth, the transience of mood--he re-opens for us the knowing that our bodies are intertwined with the flesh of the earth. I cannot imagine another book that so gently and so persuasively alters how we look at ourselves, and reminds us that sentience was never our private possession, that our very awareness is a means of participating in a more than human world. At no other time in Western history have we needed to listen to the wild voice within us, and to Dave Abram's, as much as we do today.

David Abram is an ecologist, anthropologist, and philosopher who lectures widely around the world. He is the author of The Spell of the Sensuous, for which he received a Lannan Literary Award for Nonfiction; his essays on the cultural causes and consequences of environmental turmoil are published in numerous magazines, scholarly journals, and anthologies. David is co-founder and Director of the Alliance for Wild Ethics (AWE). He lives with his family in the foothills of the southern Rockies.

Shipping: US$ 30.17
From United Kingdom to U.S.A.
Destination, rates & speeds