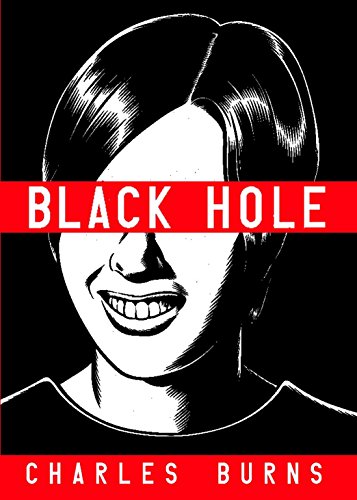 Suburban Seattle, the mid-1970s. We learn from the out-set that a strange plague has descended upon the area’s teenagers, transmitted by sexual contact. The disease is manifested in any number of ways — from the hideously grotesque to the subtle (and concealable) — but once you’ve got it, that’s it. There’s no turning back.

As we inhabit the heads of several key characters — some kids who have it, some who don’t, some who are about to get it — what unfolds isn’t the expected battle to fight the plague, or bring heightened awareness to it , or even to treat it. What we become witness to instead is a fascinating and eerie portrait of the nature of high school alienation itself — the savagery, the cruelty, the relentless anxiety and ennui, the longing for escape.

And then the murders start.

As hypnotically beautiful as it is horrifying, Black Hole transcends its genre by deftly exploring a specific American cultural moment in flux and the kids who are caught in it- back when it wasn’t exactly cool to be a hippie anymore, but Bowie was still just a little too weird.

To say nothing of sprouting horns and molting your skin...

Review:
The first issues of Charles Burns's comics series Black Hole began appearing in 1995, and long before it was completed a decade later, readers and fellow artists were speaking of it in tones of awe and comparing it to recent classics of the form like Chris Ware's Jimmy Corrigan and Daniel Clowes's Ghost World. Burns is the sort of meticulous, uncompromising artist whom other artists speak of with envy and reverence, and we asked Ware and Clowes to comment on their admiration for Black Hole:

Amazon.com: Cartoonists are about the only people today who are working like Dickens did: writing serials that appear piece-by-piece in public before the whole work is done. What's it like to work in public like that, and for as long as a project like this takes?
Charles Burns: There were a number of reasons for serializing Black Hole. First of all, I wanted to put out a traditional comic book-- I'd never really worked in that comic pamphlet format before and liked the idea of developing a long story in installments. There's something very satisfying to me about a comic book as an object and I enjoyed using that format to slowly build my story. Serializing the story also allowed me to focus on shorter, more manageable portions; if I had to face creating a 368-page book all in one big lump, I don't know if I’d have the perseverance and energy to pull it off.
Amazon.com: One thing that stuns me about this book is how consistent it is from start to finish. From the first frames to the last ones that you drew 10 years later, you held the same tone and style. It feels as though you had a complete vision for the book from the very beginning. Is that so? Or did things develop unexpectedly as you worked on it?
Burns: I guess there's a consistency in Black Hole because of the way I work. I write and draw very slowly, always carefully examining every little detail to make sure it all fits together the way I want it to. When I started the story, I had it all charted out as far as the basic structure goes, but what made working on it interesting was finding new ways of telling the story that hadn't occurred to me.
Amazon.com: Some of the very best of the recent graphic novels (I'm thinking of Ghost World and Blankets, along with Black Hole) have been about the lives of teenagers. Do you think there's something about the form that helps to tell those stories so well?
Burns: That's an interesting question, but I don't know the answer. Perhaps it has more to do with the authors--the kind of people who stay indoors for hours on end in total solitude working away on their heartfelt stories... maybe that kind of reflection lends itself to being able to capture the intensity of adolescence.
Amazon.com: In the time you've been working on Black Hole, graphic novels have leapt into the mainstream. (I think--I hope--we're finally seeing the last of those "They're not just for kids anymore!" reviews.) What did you imagine for this project when you started it? What's it been like to see your corner of the world enter the glare of the spotlight?
Burns: When I started Black Hole I really just wanted to tell a long, well-written story. The themes and ideas that run throughout the book had been turning around in my head for years and I wanted to finally get them all out--put them down on paper once and for all. I've published a few other books and while they sold reasonably well, they didn't set the publishing world on fire. I was pretty sure I'd have some kind of an audience for Black Hole, but that was never a motivating factor in writing the book. And my corner of the world is still pretty dark. I guess I'll be stepping into the spotlight for a little while when the book comes out, but I imagine I'll slip back into my dark little studio when it all settles down again so I can settle back into work.

About the Author:
Charles Burns grew up in Seattle in the 1970s. Hs work rose to prominence in Art Spiegelman’s Raw magazine in the mid-1980s and took off from there, for an extraordinary range of comics and projects, from Iggy Pop album covers to the latest ad campaign for Altoids. In 1992 he designed the set for Mark Morris’s delightful restaging of The Nutcracker (renamed The Hard Nut) at BAM. He’s illustrated covers for Time, The New Yorker, and The New York Times Magazine. He was also tapped as the official cover artist for The Believer magazine at its inception in 2003. Burns lives in Philadelphia with his wife and two daughters.