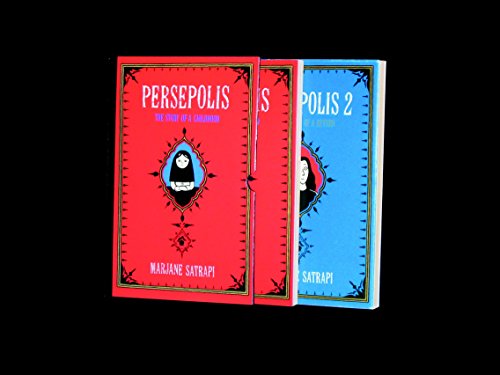 Persepolis: The Story of a Childhood

Wise, funny, and heartbreaking, Persepolis is Marjane Satrapi’s memoir of growing up in Iran during the Islamic Revolution. In powerful black-and-white comic strip images, Satrapi tells the story of her life in Tehran from ages six to fourteen, years that saw the overthrow of the Shah’s regime, the triumph of the Islamic Revolution, and the devastating effects of war with Iraq. The intelligent and outspoken only child of committed Marxists and the great-granddaughter of one of Iran’s last emperors, Marjane bears witness to a childhood uniquely entwined with the history of her country.

Persepolis paints an unforgettable portrait of daily life in Iran and of the bewildering contradictions between home life and public life. Marjane’s child’s-eye view of dethroned emperors, state-sanctioned whippings, and heroes of the revolution allows us to learn as she does the history of this fascinating country and of her own extraordinary family. Intensely personal, profoundly political, and wholly original, Persepolis is at once a story of growing up and a reminder of the human cost of war and political repression. It shows how we carry on, with laughter and tears, in the face of absurdity. And, finally, it introduces us to an irresistible little girl with whom we cannot help but fall in love.
Persepolis 2: The Story of a Return

Here is the continuation of Marjane Satrapi's fascinating story. In 1984, Marjane flees fundamentalism and the war with Iraq to begin a new life in Vienna. Once there, she faces the trials of adolescence far from her friends and family, and while she soon carves out a place for herself among a group of fellow outsiders, she continues to struggle for a sense of belonging.

Finding that she misses her home more than she can stand, Marjane returns to Iran after graduation. Her difficult homecoming forces her to confront the changes both she and her country have undergone in her absence and her shame at what she perceives as her failure in Austria. Marjane allows her past to weigh heavily on her until she finds some like-minded friends, falls in love, and begins studying art at a university. However, the repression and state-sanctioned chauvinism eventually lead her to question whether she can have a future in Iran.

As funny and poignant as its predecessor, Persepolis 2 is another clear-eyed and searing condemnation of the human cost of fundamentalism. In its depiction of the struggles of growing up—here compounded by Marjane’s status as an outsider both abroad and at home—it is raw, honest, and incredibly illuminating.

Marjane Satrapi was born in Rasht, Iran. She now lives in Paris, where she is a regular contributor to magazines and newspapers throughout the world, including the New Yorker and the New York Times. She is the author of Persepolis, Persepolis 2, Embroideries, Chicken with Plums, and several children's books. She cowrote and codirected the animated feature film version of Persepolis, which was nominated for an Academy Award for Best Animated Feature.

"A memoir of growing up as a girl in revolutionary Iran, Persepolis provides a unique glimpse into a nearly unknown and unreachable way of life... That Satrapi chose to tell her remarkable story as a gorgeous comic book makes it totally unique and indispensable."
--Time