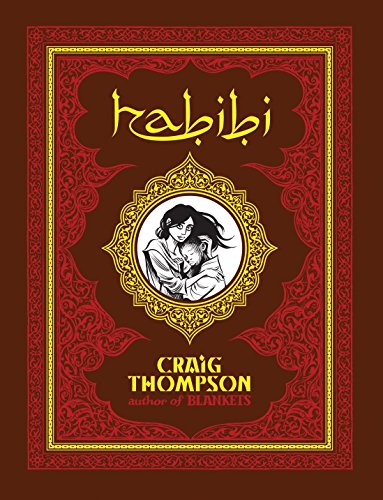 From the internationally acclaimed author of Blankets (“A triumph for the genre.”—Library Journal), a highly anticipated new graphic novel.

Sprawling across an epic landscape of deserts, harems, and modern industrial clutter, Habibi tells the tale of Dodola and Zam, refugee child slaves bound to each other by chance, by circumstance, and by the love that grows between them. We follow them as their lives unfold together and apart; as they struggle to make a place for themselves in a world (not unlike our own) fueled by fear, lust, and greed; and as they discover the extraordinary depth—and frailty—of their connection.

At once contemporary and timeless, Habibi gives us a love story of astounding resonance: a parable about our relationship to the natural world, the cultural divide between the first and third worlds, the common heritage of Christianity and Islam, and, most potently, the magic of storytelling.

Amazon Best Books of the Month, September 2011: Habibi is impressive to hold. It looks like a lost tome, recovered from a different time and place--a fitting package for a comic book that feels like an exotic, bizarre fairy tale. Craig Thompson's inkwork is bold yet intricate. Each page reveals a meticulous symmetry, both in art and narrative, that unravels a sweeping tale that takes readers from the dessert to an industrial wasteland to the inner walls of a harem. Thematically, there's no shortage of ambition here, as Thompson tackles familial and romantic love, one's relationship to their environment, the shared roots of Christianity and Islam, and the effects of industrial modernization. Not all of these conflicts are resolved--in fact, there's more ambiguity than there is clarity--but it's Dodola and Zam, the book's two orphaned lovers, that imbue Habibi with empathy and humanity. Thompson, who is best known for Blankets, one of the most critically lauded comics of the past decade, has crafted another affecting story of passion, humor, and imagination. --Kevin Nguyen

Book Description Hardcover. Condition: New. Hardcover. From the internationally acclaimed author of Blankets (A triumph for the genre.--Library Journal), a highly anticipated new graphic novel.Sprawling across an epic landscape of deserts, ha.Shipping may be from multiple locations in the US or from the UK, depending on stock availability. 655 pages. 1.565. Seller Inventory # 9780375424144