Items related to Turn of the Century: A Novel

Andersen, Kurt Turn of the Century: A Novel

Turn of the Century: A Novel 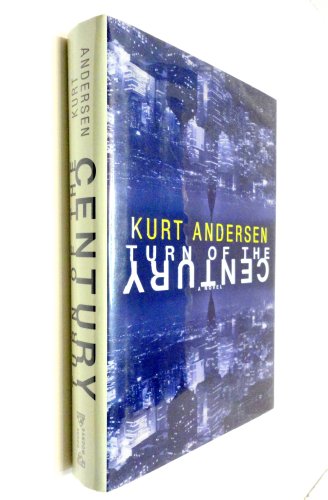 As big and exciting as the next century, this is a novel of real life at our giddy, feverish, topsy-turvy edge of the millennium. Turn of the Century is a good old-fashioned novel about the day after tomorrow--an uproarious, exquisitely observed panorama of our world as the twentieth century morphs into the twenty-first, transforming family, marriage, and friendship and propelled by the supercharged global businesses and new technologies that make everyone's lives shake and spin a little faster.

As the year 2000 progresses, George Mactier and Lizzie Zimbalist, ten years married, are caught up in the whirl of their centrifugally accelerating lives. George is a TV producer for the upstart network MBC, launching a truly and weirdly groundbreaking new show that blurs the line between fact and fiction. Lizzie is a software entrepreneur dealing with the breakneck pleasures and pains of running her own company in an industry where the rules are rewritten daily. Rocketing between Los An-geles and Seattle, with occasional stopovers at home in Manhattan for tag-team parenting of their three children, George and Lizzie are the kind of businesspeople who, growing up in the sixties and seventies, never dreamed they would end up in business. They're too busy to spend the money that's rolling in, and too smart not to feel ambivalent about their crazed, high-gloss existences, but nothing seems to slow the roller-coaster momentum of their inter-secting lives and careers.

However, after Lizzie, recovering from a Microsoft deal gone awry, becomes a confidante and adviser to George's boss, billionaire media mogul Harold Mose, the couple discovers that no amount of sophisticated spin can obscure basic instincts: envy, greed, suspicion, sexual temptation--and, maybe, love. When they and their children are finally drawn into a thrilling, high-tech corporate hoax that sends Wall Street reeling (and makes one person very, very rich), George and Lizzie can only marvel at life's oversized surprises and hold on for dear life.

Like Tom Wolfe's Bonfire of the Vanities, Kurt Andersen's Turn of the Century lays bare the follies of our age with laser-beam precision, creating memorable characters and dissecting the ways we think, speak, and navigate this new era of extreme capitalism and mind-boggling technology. Entertaining, imaginative, knowing, and wise, Turn of the Century is a richly plotted comedy of manners about the way we live now.

Everyone will compare Kurt Andersen's scathingly funny first novel to Tom Wolfe's fictional debut, The Bonfire of the Vanities. Like Wolfe, Andersen is a merry terrorist, a status-attuned assassin with liquid nitrogen in his veins, a prose style with the cool purr of an Uzi, and the entire society in his crosshairs. And like the Man in White's protagonist, Sherman McCoy, Andersen's George Mactier is a master of the contemporary universe--not just Manhattan, but decadent post fin-de-siècle Hollywood, the globe-gobbling, infotainment-tainted news media, and cyberspace from Seattle to Silicon Valley to Silicon Alley.

Turn of the Century opens in February 2000, in a bizarro world with just a tangy twist of futuristic extrapolation. George has parlayed a Newsweek writing job into a PBS documentary into a $16,575-a-week job as a producer at the sinister MBC network. His series, NARCS, is a veritable Cuisinart of fact and fiction in which the actors get to participate in real drug busts and get all the best lines, since they're working from scripts. In the most notorious episode, the dealer they arrest turns out to be an Actors Equity member (thanks to Rent), so he gets union scale and a recurring role.

As George stumbles into a Wolfesque calamity spiral, his wife, Lizzie Zimbalist, ascends to power. Lizzie is a brilliant software entrepreneur: her "force-feedback technology" alternative-history game can sense players' fear. "If you travel to 1792 Paris, for instance, you are designated a besotted peasant or a frightened aristocrat or an angry sansculotte according to your heart rate, blood pressure, and skin conductance; too many twitches, the wrong sort of palpitation, and you're a marquess (or marchioness) headed for the guillotine." Needless to say, her insights into the year 2000 earn her bigtime interest from George's boss and Microsoft. Lizzie is a character at least as vivid as George, and their hectic family life is uncloying and acutely observed.

Andersen's plot (involving Bill Gates's potential death) has more hairy turns than the Hana Highway--read carefully or you'll go off the road. But you're guaranteed a wild ride with amazing characters: an irreverent investor inspired by James Cramer, a hilarious MBC toady, Timothy Featherstone--who's as marvelous a creation as Tony Curtis in The Sweet Smell of Success--and worlds' worth of social caricatures. Kurt Andersen has an uncanny ear for the way we talk now and Turn of the Century is sharp, knowing, and subversive. Let's all pray that it isn't prescient as well. --Tim Appelo

The millennium is here. Barbie World has opened in Vegas. Charles Manson's parole hearing is on live TV. And George and Lizzie are a Manhattan power couple with three kids in private school and take-out from Hiroshima Boy waiting at the door. Lizzie owns a software start-up. George is a TV producer. With cell phones tickling their thighs and gossip buzzing in their ears, their future couldn't be brighter. Until, that is, Lizzie cuts a deal with George's boss and gets an office twenty-one floors above her husband's ... Until all the glitter and the hype threaten to destroy George's and Lizzie's sanity and their marriage ... Until the only thing that can save them is a little understanding -- at a time when everyone is talking but no one can hear a thing.

In his brash, brilliant first novel, media insider Kurt Andersen casts a penetrating eye on our giddy, media-obsessed era. With a keen sense of irony and a storyteller's grace, the co-founder of Spy magazine weaves a tale that is at once a biting satire of America in the near future and a wickedly incisive portrait of marriage, family, love, and friendship. A crackling, cybercharged joyride through our millennium, Turn of the Century is pure, eye-popping entertainment.

1. Turn of the Century: A Novel

2. Turn of the Century: A Novel

3. Turn of the Century: A Novel

4. Turn of the Century: A Novel

5. Turn of the Century: A Novel

6. Turn of the Century: A Novel