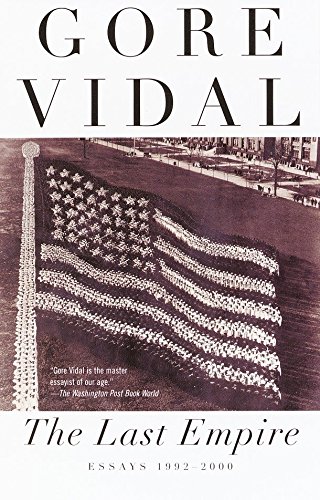 Like his National Book Award—winning United States, Gore Vidal’s scintillating ninth collection, The Last Empire, affirms his reputation as our most provocative critic and observer of the modern American scene. In the essays collected here, Vidal brings his keen intellect, experience, and razor-edged wit to bear on an astonishing range of subjects. From his celebrated profiles of Clare Boothe Luce and Charles Lindbergh and his controversial essay about the Bill of Rights–which sparked an extended correspondence with convicted Oklahoma City Bomber Timothy McVeigh–to his provocative analyses of literary icons such as John Updike and Mark Twain and his trenchant observations about terrorism, civil liberties, the CIA, Al Gore, Tony Blair, and the Clintons, Vidal weaves a rich tapestry of personal anecdote, critical insight, and historical detail. Written between the first presidential campaign of Bill Clinton and the electoral crisis of 2000, The Last Empire is a sweeping coda to the last century’s conflicted vision of the American dream.

“Gore Vidal is the master essayist of our age.” –The Washington Post Book World

“Lively, instructive, lucid and amusing. Vidal has a carefree touch and a humorous air. . . . [He] can be a marvelous wit.” –Paul Berman, The New York Times Book Review

“Indispensable. . . . An excellent read. . . . Provocateur, scholar, historian, novelist, scoundrel, whatever you want to call Gore Vidal–make sure you include ‘national treasure.’ . . . [He] is an original mind, who thinks and sees without regard to convention. That alone makes him required reading.” –The Sunday Oregonian