Items related to In Search of Lost Time, Vol. II: Within a Budding Grove... 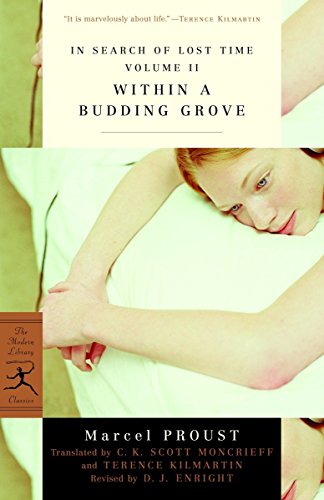 First published in 1919, Within a Budding Grove was awarded the Prix Goncourt, bringing the author immediate fame. In this second volume of In Search of Lost Time, the narrator turns from the childhood reminiscences of Swann’s Way to memories of his adolescence. Having gradually become indifferent to Swann’s daughter Gilberte, the narrator visits the seaside resort of Balbec with his grandmother and meets a new object of attention—Albertine, “a girl with brilliant, laughing eyes and plump, matt cheeks.”

“It is marvelously about life.” —Terence Kilmartin

Marcel Proust was born in the Parisian suburb of Auteuil on July 10, 1871. He began work on In Search of Lost Time sometime around 1908, and the first volume, Swann’s Way, was published in 1913. In 1919 the second volume, Within a Budding Grove, won the Goncourt Prize, bringing Proust great and instantaneous fame. Two subsequent installments—The Guermantes Way (1920–21) and Sodom and Gomorrah (1921)—appeared in his lifetime. The remaining volumes were published following Proust’s death on November 18, 1922: The Captive in 1923, The Fugitive in 1925, and Time Regained in 1927.