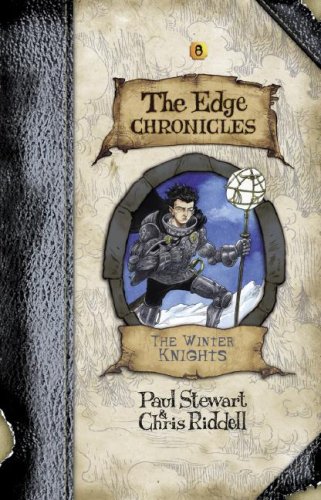 In the great floating city of Sanctaphrax, blizzards howl through the streets as the Edgeworld descends into an endless winter. Quint, the son of a sky pirate, has just begun his training at the Knights Academy—training that involves heading out over the Edge on tethers to develop his flying skills. But when Quint breaks the rules and heads out to Open Sky on his own, he runs into the great sky leviathans known as cloud-eaters and must use all his skill and ingenuity if catastrophe is not to strike the Edgeworld. . . .

About the Author:
Paul Stewart and Chris Riddell are the creators of the hugely successful Edge Chronicles, which have sold over two million copies and have been translated into over thirty languages worldwide. Their other collaborations include the Barnaby Grimes series and the Far Flung Adventures, the first of which, Fergus Crane, won the 2004 Gold Smarties Prize. Paul Stewart is the author of a number of previous titles for children including The Midnight Hand and The Wakening (a Federation of Children's Book Groups Pick of the Year) for the Yearling list. Chris Riddell is an accomplished graphic artist who has illustrated many acclaimed books for children. Winner of many prestigious awards including the UNESCO Prize (for Something Else), the Kate Greenaway Medal (in 2001 and 2004 for Pirate Diary and Jonathan Swift's 'Gulliver') and the Gold Nestle Prize for Ottoline and the Yellow Cat, he is also the political cartoonist for the Observer.
Excerpt. © Reprinted by permission. All rights reserved.:
·chapter one·
The School of Colour and LighT STudies
The academic, in his grubby, paint-spattered robes of faded ‘viaduct’ blue, turned the crank lever with his free hand. The cog wheels in the rotating tower high above him chattered and squealed like angry ratbirds, and a shaft of light cut through the dusty air. The academic levelled the brush in his other hand and tilted his head to one side, his pale yellow eyes fixed on the youth before him.

‘A little more to the left now, I think, Master Quint,’ he said, his voice soft but insinuating. ‘So the light catches you. Just so . . .’

Quint did as he was told. The early morning light streaming in from the high tower window fell across his face, glinting on his cheekbones, the tips of his ears and nose and, with its rusting pipes and gauges, the battered armour he wore.

‘Excellent, my young squire,’ the academic muttered approvingly. He dipped the tip of the hammelhornhair brush into the white paint on his palette and dabbed lightly at the tiny painting on the easel before him. ‘Now we must let the light work its magic,’ he murmured. The dabbing continued. ‘The highlights complete the picture, Master Quint. But I must insist that you hold still.’

Quint tried to maintain the pose – but it wasn’t easy. The tower was small and airless, and the heady odours from the pigments, the pinewood oils and the thinning varnishes were combining to make his eyes water and his head ache. The rusty, ill-fitting armour chafed his neck, and his left leg had gone quite numb. Besides, he was dying to see the finished portrait. It was all he could do not to turn right round and inspect it for himself.

‘The dawn light,’ clucked the academic. ‘There’s nothing like it for illuminating the subject . . .’ His pale yellow eyes darted back and forth over Quint’s features. ‘And what an illustrious subject we are, my young squire.’

He chuckled, and Quint tried not to blush.

‘The protégé of none other than the Most High Academe of Sanctaphrax . . .’ He turned away and began stabbing at the palette like a woodthrush after a spanglebug. ‘How lucky you are, Master Quint, not to have to scrabble about with the rest of us in the minor schools, but to be given a place at the most prestigious academy of them all. I wonder . . .’ The academic’s voice was laden with sudden spite. ‘I wonder what you actually did to deserve it?’

The academic’s eyes were fixed on Quint’s face once more. They were so pale that there was almost no difference between the irises and the yellowish white that surrounded them. It was a mark of his trade, Quint told himself, trying not to shudder. Just as years of working as an Undertown rope-turner resulted in spatula-shaped fingers, and just as a slaughterer tanner from the Deepwoods ended up with skin the colour of blood, so, as the years passed, the eyes of Sanctaphrax portraitists were gradually bleached by the vapours of the thinning varnishes they used – and Ferule Gleet had been a portraitist for many, many years.

‘I was the Most High Academe’s apprentice . . .’ Quint looked down, his cheeks blazing as he remembered the monstrous gloamglozer and the night of the terrible fire.

‘Keep still!’ rasped Gleet, irritatedly dabbing at the portrait. ‘Ah, yes,’ he smiled thinly. ‘There was that fire at the Palace of Shadows, wasn’t there? Strange and dreadful business . . . How is the Most High Academe? Recovering well, I hope.’

The pale yellow eyes bored into Quint’s once more.

‘As well as can be expected,’ the youth replied, but the words rang hollow in his ears as he thought of his mentor lying in the gloomy bedchamber at the School of Mist.

Linius Pallitax had suffered grievously at the hands of the terrible gloamglozer. He had almost been destroyed. Perhaps it would have been better if he had, for now he never left his bed, and his haunted eyes stared into the distance, seeing neither his faithful servant, Tweezel, nor Quint, his apprentice – nor even his own daughter, Maris, who sat beside him for so many hours, praying for him to recover.

Ferule Gleet daubed at the tiny painting in silence for a moment.

‘As well as can be expected, eh?’ he mused at last. ‘Doesn’t sound too good. You wouldn’t want anything to happen to him, my fine young squire. Not in your position.’

‘My position?’ said Quint, trying not to move.

‘You’re the High Academe’s protégé, aren’t you? Without him, you don’t expect that the Knights Academy would accept you into its hallowed halls, do you? Of course not!’ Ferule shook his head. ‘Sanctaphrax born and bred, that’s always been the rule. The rest of us have to get by at the minor academies as best we can.’

He wiped his brush on a piece of rag, and turned the easel round.

Quint found himself staring at the miniature painting of a young knight academic in gleaming armour, with deep indigo eyes and a smile on his face. Ferule Gleet of the School of Colour and Light Studies had done a fine job all right. Quint shivered.

‘Is anything wrong?’ Ferule asked.

He had no intention of telling the pale-eyed academic about the memories the miniature painting had stirred – memories of the first time he’d had his portrait done.

How young he’d been then. Four, maybe five years old; the youngest of six brothers. His father, Wind Jackal, had commissioned the mural of the whole family for the grand hall of their palace in the Western Quays. What happy days they’d been. But they hadn’t lasted, he thought bitterly. Within a year of the painting being completed, Turbot Smeal – his father’s treacherous quartermaster – had torched his master’s house. Quint’s mother and brothers had perished in the blaze, and with them, the painting itself had been destroyed.