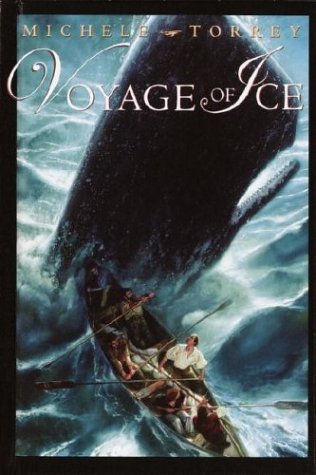 All Nick ever wanted to be was a whaling captain, like his father before him. What could be more glorious than the life of a whaleman, battling mighty sperm whales and returning home rich as Midas? So when his older brother Dexter signs aboard the Sea Hawk, Nick won’t stand to be left behind.

But life at sea is very different from what either Dexter or Nick expected. They are mercilessly overworked by a cruel and dangerous captain. The officers think nothing of beating the crewmen within an inch of their lives. And that’s only the beginning. When an awful turn of fate leaves them stranded in the harsh Arctic winter, they encounter the toughest battle of all—and this one is for their very survival.
From the Hardcover edition.

Michele Torrey, a voyager herself, has visited over 30 countries. She is also the author of To the Edge of the World and the Doyle and Fossey, Science Detectives, mystery series. The author lives in Auburn, WA.
From the Hardcover edition.

Grade 6-10–A gripping story wrapped around the theme that there is no glory in whaling. Desperately wanting to follow in the footsteps of their late father, the captain of a whaler, Dexter and Nick leave behind their easy life with their aunt in New Bedford and sign aboard the Sea Hawk as soon as Nick turns 15. However, Nick soon discovers that he hates everything about the job–the captain, the crew, the harsh punishments, the danger, and the killing and processing of whales. The only bright spots are the rare sightings of the captain's daughter, and he knows better than to even look at her directly for the fear of dire repercussions, and being with his brother. Nick's experiences include an attempted desertion, sailing through the ice-filled waters of the Arctic, a shipwreck, and a struggle to survive the winter. The novel will educate as well as entertain, as there is a lot of adventure intertwined with the accurate descriptions of shipboard life, survival in a hostile environment, and the Native people who eventually rescue the castaways. The main characters, and some of the lesser ones, are well developed and readers come to care about their fate. In addition to being a good seafaring yarn, this title could be used as parallel reading about the history of 19th-century New England and whaling. An extensive glossary of whaling and nautical terms, a lengthy bibliography, and a historical note are appended.–Nancy P. Reeder, Heathwood Hall Episcopal School, Columbia, SC
Copyright © Reed Business Information, a division of Reed Elsevier Inc. All rights reserved.

Book Description Random House Children's Books. Library Binding. Condition: Good. A copy that has been read, but remains in clean condition. All pages are intact, and the cover is intact. The spine may show signs of wear. Pages can include limited notes and highlighting, and the copy can include previous owner inscriptions. An ex-library book and may have standard library stamps and/or stickers. At ThriftBooks, our motto is: Read More, Spend Less. Seller Inventory # G0375923810I3N10