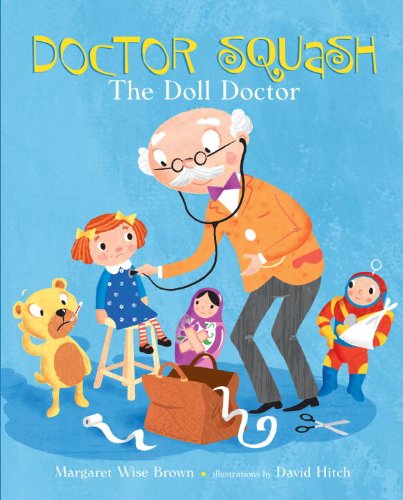 When tiny toys of all kinds cry, Doctor Squash comes running! Always ready to mend and soothe, to pat and prescribe, Doctor Squash helps each doll stay "fit as a fiddle and right as rain." And when the good doctor himself falls ill, you can be sure there will be a crackerjack team of dolls-turned-doctors ready to rush to his aid!

Beautifully reillustrated by David Hitch, this whimsical Golden Book from the 1950s will enchant a new generation.
From the Hardcover edition.

Margaret Wise Brown, perhaps best known as the author of GOODNIGHT MOON (Harper), wrote countless children's books inspired by her belief that the very young could be fascinated by the simple pleasures of the world around them. She wrote several bestselling Little Golden Books including MISTER DOG, SAILOR DOG, and THE COLOR KITTENS.

David Hitch has illustrated children's books in the US and in England. His work has also appeared in the New Yorker.
From the Hardcover edition.

K-Gr 3–This newly illustrated reissue of a 1952 Golden Book recounts the illnesses of various dolls–squeaky soldier, teddy bear with a bloody nose, fireman with a broken leg, Indian with poison ivy, etc–and Doctor Squash, who comes running to dispense medicine and advice as needed. When the good doctor falls ill, the toys get the chance to return the favor and take care of him. Hitch's cartoon illustrations complement the text well with bright colors and great facial expressions. They are updated from the original (no Mammy doll) but still have an old-fashioned look. References to the snowman doll's illness and “wild Indian” have been removed. Perplexingly, the story does continue to refer to cough drops as “good as candy and just as pretty” and to mention writing prescriptions for measles, mumps, chicken pox, and whooping cough. Updated, but still a bit out-of-date.–Catherine Callegari, Gay-Kimball Library, Troy, NH. (c) Copyright 2010. Library Journals LLC, a wholly owned subsidiary of Media Source, Inc. No redistribution permitted.