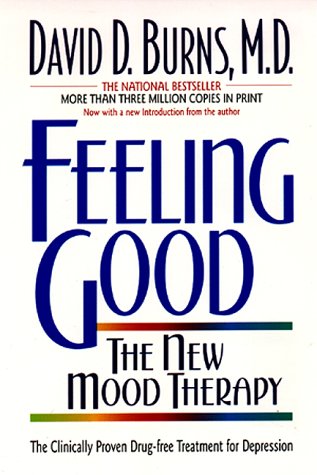 The good news is that anxiety, guilt, pessimism, procrastination, low self-esteem, and other "black holes" of depression can be cured without drugs. In FEELING GOOD, eminent psychiatrist, David D. Burns, M.D. outlines the remarkable, scientifically proven techniques that will immediately lift your spirits and help you develop a positive outlook on life:
-- Recognize what causes your mood swings
-- Nip negative feelings in the bud
-- Deal with guilt
-- Handle hostility and criticism
-- Overcome addiction to love and approval
-- Beat "do-nothingism"
-- Avoid the painful downward spiral of depression
-- Build self-esteem
-- Feel good every day

BEGIN NOW, TO EXPERIENCE THE JOY OF FEELING GOOD

David D. Burns, MD, a clinical psychiatrist, conveys his ideas with warmth, compassion, understanding, and humor unmatched by any other writer in the self-help field. His bestselling Feeling Good: The New Mood Therapy has sold more than three million copies to date. In a recent national survey of mental health professionals, Feeling Good was rated number one -- from a list of more than one thousand -- as the most frequently recommended self-help book on depression. His Feeling Good Handbook was rated number two in the same survey.

Audiobook Narrator Bio: George Newbern is an Earphones Award-winning narrator and a television and film actor best known for his roles as Brian MacKenzie in Father of the Bride and Father of the Bride Part II, as well as Danny in Friends. As a voice actor, he is notable for his role as Superman on the Cartoon Newtork series Static Shock, Justice League, and Justice League Unlimited. He holds a BA in theater arts from Northwestern University.