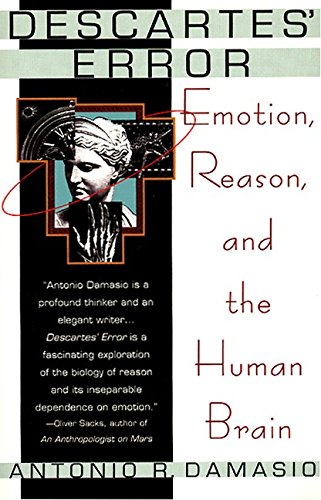 In this wondrously lucid and engaging book, renowned neurologist Antonio Damasio demonstrates what many of us have long suspected: emotions are not a luxury, they are essential to rational thinking.

Descartes' Error takes the reader on an enthralling journey of scientific discovery, starting with the case of Phineas Gage--a construction foreman who in 1848 survived a freak accident in which a 3 1/2 foot iron rod passed through his head--and continuing on to Damasio's experiences with modern-day neurological patients affected by brain damage. Far from interfering with rationality, his research shows us, the absence of emotion and feeling can break down rationality and make wise decision making almost impossible.

"Although I cannot tell for certain what sparked my interest in the neural underpinnings of reason, I do know when I became convinced that the traditional views on the nature of rationality could not be correct". Thus begins a book that takes the reader on a journey of discovery, from the story of Phineas Gage, the famous nineteenth-century case of behavioral change that followed brain damage, to the contemporary recreation of Gage's brain; and from the doubts of a young neurologist to a testable hypothesis concerning the emotions and their fundamental role in rational human behavior. Drawing on his experiences with neurological patients affected by brain damage (his laboratory is recognized worldwide as the foremost center for the study of such patients), Antonio Damasio shows how the absence of emotion and feeling can break down rationality. In the course of explaining how emotions and feelings contribute to reason and to adaptive social behavior, Damasio also offers a novel perspective on what emotions and feelings actually are: a direct sensing of our own body states, a link between the body and its survival-oriented regulations, on the one hand, and consciousness, on the other. Descartes' Error leads us to conclude that human organisms are endowed from the very beginning with a spirited passion for making choices, which the social mind can use to build rational behavior.

Antonio Damasio is a University Professor, David Dornsife Professor of Neuroscience, Psychology, and Neurology, and director of the Brain and Creativity Institute at the University of Southern California. Damasio's other books include Self Comes to Mind, Looking for Spinoza and The Feeling of What Happens. He has received the Honda Prize, the Prince of Asturias Award for Technical and Scientific Research, and, shared with his wife Hanna, the Pessoa, Signoret, and Cozzarelli prizes. Damasio is a fellow of the Institute of Medicine of the National Academy of Sciences, the American Academy of Arts and Sciences, the Bavarian Academy of Sciences, and the European Academy of Sciences and Arts. He lives in Los Angeles.